"Why does fate play such tricks with poor, helpless worms?"
- Sherlock Holmes (Sir Arthur C. Doyle's "The Boscombe Valley Mystery," from The Adventures of Sherlock Holmes, 1891)

Last week, I wrote a fervidly enthusiastic and laudable review of Harriet Rutland's debut novel, Knock, Murderer, Knock (1938), but now I've read her second novel and fear I might have over-praised her maiden effort – because Bleeding Hooks (1940) is the real-deal.

Knock, Murderer, Knock is an odd, quirky portrayal of the closed-circle of suspects with an eccentric cast of characters and a string of bizarre, grotesque murders with knitting-needles. On the surface, it's a classically-styled detective story with a clever plot straying from the beaten track. So, in that regard, it's very satisfying and attractive book for the experienced armchair detective. 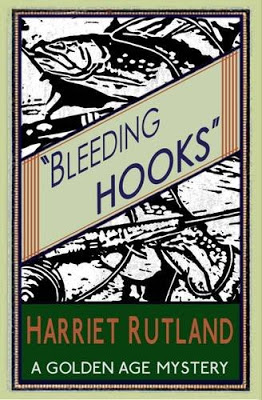 Bleeding Hooks is a brightly written, colorful story with a plot strolling along a more traditional route, which is strewn with twists and turns. The characters toddling along a beautiful, evocative drawn Welsh setting and the double-layered explanation has a last-minute with a dusting of originality.

The backdrop of the story is Aberllyn, a quaint fishing village in Wales, where a picturesque inn stands, named The Fisherman's Rest, which is a snug, cozy place that can easily compete with the larger Lakeside Hotel and often finds hotel-guests on its doorstep – to "beg for a room" no matter how "small and poorly furnished."

Only drawback for the holidaymakers is having to put with Mrs. Ruby Mumsby: a vulgar, slug-like widow who'd "ran after anything in trousers" and the dread of the local ghillies (a fishing-and hunting guide). It's a small discomfort that seemingly sorted itself out when Mrs. Mumby's body is found at the side of a lake with a salmon fly deeply embedded in her hand.

Dr. Roberts determines death was caused by a combination of poor health and shock from the deep wound, which caused her heart to give out, but a vacationing Mr. Winkley harbors suspicion of foul play and discreetly starts to investigate the sudden death – assisted by a pair of "Bright Young Things."

Pansy Partridge and Vyvyan Gunn, primarily referred to be their nicknames of "Pussy" and "Piggy," enthusiastically throw themselves into the roles of amateur sleuths, which furnished the plot with a pleasant amount of layman detection.

In his introduction for the Dean Street Press edition, Curt Evans likened Pussy and Piggy to Tommy and Tuppence from such Agatha Christie novels as The Secret Adversary (1922) and Partners in Crime (1929). Which is a fair comparison. However, they reminded me of two other partners in mischief, namely Vanya and Lucinda, from Helen McCloy's marvelous Mr. Splitfoot (1968) with a dash of Kelley Roos' Jeff and Haila Troy.

Well, they go about their self-imposed task with the zest and zeal befitting of a pair of amateur detectives, but their poking around and questioning aren't making them exactly popular with their fellow guests – which eventually results in an attempt on the life of Pussy.

The cast of potential killers, by the way, consists of the owners of the inn, Mr. and Mrs. Evans. Mrs. Mumsby long-suffering ghillie, John Jones. A veteran of the Great War, Sir General Courtney Haddox and his spinster sister, Ethel, who behaved suspiciously when the body was discovered. Pussy's mother, Mrs. Partridge. A couple, Mr. and Mrs. Pindar, who are affectionately referred to as the Pandas by Pussy. A prattling sport fisher, Major Jeans, who prefers to make his own fish flies and frequently utters "bleeding hooks," which gave the book its title. Mr. Weston and his young son, Claude, who's promising music-hall performer and quickly became my favorite character in the story, because I love magician-characters and magic-acts in detective stories.

So, while Piggy and Pussy are antagonizing or annoying everyone around them, Winkley has been far more subtle, which eventually gives him the opportunity to bait a hook, cast a line and patiently wait for a nibble – before reeling in the murderer. And it's quite a catch!

I also feel redeemed for having spotted the murderer and the motive, because in Knock, Murderer, Knock I only managed to get hold of a bunch of red herrings. However, Rutland did include a final pull of the rug that surprised both me and Mr. Winkley. I agree with John Norris, who reviewed the book under its US title, The Poison Fly Murder, that this final revelation makes the book somewhat of a minor masterpiece.

There's literally nothing I did not like about Bleeding Hooks, which is rare, because I can usually find something to nitpick about. But this one of those rare mysteries in which every aspect of the story seemed to co-exist in perfect harmony with one another. The plot, characters, background and atmosphere as well as the small, but interesting, tidbits about fly fishing and everything surrounding it made this easily (one of) the best reads of 2015.

I sincerely hope Rutland's third and final mystery novel, Blue Murder (1942), is able to hold itself up against its predecessor, because Bleeding Hooks is a tough act to follow.