With a Hint of Gloom

"Alice soon came to the conclusion that it was a very difficult game indeed."
- Lewis Carroll ("The Queen's Croquet-Ground," from Alice's Adventures in Wonderland, 1865)

Cold Blood (1952) is the seventh and last full-length case Lionel Townsend recorded for Sgt. Beef, which ended the series with a dramatic finish and a wink. 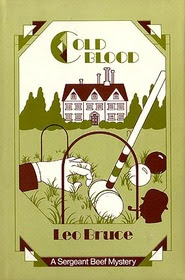 Townsend observes in the opening chapter how the Ducrow-case seemed to have changed Sgt. Beef. The "old chuckle was still heard at times," but their meddling at the "gloomy house" with its "overpowering atmosphere of watchfulness and evil" left its marks on the psyche of the sergeant – becoming more earnest and "a little bit afraid."

However, in spite of its serious coating, the story is plaided with usual humorous remarks and comedic references. When they first read about the Ducrow affair in the newspaper, Townsend remarks Beef needs "a great deal more than successful detection" to be a famous detective. He must stand out and be different. Which can be accomplished by simply resembling a crocodile every couple of pages, "like Mrs. Bradley," or "talk like a peer in an Edwardian farce" like Lord Peter Wimsey.

A similar, wonderful conversation takes place between Beef and his client, Theo Gray, who engages him to find the murderer of Cosmo Ducrow, but the sergeant wants to know why he came to him and wanting the best man for the job isn't accepted as an answer – because there are some better known and better written up detectives than Beef.

Well, the answer is that Hercule Poirot "was engaged on another case," Albert Campion was "not interested" and a rejection from Beef would've put Gray on "on the phone to Inspector French." It's passages like these that helped Bruce in becoming a fan-favorite, because mystery geeks love reading this type of genre-related, referential-type of humor.

Anyhow, Beef and Townsend learn that Cosmo Ducrow was "worth half a million," which he inherited from his father, but was described as a neurotic, hermit-like recluse – who was "shy to the point of misanthropy."

Ducrow buried himself in a small, Kentish village in a gloomy-looking, Georgian house surrounded by a small, but trusted, circle of intimates. There is a younger wife, Freda, who used to be his nurse. A nephew, Rudolf, alongside with his wife and Theo Gray is a long-time, live-in friend and there's a Major Gulley – who's in charge of running the estate. The group of rounded out by the servants and one of them is a murderer.

One early morning, Cosmo's body is found near the croquet lawn with the back of his head pulverized and besides him lay a croquet mallet, which "had been used to give him three or four terrible blows." The evidence and local police favor Rudolf as the murderer, which adds a hint of doom to the already present gloom.

Initially, Sgt. Beef barrages the facts and people in the case with his typical, blunt approach and "cryptic statements" that "only grow more obscure" upon questioning, but soon comes to the conclusion that more than his reputation is at stake on how he handles the case.

The case comes to a conclusion on a tension-filled evening when Beef arrives drunk and too late for an appointment at the Ducrow-home, which ends in a deadly rendez-vous on the rooftop of the house and the scene will give fans of Jonathan Creek and Sherlock a serious case of déjà-vu. Well, now I know where the idea for this gambit originated.

Anyhow, what's even more interesting than the ensnarement of the murderer is the classical nature of the solution, clues and, generally, how the entire plot hang together.

Cold Blood was penned and published in the twilight years of the Golden Age, but Bruce even included a "Challenge to the Reader," which states that Townsend had "scrupulously told the reader all Beef knew" and how "the reader may like to try his hand at finding the answers to the puzzle" – without resorting to "cheating" or "reading or looking into the remaining chapters."

During the first half of Cold Blood, I suspected Bruce was, as they say in England, taking the micky out of S.S. van Dine, but he was actually tipping his bowler hat at his brethren across the pond.

So, all in all, Cold Blood is a very accomplished, classically-styled mystery that harked back to the best from the 1930-and 40s and a better send-off than some of Beef's more well-known and famous colleagues, who had "been written up better," received. Recommended!