Last month, I posted a review of The Cask (1920), which is an early classic from the Golden Age and embarked Freeman Wills Crofts on a career as one of the genre's more technically minded plotters – and was even considered as one of the "Big Five" British detective writers of the 1920-and 30s.

The plot of Freeman's debut novel concerned a cask "sent from France to London" and "was found to contain the body of a young married Frenchwoman." It required the combined efforts of Scotland Yard, Sûreté and the services of a private investigator to prevent the case from being shelved as unsolved. 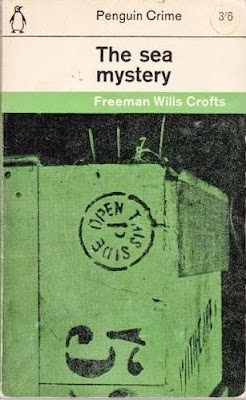 I quite enjoyed that monument of a crime-novel with its old-world air, but the reason for bringing it up here is that Inspector French mentioned it in The Sea Mystery (1928), in which he observes that his current problem shared some similarities with "a case investigated several years ago by my old friend Inspector Burnley" – who has since retired from the force.

Funny how French's spoiler-ridden comments on The Cask confirmed my initial, unsubstantiated hunch of it being a companion piece to The Sea Mystery.

The Sea Mystery opens on a pleasant, balmy evening in September on the calm, smooth surface of the Burry Inlet, "on the south coast of Wales," where 14-year-old Evan Morgan is spending his last day-off fishing with his father. However, the only thing they managed to catch that day are the remnants of a perfect crime. Or an attempt at one anyway.

What they hooked was a solid, wooden packing crate, which was bare of "any helpful marks," but the same can’t be said for its putrid content: consisting of a horrendously decomposed body of a man, clad only in underclothes, whose features "had been brutally battered in" and "entirely obliterated" until "only an awful pulp remained." The medical-evidence places the crime five to six weeks ago.

Inspector French is faced with a problem that "seems absolutely insoluble," but believes "it is almost impossible to commit a murder without leaving a clue" and a logical, methodical mind, combined with experience, can get you pretty far.

So, first things first, French sets out to reconstruct how the crate got to the bottom of the inlet, which is done with a bit of math and a practical experiment. These first, preliminary inquiries have a pleasant amount of logical, science-based detective work, but there's a potential plot-hole.

Very early on, French determines a crane-lorry was used in the disposal of the crate, which is traced to a motorcar company, who rented out such a machine and they asked for a 300-pound deposit – which was quite a lump of money in those days. But it's never investigated if such a sum was drawn and re-deposit from a bank account around the time the crane-lorry was taken out. Which I assumed would be a rational route to follow in an investigation that, up to that point, was starved for solid, tangible clues.

A second plot-thread is introduced and involves a double disappearance from a location that'll immediately capture the attention and imagination of every mystery reader: namely the desolate, haunted and treacherous bogs and mires of Dartmoor – inextricably linked to Sir Arthur Conan Doyle's The Hound of the Baskervilles (1902).

One night in August, a pair of businessmen, named Charles Berlyn and Stanley Pyke, where on their way back home when their car broke down and they attempted to cross the moors and were never seen again in this world. The well-read, observant mystery reader should note the similarities between the plot of The Stoneware Monkey (1939) by R. Austin Freeman and the theories arising from the possible connections between both cases, which I thought was interesting. But not as interesting as the eventual explanation!

Crofts only provided French with a small pool of suspect to fish in, but managed to drag a clever and classically styled solution from it that was pure Golden Age. It won't leave the seasoned armchair detective god smacked, but they'll admire the well-clued, intricate plot solved by an intelligent and competent policeman – who's nonetheless as fallible and prone to mistakes as you and me.

Which made French more relatable than I expected and permanently shattered the preconceived notion, I once held, of Crofts as a dull, boring writer who had turned detective-stories into math homework assignments. Not the case at all! I'll definitely return to Crofts before too long. I just hope my tired brain has done some justice to The Sea Mystery.

Well, I'll be back soon with another review of a vintage, Golden Age mystery.
Geplaatst door TomCat on 10/21/2015