"I often think that a highly expert archaeologist would make a perfect detective. He has the education that the best of professional policemen often lack and the knowledge of things as such that the theorist and literary man never has at all."
- Canon Burbery (Stanley Casson's Murder by Burial, 1938)

In his introduction for Ten Thousand Blunt Instruments and Other Tales of Mystery (2010), Bill Pronzini described Philip Wylie as a versatile writer who had a broad range of interests, encompassing many fields of expertise, such as science, education, deep-sea fishing, UFOs and pretty much every kind of genre-fiction out there – including our beloved detective-and thriller stories.

Wylie's detective stories that are of special interest to me are, of course, those catalogued in Robert Adey's Locked Room Murders and Other Impossible Crimes (1991). Hey, I came close to churning out five successive blog-posts without touching upon a single locked room mystery or rambling semi-coherently about impossible crime stories in general. It was an untenable state of affairs and you know it! 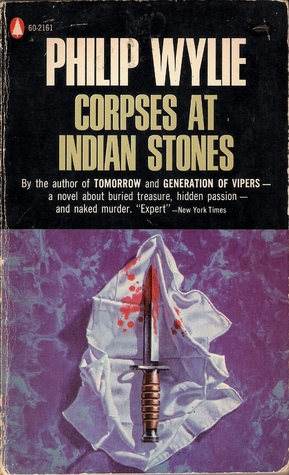 Corpses at Indian Stones (1943) is, reportedly, the only mystery novel Wylie wrote single-handedly and collaborated with Edwin Balmer on some of his other forays into the genre such as Five Fatal Words (1932) – which also happened to be a locked room novel and one I'll be reading before long. But lets get this review out of the way first.

I think the first thing I should mention about Corpses at Indian Stones is that Wylie used both the figure of the amateur sleuth and the traditional mystery as vehicles for a very peculiar coming-of-age story. One with a protagonist who's already in his thirties.

The detective duties in Corpses at Indian Stones are relegated to an introversive, classically named professor of anthropology and distinguished archaeologist, Agamemnon Telemachus Plum, who'd spend most of his days digging up old bones and excavating ancient cities.

Professor Plum is referred to by everyone as "Aggie" and has come to "prefer a book to a tea dance" and "an assorted stack of petrified bones to a pack of playing cards," which came from spending his days "seal-hunting in kayaks" and "pushing dugouts into the Everglades and up the reaches of the Amazon" – basically living in the boys' adventure stories from his youth.

Unfortunately, for Aggie, his aunt, Sarah, has plans to drastically change all of that. She believes the time has come for Aggie to get a wife and making sure the family name lives on. Luckily, for her, they're going on holiday together and therefore has ample opportunity to find a suitable match for her nephew.

They'll be spending the summer days together at a place where Aggie left some memories from his youth, a place named Indian Stones in upstate New York, which brings him back into contact with people he hadn't seen for decades.

However, his first, genuine recorded emotion in this story was getting misty-eyed when being reunited with the objects from his childhood, such as "banners, pictures, trophies, knickknacks and books," in his old bedroom – which is fitting for a misanthropic archaeologist. He also retraces some of the routes he had memorized as a teenager of the surrounding woods, but that's where the trouble begins as he stumbles across the first, suspicious-looking death in the area.

Jim Calder was an unpopular figure at Indian Stones. He had managed the finances of several prominent residents with varying degrees of success, which made Calder's presence at such a tranquil place like having "a ghoul at a feast," but did this provoke someone in doing something irrevocable? Calder's cold, lifeless body is found trapped between a pair of heavy logs of a deadfall, which is a bear trap and the trigger seems to have required a heavy pull. And that places a prominent question mark behind the possibility of it being an accident.

Aggie begins to act as a sort of unofficial deputy to Captain Wesley "Wes" Wickman, a good-humored state trooper, who doesn't seem to mind all too much that someone's meddling in his case – which he's willing to write-off as a simple accident.

So, while the professor is slowly becoming used to socializing (read: being domesticated) he wades through such nebulous clues as a fox with a dog collar and a calling card pinned with a knife to a door. A guest who didn't show up and a submerged car with veal bones as its "cargo." A forgotten, hidden piece of architecture of the place they're staying and it's connection to the financial panic of 1907, Wall Street Crash of 1929 and the gold hoarding during the 1930s, but the best possible evidence for murder proved to be a second body.

The local doctor, George Davis, was seen taking photographs of the accident-site and evidently made someone very nervous, because he's discovered in his makeshift darkroom with a hunting knife buried in his chest. However, complicating a verdict of a plain and simple homicide is the locked-and bolted door and a window the size of a book, which makes the doctor's violent passing either a case of suicide or an impossible murder.

Because the reader knows just as well as Aggie that the Dr. Davis was murdered, but the question is how the killer left a door locked-and bolted on the inside or a passed through a tiny window.

The answer to that particular question was disappointingly simplistic, but there were other interesting aspect about the explanation that should be pointed out. It's one of those tricks that's hard to believe was pulled off in one go, especially considering the lack of wiggle room the murderer had to work with, but Wylie carefully avoided that particular pitfall and in the process provided an original explanation as to why the telephone lines were pulled down. A more original explanation would've been preferred, but Wylie worked well with what he put into the plot.

Well, I feel like I've been droning on without saying too much of substance, because Corpses at Indian Stones is essentially a light-weight mystery novel with an easily discernable plot, which is why I have been dancing around the finer plot-details – afraid of giving away anything of importance. But I liked it, because despite its shortcomings and simplicity, it's a very enjoyable detective story with an interesting sleuth who solves a couple of bizarre murder during one of the most important weeks of his personal life. I also loved how his background and skills as an archaeologist was used to literarily unearth parts of the truth towards the end and even dug up something a little more animated than your basic, run-of-the-mill skeletons.

So, yes, Corpses at Indian Stones is less than perfect as a detective story, but I still very much enjoyed the read and the book comes recommended if you simply love a fun, little detective story – or an attempt at one. I'd also recommend reading John Norris' review on Pretty Sinister Books, which interestingly contrasts the book with Wylie's other, non-mystery novels.

Well, that was almost two pages worth of text with very little to no substance at all, but, as always, I'll try to do better in my next post.
Geplaatst door TomCat on 11/02/2015