The League of Detectives

"I know, my dear Watson, that you share my love of all that is bizarre and outside the conventions and humdrum routine of everyday life."
-  Sherlock Holmes (Sir Arthur C. Doyle's "The Red-Headed League," from The Adventures of Sherlock Holmes, 1892)

The 54th volume of Case Closed, known in a large chunk of the world as Detective Conan, continues where the previous book ended, which is with the concluding chapters of a peculiar story that began on a similar note as the Sherlock Holmes tale that provided the opening quote for this review.

In the final chapter of the previous volume, Eisuke Hondo directed the attention of Edogawa Conan and Richard Moore to a man who's grossly overpaid for simply picking up trash and bringing it to a parking lot – a whopping 50,000 yen per trip! 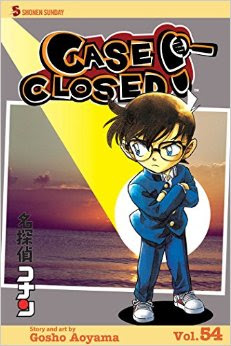 Something is rotten on the island of Japan! Of course, they soon stumble across a murder connected to the garbage collecting business: a woman was shot and killed in her home during what appears to have been botched burglary. The explanation for the shooting was simple enough, but everything became too involved and entangled where the missing jewelry was concerned – which dragged down a simple and lightweight story. However, the explanation for the bullet's trajectory remains a noteworthy aspect of the plot.

The second story in this volume finds Conan, Doc Agasa and members of the Junior Detective League on a snowboarding trip in the mountains. It's there where they meet a group of art college students. They're working on a prototype for their senior project, a snow sculpture, but something is deeply amiss within the group and, before long, one of them is discovered dead – drowned in a hot spring-fed lake beneath a cliff.

It's assumed it was a tragic accident, but Conan suspects foul play and starts to reconstruct what happened based on such clues as the taste of salt and a decapitated snowman. The solution was clever, if somewhat predictable. I think it would've worked better if it was expended upon and retooled as an impossible crime, in which it's suggested the murderer had the ability to be in two places at the same time, i.e. at the top of the cliff and by the lake beneath it. It really would've made for a better story.

The two subsequent stories are known in Japan as "Three Days with Hattori Heiji," who is called Harley Hartwell in the English editions, which are the main course of this and the next volume.

In the first story, a young Buddhist monk discovered the bloodied remains of a woman in an annex building of the monastery: the woman lying on the floor with "a knife in her gut," but when the police arrived the body had vanished without a trace – which include the blood that must have stained the tatami mats. The body reappears shortly after, but vanishes under the same, nearly impossible circumstances from the annex building. It's a minor, but fairly clever, story that could only occur in Japan. Well, under these particular conditions anyway.

The second part of the "Three Days" story-arc has Conan tagging along with Harley Hartwell to a deserted and isolated island. It’s the location for a TV-special about Japan's so-called "Teen Detectives," which include Natsuki Koshimizu ("Teen Detective of the South") and Yunya Tokitsu ("Teen Detective of the North"). Hartwell represents the West and Jimmy Kudo the East, but, in his "absence," his place was given to Saguru Hakuba who appeared in a similar case in volume 30 – but ends up surrendering his place to Conan. The game begins when a member of the TV-crew is found bound-and gagged in a locked room, but things soon become serious when one of the detectives is brutally murdered in just such a locked room.

Of course, this major case will be continued in the next volume, but, some years ago, I watched the TV-special based on this story and still remember its solution. So I can keep myself from immediately rushing to the next volume. However, I still found myself enjoying reading the original source material and Aoyama noted in his after word that he "spent a lot of time creating the idea for this locked room mystery," which I remember to be excellent. Once again, if you're not reading this series, you're simply robbing yourself.

By the way, despite that praise, I breezed disrespectfully through this review, but that’s because I'm trying to have a second review up tomorrow. Stay tuned.