"If you lay down with dogs, you get up with fleas."
- proverb

Genre historian and author of Masters of the "Humdrum" Mystery (2012), Curt Evans, proclaimed Harriet Rutland as "one of the Golden Age English mystery fiction's most original and interesting writers," which is a claim backed by empirical evidence – e.g. Knock, Murderer, Knock (1938) and Bleeding Hooks (1940). However, Rutland's third and final outing as a mystery novelist was something different altogether.

Blue Murder (1942) appears to have been heavily influenced by the turmoil in the author's personal life. 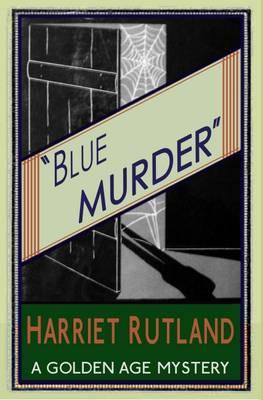 You'll have to read Evans' introduction for the finer details, but suffice to say that the care of an infant son and a deteriorating marriage ending in divorce, against the background of the biggest conflict this world has ever seen, ended up coloring the plot of this dark, sardonically written detective novel. It also changed the approach Rutland took in handling the plot.

The official police-investigators, Northshire's Superintendent Cheam and Scotland Yard's Chief Inspector Alan Driver, question all of the potential suspects and discuss the details of the case, but they barely have any tangible clues to work on – only the personalities and actions of the characters involved in the murders. Luckily, Rutland assembled exactly the type of characters of that could carry such a plot.

Blue Murder takes place in a small, sleepy village, called Nether Naughton, where the elderly, lecherous and sadistic Mr. Hardstaffe precedes over the village school as its hated headmaster. Hardstaffe lusts after "the youngest and prettiest of his staff," Miss Charity Fuller, but refuses to return his attention "as long as she is alive."

She is, of course, Mrs. Hardstaffe: a bothersome hypochondriac who keeps "a copy of Medical Hints under the Bible besides her bed" to "simulate new complaints" in the morning, but developing a poor health in the Hardstaffe home seems like a real possibility – especially in light of what their grown daughter's passion.

Leda Hardstaffe is a typical, English countrywoman in tweeds with a kennel of Sealyham terriers, but the little monsters have been allowed to overrun the home and they aren’t house-trained, which gave a whole new meaning to getting carpet bombed.

It doesn't appear to be a place to entertain guests for a long period of time, but they take in Arnold Smith, a scribbler of "novels of weak adventure, sugared with ladylike romance," who wanted to escape wartime atmosphere of London and work on the next chapter of his literary career: a detective novel. The idea came from his literary agent, "only thing is to turn to murder," but Smith, confessedly, knows nothing about writing detective stories and wondered how to "possibly get into the atmosphere of crime?"

Well, in that regard, Nether Naughton proved to be an unexpected well of inspiration for an aspiring mystery writer: Mrs. Hardstaffe is found expired in her bed from an overdose of morphine and evidence that emerged argues against it being an accident or suicide.

The poisoning of Mrs. Hardstaffe mainly functions as a prelude to another, far more violent tragedy at the house, but also introduced a cast of new characters and potential suspects. There's the return of a prodigal son, named Stanton, who left after a fall-out with his father and brought along his wife and infant son, which was good for some friction here and there. Mr. Hardstaffe also found himself on the other end of a "threatening fist" when the father of one of his pupils, a Mr. Ramsbottom, came for an explanation for the unnecessary thrashing he gave his son with a cane, which happened earlier on in the story. Of course, Mr. Hardstaffe is remorseless and afterwards basically call parents "queer creatures" and basically compares them to wild animals with a superiority complex-by-proxy where their child is concerned.

So, as I said previously, there's a lack of physical and tangible clues, such fingerprints and blood-spatters, which were replaced by the psychological nature of the characters and how they acted upon the events they're confronted with – which is a game Rutland played very well and drew attention away from the murderer. Yes. Just like in Knock, Murderer, Knock, I pointed to the wrong person as the murderer.

The final revelation of the murderer was very well done. It was an incredibly dark, grim and gritty ending, but seemed very fitting for the seemingly never-ending darkness the world found itself in at the time.

That's something else I found noteworthy about Blue Murder: the World War II material was very interesting and places the book in the same category as such classical WWII mystery novels as Carter Dickson's Nine-and Death Makes Ten (1940), Christianna Brand's Green for Danger (1944) and Michael Gilbert's The Danger Within (1952).

The story is peppered with references of war-time England, which range from food shortages ("this meal isn't enough to feed a cat on") and a throw-away remark to a inquest on a baby ("left unattended in its gas-helmet during a mock attack") to quips about Hitler and Mussolini ("Blame Hitler. I didn't start the war").

There's also a character you won't often come across in mysteries from this era: a German-Jewish refugee, a scatter-brained maid named Frieda Braun, who's at the receiving end of the Hardstaffes casual anti-Semitism, but her most interesting contribution to the plot were her brief, contrasting memories of Germany – one which was still full of kindness and gemütlichkeit and the other the one she had flee from.

Well, I appear to have rambled on after I had already written the concluding part of this review, because I always seem to fumble the summing up part of a blog-post. So, I'll end it here by saying Blue Murder was an interesting, character-driven mystery novel with a heap of interesting WWII material and a dark, but memorable, ending. However, I still think Bleeding Hooks is the best of Rutland's trio of mystery novels. Blue Murder is good and a close second, but Bleeding Hooks is (IMHO) a genuine masterpiece. But discover Rutland and her altogether small output for yourself, because they are now available again thanks to tag-team work of our fellow "Connoisseur in Murder," Curt Evans, and the great Dean Street Press.
Geplaatst door TomCat on 11/05/2015