"You've been dreaming... bodies are always being found in libraries in books. I've never known a case in real life."
- Colonel Bantry (Agatha Christie's The Body in the Library, 1942)

Comes a Stranger (1938) is the eleventh mystery in E.R. Punshon's Detective-Sergeant Bobby Owen series and belonged to a cluster of incredibly rare titles, which come with a three-or four digit prize-tag attached to them – resulting in a limited circulation among collectors on the secondhand book market. However, the key word here is "belonged."

Dean Street Press is going to reissue yet another batch of Bobby Owen novels, which are scheduled for release early next month. Our very own genre historian, Curt Evans, provided the introductions, but Comes a Stranger also has an interesting after word adding some historical annotations to the plot – as well as mentioning the work of other mystery writers that were inspired by the same event. But this part can't be mentioned without spoiling a vital element of the plot. So I won't. Luckily, there's more than enough material to drone on about between the pages of this book. 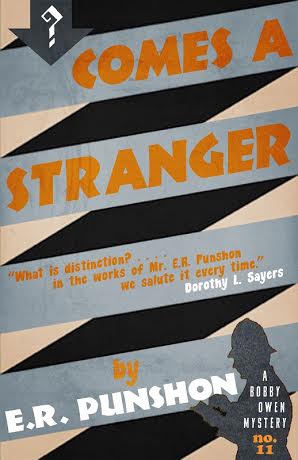 In the book immediately preceding this one, Dictator's Way (1938), Bobby Owen followed in the footsteps of Dorothy L. Sayers' Lord Peter Wimsey and Ngaio Marsh's Inspector Roderick Alleyn by falling in love with one of the suspects: the lovely owner of chic London hat shop named Olive Farrar. Interestingly, Alleyn and Agatha Troy met in Artists in Crime (1938), which was published in the same year as Dictator's Way and Comes a Stronger, but nearly a decade behind Sayers' Strong Poison (1930) – a book that seems to have saved many detectives from the celibate life of Sherlock Holmes, Father Brown and Dr. John Thorndyke.

The engagement between Bobby Owen and Olive Farrar has come to the attention of Miss Kayne, an old acquaintance of the latter, who invited the couple to spend a week at her place in Wynton Village, which is also the home of the world-renowned Kayne Library.

Miss Kayne's late-father had spend years in building up the library and has acquired the illustrious reputation of being "the finest collection of books in private hands." It contains the "whole history of early European printing" and "the birth of European thought," which tell the story of "the growth of the human mind during those years" – making it a modern Library of Alexandria. Under the "careful and somewhat complicated will" of Miss Kayne's father, there's an assurance that the library is kept together. However, this pits the interest of several interested parties against each other.

A crabby, grouchy bibliographical scholar, Mr. Broast, presides over the famous library and loves to act as its owner, but under the will he's only an employee and has to deal with monthly inspections from the co-trustees of the library – Mr. Nathaniel "Nat" Kayne and Sir William Winders.

The former is Miss Kayne's cousin and he would love nothing more than to cash in one the library’s reputation by selling off the books to the University of Wales. The latter is a rival collector who was "part dearest friend and colleague" and "part deadliest enemy and hated and dreaded rival," who would leap at an opportunity to replace Mr. Broast with one of his own man.

Well, it's against this backdrop, in combination with a visit from a real-life Scotland Yard detective, that things begin to happen all of a sudden, which commences with a report that a body has been spotted in the library. I say spotted, because discovered isn't the right word.

There's an American gentleman, Bertram A. Virtue, who saw a blood-covered body of a man through the grated window of the library. However, a thorough examination of the library failed to uncover as much as a single drop of spilled blood, but, strangely enough, the report coincides with the discovery of a murdered man in a sunken lane in the surrounding woods – which was clearly murder going by the bullet holes in the body.

Bobby Owen is allowed to stay on at the village to assist the local authorities and slowly, but surely, begins to unravel the case, which has many interesting, seemingly baffling aspects about it. Why did the description of the apparent non-existent body in the library match a photograph in possession of Mr. Broast's giggling secretary, Miss Perkins? Why did Bobby Owen receive a box filled with forgot-me-nots? Is there a personal motive for the murder or is it tied to printed treasures stored in the library? Does any of this pertain to the "perfect murder" Miss Kayne alluded to in a conversation with Owen? And would it have killed the murderer to take a couple of shooting lessons, before emptying an entire magazine in the second victim? That's just lazy and sloppy work.

Punshon ties the entire bundle of plot-threads together with the skill and grace one expects from a novelist, but also has the air of a researcher/bibliographical scholar as it has many tidbits about the history of the printing press, rare editions and book hunting – which is compared with the work of a detective. It gave the novel a character of its own.

So, in that regard, Comes a Stranger is an absolute must-read for fans of the so-called "bibliomysteries," but let the reader be warned: some scenes towards the end of the book might be considered trigger emotions of heavy dread. It's not what you think. It's much, much worse!

The only smudge on the overall plot (IMHO) was why the first (shooting) victim died and the lack of adequate clueing to that answer, which therefore became a rather cheap, somewhat unfair method to divert attention away from the murderer. There was more than enough in the book to compensate for this slight imperfection, but, as a bit of nitpicker, I was mildly annoyed considering the quality of the overall plot.

Otherwise, I heartily welcome Comes a Stranger back into circulation.

I'll be back soon with a review that, hopefully, wasn't slapped together by a sleep-deprived mind, but, in the meantime, you might want to be enticed by my previous reviews of