"Not a problem... we do this kind of stuff all the time."
- Jonny Quest (The Real Adventures of Jonny Quest)

Robert Arthur was one of those prolific and versatile writers who participated in many different genres, which included detective stories, speculative fiction and radio plays, but I know him primarily from a handful of wonderful short stories such as "The Glass Bridge" and "The 51st Sealed Room" – collected respectively in Mystery and More Mystery (1966) and Tantalizing Locked Room Mysteries (1982). Surprisingly, however, is the fact that Arthur's name has not entirely faded from the memory of the general public.

It's true that the short pieces of fiction Arthur wrote for the popular magazines of the past have fallen into obscurity, but the contributions made to a long-running series of mystery novels for younger readers are still avidly read to this day. Some of those books were even turned into movies during the 2000s. 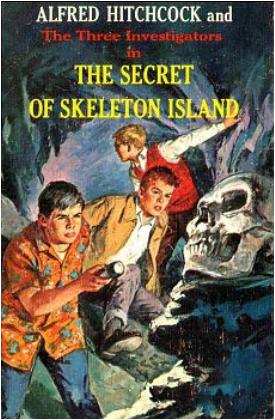 Arthur wrote ten of the forty-three books published about The Three Investigators, which originally appeared under the title Alfred Hitchcock and the Three Investigators. The Secret of Terror Castle (1964) was first entry in the series and the books would continue to appear until the 1990s, but the general opinion seems to favor the early period when Arthur was in charge of the boy detectives.

So, as a fan of Case Closed, I wanted to give The Three Investigators a shot and Mike Grost had mentioned one of the books, The Secret of Skeleton Island (1966), on his extensive website on detective-fiction – which made it very, very easy to pick a title. It was already narrowed down to ten titles, but this basically narrowed it down to one.


The Secret of Skeleton Island has a short introduction, entitled "A Word from Alfred Hitchcock," in which the series and characters are briefly outlined for the benefit of those who missed out on The Three Investigators when they were the "appropriate" age to read them. Hitchcock himself appears in the opening-and closing chapter of the book as sends the trio on a mission and hears who they managed to solve the case.

Well, they are introduced as follow: Jupiter "Jupe" Jones is the First Investigators and described as "the brains of the firm." He's basically the Nero Wolfe to the other two's Archie Goodwin. Peter Crenshaw, the Second Investigator, is a tall, muscular boy who "excels at athletics" and could be seen as the legman of the group. The Third Investigator is Bob Andrews, "the most studious of the three," who's in charge of Records and Research.


In the opening chapter of the book, Hitchcock tells them Bob's father is working as a movie technician on a suspense picture called Chase Me Faster, but the final location of the shoot is plagued by a series of thefts and vandalism – as well as a possible haunting.

The location is a small island in the Atlantic Bay, down on the Southeast coast of the United States, where the movie company is rebuilding an old, abandoned amusement park for the final scene of the movie.

Skeleton Island is the name of the place and has a long, haunted history that stretched back before its discovery in 1565 by an English captain, which is backed up by the bones that are still uncovered in its sands and the occasional gold doubloon washing up on the beach. The Spanish doubloons are a remnant of a lost treasure, scattered over the ocean floor by a notorious buccaneer, named Captain One-Ear, in 1717 when "British troops had made a surprise attack on his quarters" on the island and was cornered in his longboat. However, there's a good explanation, accompanied by a splendid clue, as to what really happened to the golden doubloons. Granted, the doubloons are only a small plot-point and somewhat of a side-distraction, but I enjoyed this part and the clue was wonderful.

Anyhow, Jupe, Peter and Bob were supposed to discreetly enquire about the thefts as undercover agents of the movie company, because who would suspect a bunch of kids of being meddlesome detectives? Well, apparently, just about everybody. The man who picks them up from the air-port, a Mr. Robinson, mockingly identifies them as "the three kid detectives from Hollywood" and "accidentally" strands them on a small island during a thunderstorm.

It's during this night they see the phantom of the abandoned amusement park riding one of the old, worn horses of the merry-go-round. According to the local legend, it's the ghost of a lovely, but headstrong, woman who was riding the same merry-go-round twenty-five years previously when a sudden storm had blown up, but she wanted to finish her ride and was struck by lightening – and her ghost has been seen riding the merry-go-round ever since.

However, more importantly, is that they meet Christos "Chris" Markos that very same night. A young boy from Greece who sails around the island in his small boat, searching for treasure, in order to help his father – a sponge diver who fell ill. Locals aren't very fond of Chris, suspecting him of being the thief, and the only one who really seems to believe him are Jupe, Peter and Bob.

They'll be sharing some very, very tight spots over the course of this mystery/adventure story, both above and beneath the surface, before they can bring the case to a satisfying close and report back to Alfred Hitchcock. The overall plot was much better than I expected from a juvenile mystery novel and could be compared with Scooby-Doo or the 90s version of Jonny Quest, if they had better plots or were written as straight adventure/detective stories. I mean, I figured out the solution, but never expected this kind of pure misdirection (simplified as it was) in a book targeted at children.

I also think we owe a debt of gratitude to Robert Arthur for the survival of the classically-styled detective story after the 1960s, because I think these book indoctrinated quite a few kids into seeking out more mysteries. Wait... did I say indoctrination? What I meant to say was brainwashing. No. Wait! Hold on for a moment. Not brainwashing. Remember, English isn't my first language. I sometimes confuse certain words. The word I'm looking for is... uh... conditioning? Why is the ghost of Fredric Wertham screaming at me that I just proved him right?

Anyhow, I enjoyed The Secret of Skeleton Island and I wish I could feel nostalgic about it as well for the complete experience, but it was only my first encounter with The Three Investigators. However, it probably won't be the last.

Finally, allow me to refer you to the review I posted yesterday of Craig Rice's zany The Big Midget Murders (1942) and I'll probably be back with another review before long.
Geplaatst door TomCat on 11/11/2015