A Tiny Bit of Trouble

A brief glance at the blog-posts that have accumulated under a specific "toe-tag," labeled Craig Rice, learns that the last review of her screwball series featuring the trio of John J. Malone, Jake Justus and Helene Brand date back to the early parts of 2011 – which can be construed as criminal negligence. Luckily, I found myself in the mood for something zany and The Big Midget Murders (1942) was just within reach. So let's jump right into it. 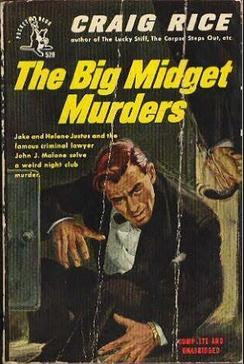 In a previous outing, namely Trial by Fury (1941), Jake Justus had won a casino from a Chicago millionaires in a wager "that she could commit a murder without being caught at it" and emphatically lost.

As a result, Jake became the proud owner of a casino and restructured the place into a cross between a nightclub and a theatre, which he financed with a loan from Max Hook – a semi-regular character in the series. However, owning money to "a gambling czar" with a body count to his name proved to be the least of Jake's problems.

The main course of entertainment comes from the act of Jay Otto, "the biggest little midget in the world," who's as talented as they come, but with a hate-filled, spiteful personality that reportedly drove his former secretary from a New York hotel window. So is it any wonder Jake calls in the help of his friend and Chicago's famous criminal lawyer, John J. Malone, to help him "fight out" of a "tricky clause in his contract." But it never comes to that.

They find Jay Otto in his dressing room, his "face blackened and discolored," hanging inside his closet from a noose made out of silk stockings. It's murder with a capital lowercase m!

So, they do what every sane person would do in such a situation: stuff the body in a bull-fiddle case and attempt to cover it up! There is, however, one snag in their plan: they turn out to be characters in a Craig Rice novel and therefore nothing will go smoothly or according to the plan – which explains the large amount of alcohol consumption by the characters. It can be a tiresome universe to life in. 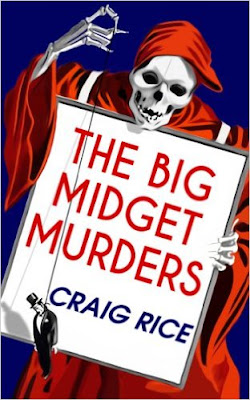 First of all, the bull-fiddle case with the body inside is taken from the casino and turns up again on the doorstep of Justus and Helene, but this time it's empty. The problem is that the key to the fiddle case was in Justus' pocket, which resulted in The Big Midget Murders being marked as a (semi) impossible crime story and was even listed by Robert Adey in Locked Room Murders and Other Impossible Crimes (1991). However, the explanation to the body being taken from the locked case makes this explicitly not a locked room-type of mystery and shouldn't be read as such or else you might end up severely disappointed – which also has to with only being a minor point in the overall plot.

Anyhow, the body of Jay Otto turns up in his own bed, redressed in silk pajamas, which puts Malone, Jake and Helene in the troublesome position of simultaneously having to figure out what just happened and keeping police attention away from the casino. Which is easier said than done.

This alcohol-fueled, merry-go-round involves a faded diva, named Ruth Rawlson, who accidentally drank from a doped bottle of whiskey in Otto's dressing room and knew of his death way before anyone else. There is Otto's assistant, Allswell McJackson, a kind giant of six-foot-six who has a chemistry degree, but had to settle for his current position because nobody wanted to hire a college professor who "looks like a wrestling champion" and became an immediate suspect after the second (official) discovery of the body. A search for a leather-covered strongbox gets Justus bumped on the head, but that's par of the course for a series closely linked to the hardboiled genre and Helene discovers a second body hanging from a pair of silk stockings – which leads to a dangerous encounter with one of Max Hook's rogue gunman and a descend into a dark cellar.

All of this somehow ties together with some of choirgirls at the casino and a classic money scheme that involved the dead midget, but Malone figures it all out during a Tommy Cooper-esque magic performance at the casino. A bit I very much enjoyed, but, as I've said before, I love bits of magic and illusions in my detective stories. Even if it doesn't involved an impossible crime plot. It's just fun to read.

The only drawback of the revelation is that the central clue hangs upon a minor observation, which helped in hiding the murderer from the reader, but should take nothing away from this drunken ride and its smooth, almost perfect arrival at it's logical conclusion. You might argue that The Big Midget Murders is a rather average fare for Rice, but, you have to remember, that not all classic mystery writers were Craig Rice and her punch-drunk style of plotting-and writing were practically unique in the genre.

So every book in this series has been, thus far, somewhat of an experience that I can definitely recommend, especially if you want something out of the ordinary, because Craig Rice knew how to avoid the ordinary.

If you're completely new to Rice, I would recommend to start with her classic and charming standalone novel, Home Sweet Homicide (1944), which won't fail to make you fall in love with her work.
Geplaatst door TomCat on 11/10/2015