After my previous review of Max Allan Collins' The Lusitania Murders (2002), I was dithering about what to read next: sample another one of Robert Arthur's contributions to The Three Investigators, pick up a holiday-themed mystery novel or return to the pile of unread E.R. Punshon mysteries? So, of course, I ended up picking something completely different.

Schemers (2009) numbers thirty-sixth in Bill Pronzini's ongoing series about the "Nameless Detective," which can be categorized as a "bibliomystery" with two seemingly impossible situations at the core of plot – both of them perpetrated in a private-library housing one of the finest collections of detective stories imaginable! 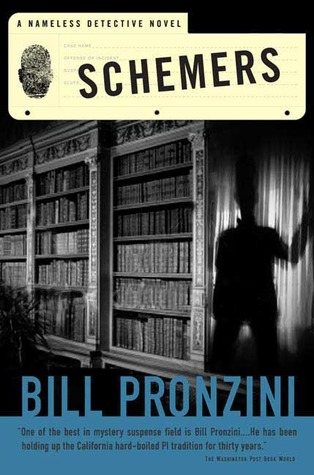 Crossing the threshold of Pollexfen's library is described as something akin to entering Aladdin's Cave: an interior light glints off the Mylar protectors wrapped around the bright, colorful spines and gives the impression of being hemmed in by mountains of precious stones. I think it's safe to say that most mystery aficionados would consider such a library to be a collection of gems. The place holds "upwards to fifteen thousand volumes" of detective fiction from the late nineteenth century and early 1900s, but also has "a fair representation of post-1950 authors and titles" – many of them signed and inscribed. It's some of those rarities that have gone missing.

The missing items from the collection are Raymond Chandler's The Big Sleep (1939), Rex Stout's Fer-de-Lance (1934), James M. Cain's The Postman Always Rings Twice (1934),  Ellery Queen's The Roman Hat Mystery (1929) and Dashiell Hammett's Red Harvest (1929) and The Maltese Falcon (1930). Some of them are, what are known as, associating copies, which are books inscribed to fellow writers or famous people. Giving them considerable more value. There are, however, some anomalies making this everything but a routine case of theft or fraud, which is why the insurance company asked "Nameless" to investigate the claim.

First of all, nobody except Pollexfen had free, unlimited access to the library: the only key to the room was in his possession and there are double locks on all the (barred) windows and the door. Secondly, Pollexfen lacked the motivation to swindle his insurance company and obsessed over his collection like Captain Ahab, which comes on top of the obvious lack of traces of a burglary – which are a must if you want to swindle an insurance company. But there are more suspects in the home that houses "one big unhappy family."

Pollexfen has a wife, Angeline, and brother-in-law, Jeremy Cullrane, who are "money-grubbing alcoholics" and they would love to have gotten their greedy hands on half-a-million worth of books, but lacked opportunity and missed the knowledge to pick assemble a list of the most valuable titles. It is, however, determined by "Nameless" that a duplicate key could've been made, but that’s not how the books were spirited from the library. That answer turned a new page on a classic trick. 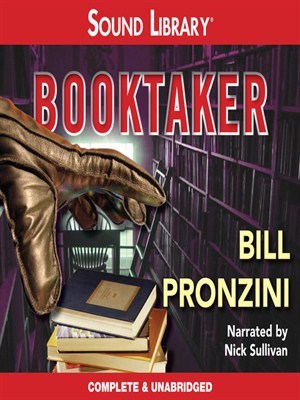 The second impossibility concerns "a sick new way of killing somebody" within the confines of a locked room and happens when two of the people mentioned above are found in the library: one of them unconscious and the other with his head blown-off by a shotgun blast. It's not difficult to figure out who's responsible for the murder, but the mystery lies in how it was done and the explanation requires an answer to the Chestertonian question of "how can a homicide not be a homicide" – and that answer is completely fair, plausible and original. I would also label it extremely risky and somewhat crazy, but I guess those are prerequisites for planning and committing a murder.

I want to point out here that Schemers isn't the only bibliomystery in this hardboiled series: "The Pulp Connection" and "Booktaker," collected in Casefile (1983), which feature respectively a murdered pulp collector in his locked library and books and maps being stolen from a tightly secured store.

Interestingly, one of Pronzini's colleagues-in-crime, Lawrence Block, has two similar type of detective/rogue stories to his name that happened to feature some of the books that figured in Schemers. In "The Burglar Who Smelled Smoke," collected in both The Mammoth Book of Locked Room Mysteries and Impossible Crimes (2000) and The Black Lizard Big Book of Locked-Room Mysteries (2014), a book collector is murdered in his locked and private library and a first edition of Stout's Fer-de-Lance figures in the plot – which was inscribed to President Franklin D. Roosevelt. The Burglar in the Library (1997) revolves around a rumored associating copy of The Big Sleep by Chandler, which according to legend has a written dedication to Dashiell Hammett. They're excellent and come recommended, if you like these types of mysteries.

Well, I was planning to end my review here, but I really just noticed I had completely ignored the second plot-thread from Schemers. No joke. I was too distracted by my personal obsession over locked room mysteries.

Schemers is one of the more recent novels and Nameless has shed his lone-wolf persona from the earlier books, which lead him to become more of a family man and began to share his workload – namely with Tamara Corbin and Jack Runyon. Runyon is the lone wolf of this new pack and he has been doing his best to crawl out of "his own personal hell."

The case Runyon has been assigned to is to find the titular schemer, who has been harassing members of the Henderson family, two adult brother in particular, and the book opened with this figure desecrating the grave of their father. This person poured acid over the urn and headstone. Spits several times on the grave and leaves a threatening message that things have only just begun. A promise that is being kept when one of the brothers is assaulted in his garage with a tire-iron and it quickly becomes clear to Runyon the actions of this person is rapidly escalating, which may end with him pouring acid on a living person.

This plot-thread is meant to add some tension to compliment to the more cerebral investigation Nameless is conducting, but the why-dun-it aspect of the case was genuinely interesting – even to a classicist like yours truly. After a while, you simply want to know where all that pure, unadulterated hate oozed from. The only part I found annoying was Tamara's contribution to both cases, which consists of walking around with "a big cat-ate-the-canary smile" and talks insistently how a certain Lucas Zeller gave her sex-life a much needed protein injection with his meat needle. She also looks up some stuff on the internet for the guys, but I found her mostly annoying in this outing.

Fortunately, that only covers a tiny portion of the book and the majority covers the chapters detailing a couple of well written, intricately plotted stories populated with believable, rounded characters. Basically, everything one has come to expect from one of the grandmasters of the genre.
Geplaatst door TomCat on 11/24/2015