My previous reviews took a closer look at two of Roger Ormerod's detective novels, One Deathless Hour (1981) and When the Old Man Died (1991), which were published a decade apart and represented two distinctly different periods in his writing career – respectively his private eye and neo-traditional periods. Only thing that both novels have in common is Ormerod's creative and often original bend of mind when it comes to plot-construction. So I decided to go for the hat-trick and pick another one of his nineties mystery novels, but don't worry. I'll return to the Golden Age in my post. 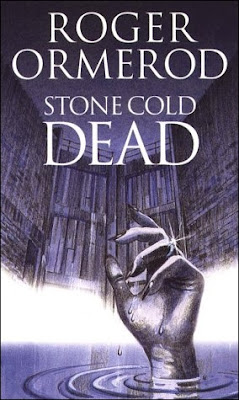 Stone Cold Dead (1995) is listed online as the final entry in the Richard and Amelia Patton series, but The Night She Died (1997) is the title that closes out the series. This is almost a pity as Stone Cold Dead is Ormerod's most traditionally-styled mystery from this period with a surprisingly uncomplicated plot.

There are no shattered clocks, fabricated alibis, apparent impossibilities or messing around with cars and target pistols. Just a deceivingly simple murder in a small, tightly-knit community "firmly and delightfully living in the past" in a (socially) isolated location. A place that resisted and shown the modern world the door for two centuries.

Stone Cold Dead begins with the Pattons traveling to Flight House to visit Amelia's goddaughter, Amelia "Mellie" Ruby Fulton, who's celebrating both her eighteenth birthday and her engagement to a young police constable, Raymond "Ray" Torrance – who spend £800 pounds on an engagement ring. Mellie is the daughter of Amelia's old school friend, Ruby Fulton, who's married to an old-fashioned, old-world country lawyer, Gerald Fulton. But his household situation is a little out of the ordinary. Gerald Fulton pays his son, Colin Fulton, a nominal rent to live there. Flight House looks down on a canal basin with locks, pounds and an old toll booth with people living "all the year round in their houseboats" on the canals. So there has to be a permanent lock-keeper, Colin, who was preceded by his uncle and grandfather.

The canal is privately owned by "three old dears," Adolphus, Alexandra and Victoria, who buried themselves even deeper into the past than the people populating their farms, villages and canals. Nowadays, Flight House is presented rent free to the lock-keeper with no salary, but the tradition is to tip the lock-keeper for helping the boats through. So they lived and worked in "an environment established over 200 years before" with "the physical isolation" cutting "them off from the present pace of life." There's "no radio, no TV set, no CD player" at Flight House, which are deemed to modern, but the outside world sometimes seeps into this isolated community. And having values, modern or old-fashioned, doesn't automatically mean you always live up to them. Something the Pattons begin to find out before they even arrived at the house.

Richard and Amalia drive to Flight House during snowy weather and come across an abandoned, unlocked car with the engine still warm and the keys hanging from the ignition lock – fuel gauge indicated half a tankful. What happened to the driver? A question that will be answered later that night. 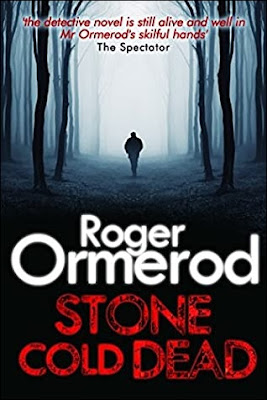 They receive a warm welcome when they arrive, but there are some undercurrents during the birthday/engagement party. Gerald is not exactly charmed by his future son-in-law as "the young foul" thinks it's humorous to take constant digs at Gerald with his "really very immature authority." Ray comes to the party in his uniform and a joke ready ("is this bar licensed, may I ask?"), but Richard notices he has been "drinking as one who sought oblivion." And he refused to show Mellie the ring. So the stage is set.

Later that evening, while taking a stroll around the promise to smoke his pipe, Richard sees a human hand sticking out of the water of the pound. However, I can't reveal anything about the victim, because the victim's identity is a genuine "Ooh, the plot thickens" moment. A very well done effect considering the victim is somewhat of an outsider who has not been mentioned, or named, until the body was discovered. Ormerod tried to repeat this trick when Richard finds someone in very poor condition on one of the houseboats along the canal, but not quite to the same effect as the murder. Although it definitely thickened the plot even further and it made me look in a completely different direction for an answer.

So, while the case appears to be relatively simple and straightforward on the surface, the local policeman in charge, Inspector Ted Slater, had "nothing of a routine nature that he could pursue" with means and opportunity being the same very everyone involved – numerous motives were "jealously guarded." Richard Patton is more than a little guilty of guarding all the motives and keeping evidence from the local authorities. This is both a strength and a weakness of the plot. As noted above, Stone Cold Dead has a very simple, uncomplicated crime without the problems of broken windows, smashed clocks, faked alibis, impossible crimes and toying around with firearms. So there's less physical evidence and clues to betray the murderer or obscure the trail, which is probably why Ormerod didn't dare to go all-in with the puzzle surrounding the missing murder weapon. A very clever idea that could have been on par with the brilliant, double-edged central clue from The Key to the Case (1992) had been properly clued. Now you can only make an educated guess, if you can spot the murderer, that is.

Technically, the plot is sound enough and Ormerod told a fascinating story with a very well realized setting, memorable set-pieces and some good pieces of reasoning, but, purely as fair play mystery, Stone Cold Dead lagged behind his other novels from the same period. The Key to the Case, A Shot at Nothing (1993) and even And Hope to Die (1995) are shimmering examples of what could have been had the Golden Age never ended in the 1960s and continued to develop. Stone Cold Dead started out as something resembling a throwback to the old-fashioned, traditional detective story, but rapidly began to change into a more character-driven, modern crime novel. And not a bad crime novel at all. But hoped to find another one of his sublimely plotted, neo-Golden Age mysteries in Stone Cold Dead. So only recommended to readers who are already a fan of Ormerod and the series.

A note for the curious: there's a very small, unsolved slice-of-life mystery in Stone Cold Dead. During the second-half of the story, the police begin to drag the locks in the hope of finding the elusive murder weapon. The locks had not been pumped dry in one, or two, centuries and the police collected "piles of sundry junk," which included everything from pram wheels to "a complete chandelier." There were also two shopping trolleys. Patton wonders how they got there, because "no canal user would load a trolley on to his boat" as it would be a devil of a nuisance and no shopper too idle to return the trolley to the store "would have walked it at least two miles to reach these locks." I know this is not as big of a mystery as who killed the chauffeur in Raymond Chandler's The Big Sleep (1939), but I'm Dutch. And this little waterway mystery fascinates me. My solution is that some holidaymakers or canal boat residents went to the village to stock up on supplies, but their car broke down on the way back. So they fetched two trolleys to get their supplies to the boat and then dumped the trolleys into the lock.