"This is no ordinary murder! This is an impossible crime!"
- Edogawa Rampo

The late Roger Ormerod, who hailed from Wolverhampton, Staffordshire, England, worked a wide variety of jobs during his lifetime, such as postman, factory worker, country court officer and an executive officer in the Department of Social Security, but also moonlighted as a novelist with more than twenty crime-and detective novels under his belt – published over a quarter of a century between 1974 and 1999.

Honestly, I probably would've remained completely ignorant of Ormerod had it not been for the inclusion of three of his books in Robert Adey's invaluable Locked Room Murders (1991). And the descriptions of the impossibilities were original enough to attract my attention. One of these books in particular held my interest. 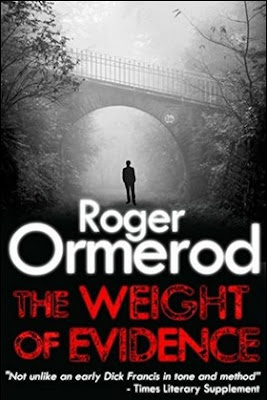 The Weight in Evidence (1978) appears to have brought two of Ormerod series-characters, David Mallin and George Coe, together in a partnership as private-investigators. Mallin seems to have been his main series-characters, debuting in Time to Kill (1974), while Coe only appeared sporadically in such books as A Spoonful of Luger (1975) and A Glimpse of Death (1976) – with the former being one of the three impossible crime novels listed by Adey. They seem to have crossed paths for the first time in Too Late for the Funeral (1977), when they approached the same case from opposite ends, each unaware of the other's interest, which ended with them becoming partners in crime.

However, the crossover aspect of the past entries in this series was not the primary reason for picking this particular title. Oh no. My reason was much more banal: Adey listed not one, but two, impossible situations for The Weight of Evidence. So, just like a kid in a candy store, I pounced on the bag of sweets which looked to me to be the fullest.

The Weight of Evidence tells of the first investigation of Mallin and Coe as official partners, which brings them to a fence-enclosed site "in the middle of an area obviously being systematically torn down" by a horde of construction workers. But one of the hard hats has gone missing under inexplicable circumstances.

On the previous day, they had erected a site-foreman's shed on the terrain by pouring an eleven by nine slab of concrete on the ground and lowering a floorless shed by crane on this foundation, which was then bolted down on the inside by one of the construction workers, Fred Wallach – who was not a popular member of the crew. So when the crane operator, Walter Dyke, noticed Wallach, who was giving directions in the center of the concrete patch, appeared to be unaware that the shed was coming down the wrong way round he kept his lips sealed. Because a chain-link fence now blocked the door and this trapped Wallach inside the shed.

Next thing they know, "the five o'clock hooter" went and they "packed it in," which left Wallach to spend "a cheerful night" trapped inside a bare shed. However, when they returned to the shed it appears to be inexplicably deserted and when the two private-investigators take a look inside they discover the nuts have been bolted down and tightened, which left Wallach with absolutely no room to escape. The chain-link face blocking the door was undisturbed and taking out the window proved to be an unlikely explanation.

So how could anyone vanish, like a burst soap-bubble, from a shed with its only exit blocked by a solid, undamaged chain-link fence? It's "a classical locked-room situation." 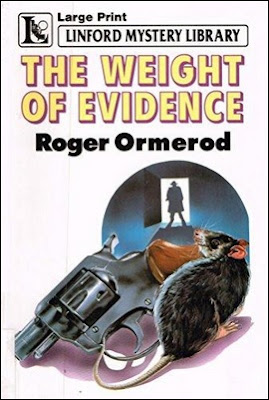 The trick for the impossible disappearance is pretty nifty and logical, splendidly using the bolted down, tightened nuts as red herrings, which did not prevent me from figuring out how Wallach escaped from the blocked shed. However, this was not due to my dazzling abilities as a brilliant armchair reasoner, but because certain elements of the setting and problem reminded me of another locked room novel. I would probably spoil too much by naming the book in question, because the method for the vanishing trick here hinges on exactly the same idea used in the other book to present a murder in a small, completely sealed environment – getting a different result with pretty much the same trick. And Ormerod looks to have been the originator of this locked room idea.

Anyway, the impossible disappearance is resolved by the end of the second chapter, but there's a legitimate and very clever reason offered for this early revelation of, what should've been, one of the focal points of the plot.

The solution to the first impossibility leads them to a long-forgotten room on the demolition site, bolted from the inside, which contains two bodies: one of them is the missing construction worker, shot through the heart, but the second body has been rotting away in that room for the past thirteen or fourteen years. As it turns out, the decayed skeleton belonged to Marty Coleman, a local, who disappeared after taking part in a bank robbery with the loot. A "bag of white fivers" that could not be spent. A second accomplish, Dutch Marks, got away empty handed and the third one, Karl Lubin, served time for shooting the bank manager. Now he lives in the neighborhood again!

So that makes for a nice, double-layered locked room problem, but the bolted door is not even the biggest obstacle facing Mallin, Coe and the police. Coleman and Wallach were shot with the same gun, thirteen years apart, but the missing hand of Coleman suggested the murder weapon had been wrenched from his grasp. But can a gun, "rusted to hell," fire a second, fatal shot after nearly fifteen years? What role does the bank robbery and bag of banknotes play in the case? Are any of the old robbers involved or did Wallach's murderer accidentally stumble across this nifty hiding place?

Admittedly, the whodunit angle is the weakest facet of the plot, because Ormerod gave the murderer's identity away when the robbery angle turned up. Mallin made a throwaway remark that contained the whole truth and could have flown under the radar had Ormerod handled this so-called clue with a bit more subtlety and sophistication.

Regardless of this blunt handling of the killer's identity, the main attraction of the plot remains the locked rooms and the way in which they were interconnected. One simply could not exist without the other and the only other example I could think of with such a pair of linked impossibilities is John Dickson Carr's The Hollow Man (1935). 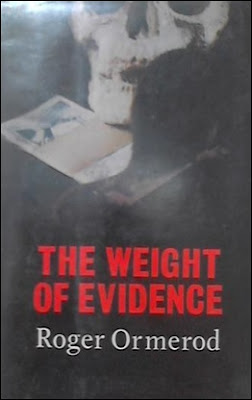 Of course, The Weight of Evidence is not in the same league as that landmark impossible crime novel by the master himself, but the ambition was definitely there and the locked rooms were good, and original, enough for Adey to label the book as "the genuine article." Even though he was taken somewhat aback by the complexity of how both locked room tricks were stringed together. I fully admit the story would have benefited from some maps or diagrams, but the tricks are not impossible to imagine. You just have to read the explanations very carefully.

So, no, it would be unfair to compare The Weight of Evidence to some of the classics of the genre, but I think a comparison with the trio of locked room novels Bill Pronzini wrote during the 1980s is allowable.

I know Pronzini is an American and Ormerod was English, but everything about this book, such as the tone, atmosphere and plot, felt not entirely dissimilar to Hoodwink (1981), Scattershot (1982) and Bones (1985). Particularly the last one felt similar in mood to this one as well as dealing with skeletal remains and an impossible crime. So you should expect something along the lines of a 1980s Nameless Detective novel when picking this one up.

As you can probably judge by this review, you have not heard the last of Ormerod on this blog and I'll not limit myself to his handful of locked room novels. Some of his "normal" detective stories also piqued my interest and found some of the negative commentary on his work by the critics very encouraging, which stated that his labyrinthine plots tend to have too many twists and turns. Ha! There's no such thing as too many twists and turns in a traditionally (styled) detective story.

So expect a quick return to this writer, but the next blog-post might be taking a look at a Dutch mystery novel with, what might be, a very unusual locked room problem.
Geplaatst door TomCat on 5/25/2017