"The final touch. The brush-stroke of the master. I repeat, sir: this must be suicide. And yet—well, if it is, I mean to retire to Bedlam."
- Dr. Gideon Fell (John Dickson Carr's The Case of the Constant Suicides, 1941)

Last week, I was notified about the existence of a small, independent publishing house in my own backyard, called E-Pulp Publishers, which turns its back on the kind of realism propagated by the psychological school of crime-fiction that offers the reader no escape from the drudgery of everyday life – leaving precious little room for imagination. I could hardly believe my own eyes as I read their mission statement.

My country has not always provided the most fertile soil for the type of imaginative, plot-driven detective stories that thrive, or thrived, in England, America, France and large swaths of Asia. Sure, there were some exceptions, mostly notably A.C. Baantjer and Robert van Gulik, but they were often dismissed by "serious critics" as wholesalers of lectuur (pop-fiction). So a dissident voice is more than welcome and would love to finally add some Dutch detective stories to my never diminishing to-be-read pile. And their modest catalog already boosts some potentially interesting titles. 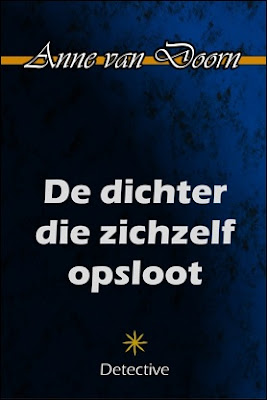 They're reissuing the early police novels by the massively underrated M.P.O. Books and the presumably Dutch equivalent of S.S. van Dine and Ellery Queen, who goes by the name of Eugenius Quak, is scheduled to debut in September with Gruwlijk in het huwelijk (Marriage is Gruesome, 2017) – which appears to be a tongue-in-cheek take on the arrogant detectives of yore. Anne van Doorn is the third name in the catalog and she's listed with several forthcoming titles, but one of her short pieces is offered as a free sample. A short story with a title and synopsis that immediately caught my attention. You probably won't be surprise if I tell you the story is a good, old-fashioned impossible crime story.

Van Doorn's "De dichter die zichzelf opsloot" ("The Poet Who Locked Himself In"), collected in the upcoming De geliefde die in het veen verdween en andere mysteries (The Lover Who Disappeared in the Bog and Other Mysteries, 2017), can be read as an introductory story to her series-characters, Robbie Corbijn and Lowina de Jong.

Corbijn and De Jong are particuliere onderzoekers (private investigators) specialized in reopening cases the police were unable to bring to a satisfying close, which range from tracking down missing persons to shining a fresh light on unsolved murder cases. Corbijn is the brains of Recherchebureau Corbijn – Research & Discover and De Jong, who has been working as his assistant for only three months, plays the Dr. Watson to her employer's Sherlock Holmes as she lends her voice to the narrative.

At the opening of the story, De Jong finds Corbijn down in the doldrums with twelve open files on their desks and getting nowhere on any of them. So the arrival of a new case is a welcome distraction. Particularly one that looks like a simple and routine affair.
Cornelis Meijer wants to hire them to look into the death of his father, Albert Meijer, who was an obscure poet and a bad-tempered recluse. A hermit who preferred "slaving over a line of poetry" in absolute solitude. So he had erected a log cabin in the woods to escape from the bubbling social life of his wife and withdrew there to work in peace, which is where his decomposing body was eventually found and all of the evidence favored a verdict of suicide – traces of gunshot residue were found on the poet's hands and a double-barreled shotgun lay next to the body. A postcard and a negative bank statement provided the police with a motive for suicide, but what settles the matter is that the door was securely latched from the inside and the only window could not be opened. Murder was an absolute impossibility.

However, Cornelis is convinced his rich stepmother had a hand in the death of his father. At the time of Albert's death, she was on an extended holiday in the French Riviera, but the police refused to look on whether she might have hired someone or maybe that she sneaked back home to kill his father. Initially, Corbijn thinks his client might be able to accept his father killed himself, but when visiting the log cabin he concludes that he has a murder of the seemingly impossible variety on his hands.

The reconstruction of a suicide into a homicide is the primary focus of this short story and therefore a howdunit, which was pleasantly clued with both physical clues and important information hidden in the statements of the various characters. You can pretty much make out how the murderer was able to disguise his murder as a suicide in a sealed log cabin. So I was very pleased with that. The identity of the murderer is of secondary importance and turns out to be proverbial unknown quantity, but even that was, sort of, hinted at with Albert's reason for having a shotgun and the white feathers Corbijn found around the cabin. However, I would purely read this story as a locked room mystery/howdunit.

Oh, and the locked room method is an elaborate one and largely original, because I know of two impossible crime stories with an explanation working from the same idea. But this one took that idea to its logical conclusion.

So my interest in the work of Van Doorn has been aroused and will come back to her work when the first full-length Corbijn and De Jong novel, De ouders keerden niet terug (The Parents Didn't Return, 2017), is released.

Stop! This is not the end of this review! You see, I happened to have another Dutch short story on my pile that's a locked room mystery.

Hans van der Kallen is better known in my country under his pseudonym, "Havank," who was one of the popular mystery writers of the first half of the previous century and remembered for his iconic creation – a French police-detective named Charles C.M. Carlier a.k.a. De Schaduw (The Shadow). A figure with an equally iconic illustration by the late Dick Bruna (see book-cover below). You should know that Bruna's illustration as famous to (genre) readers in my country as The Saint logo in the rest of the world.

I always wanted to read something by Havank, but never made the jump because he stories struck me as stories about a detective rather than detective stories. So I always gave him a pass in favor of proper mysteries. However, I have a couple of titles by him on the pile and one is a short story collection, which I bought on the promise of one story. A short short entitled "De vergrendelde kamer" ("The Bolted Room"). So I thought this was as good an excuse as any to finally check that story and actually was an honest to god locked room story. One that comes with an interesting footnote. 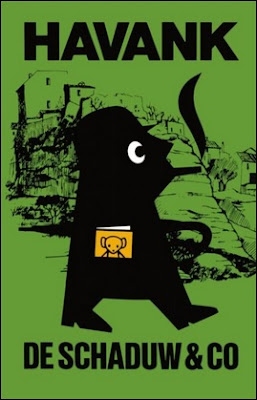 The short short comes from the collection De Schaduw & Co (The Shadow & Co, 1957) and only counts a handful of pages, but the plot was really nice for something as short as all that.

Inspector Carlier, or "De Schaduw," is called to an unnamed company where a gunshot was heard behind the locked door of the director's private office. The man remained unresponsive and when the police arrives they break down the door. What they find is dead man slumped over his desk, a bullet hole in the right temple, and the gun was found in the trashcan near his right hand. The door and an interlocking door had been locked from the inside, while the closed windows looked out from the sixth floor on a busy boulevard. A murderer could not have escaped from the room after the shot was heard. And, no, the solution is not what you think. The shot that was heard was the one that killed the director.

The solution is a proper locked room trick and variations of it have often been employed, but this particular spin was fairly original. I've seen this particular variation only once before and the story, technically, predates this one, but was not published until the early 1990s. So that makes Havank first, I guess.

All in all, a fun little locked room yarn of barely six pages and will read the entire collection one of these days. Havank may actually been closer to his Golden Age contemporaries than I assumed. And that's why one lifetime simply is not enough. You can barely hit a dent in the library of crime-fiction published in the previous century alone! Hindus better be right about reincarnation, because I'm already behind on schedule.

Well, this review is already bloated beyond what's justifiable for two short stories and my next blog-post will be that of regular (i.e. non-impossible crime) Golden Age mystery.
Geplaatst door TomCat on 5/13/2017