"All things are poison, for there is nothing without poisonous qualities. It is only the dose which makes a thing poison."

C.E. Vulliamy was a Welsh author, biographer, historian and an archaeologist who dedicated two distinct periods in his writing career to the detective story. During the first period, covering a brief span between 1932 and 1934, Vulliamy produced four detective novels, published as by "Anthony Rolls," while using his own name decades later for six additional crime novels – which began with Don Among the Dead Men (1952) and ended with Floral Tribute (1963). Until recently, these books have been languishing in absolute obscurity. 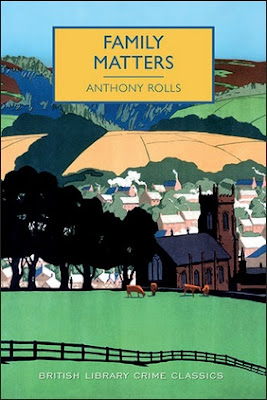 Only a few weeks ago, the British Library Crime Classics reissued two of Vulliamy's earlier detective novels, Family Matters (1933) and Scarweather (1934), of which the former was recommended to me by both Curt Evans and John Norris.

Last year, I reviewed Richard Hull's The Murder of My Aunt (1934) and wondered whether the book was the first example of the "Amateur Murderer" story, but Norris mentioned several examples in the comment-section. Family Matters was one of them and Evans posted a brief comment stating that it was a good detective story. So I pounced on this reprint edition to see if it measured up to other inverted mysteries of its kind, such as Leo Bruce's Case for Sergeant Beef (1947), which actually came within inches of attaining the status of genre-classic, but robbed itself of that position with a lazily pretentious ending. But more on that later. First of all, lets take a gander at what made the book come within spitting distance of classical status.

Family Matters takes place in a small place called Shufflecester, "one of the most English of English towns," where Robert Arthur Kewdingham resides with his family in "one of the less fashionable quarters" of the town.

Kewdingham had been an engineer for twenty-one years, but the post-war slump forced his employer to release two-hundred members of the company's engineering staff. As a consequence, Kewdingham became unemployed and this placed his household on a small, tight budget, however, this financial constraint failed to keep him pursuing a number of hobbies and interests – such as collecting "an astounding medley of junk," studying the occult and politics. These hobbies appear to be harmless enough until you realize the collection of junk takes up a lot of space in the small home. The politics involve an unpopular movement, called the Rule Britannia League, and the mysticism has to do with dreams about his past life as the High-Priest of Atlantis. A subject he loves to wax lyrically about.

Needless to say, Kewdingham could be a difficult person to be around and particularly his long-suffering wife, Bertha, has become the primary victim of this "fool's marriage." She has slipped into an isolated existence within her own home. The relationship with her husband resembles a Cold War-era détente with occasional flareups, while their only son, Michael, is away to school, which leaves her alone with her husband and father-in-law – who occupies an upstairs room and is very hostile towards her. Understandably, Bertha seizes every opportunity to socialize with people from outside the household, such as her husband's cousin, John Harrigal, which is not something her husband really approves of.

So, slowly but surely, the story reaches the point where the removal of Kewdingham becomes desirable to Bertha and she turns to a poison known as lead acelate. She administrated "a very considerable amount of heavy metal," but, miraculously, her husband showed no ill-effects from the large quantity of poisonous lead in his food. What's even more astonishing is that his health began to improve after she began to poison him!

Someone who's equally baffled by Kewdingham's improved health is the local doctor, Wilson Bagge, who has been secretly using his patient as a guinea pig. 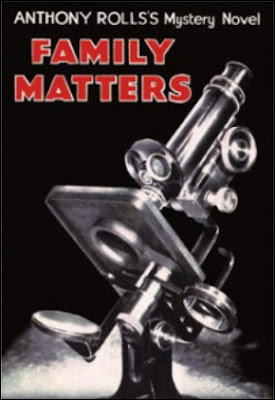 Kewdingham was also described as "a wretched hypochondriac," a self-professed "disciple of Paracelsus," with hundreds of bottles, tubes and jars of medicine and patent remedies in his bathroom cupboard – which made him the perfect test subject. Dr. Bagge had been studying the medical use of aluminum and he had succeeded in producing an alum compound, but needed to test "the effect of this compound on the human organism." So he picked the person who had no problem in taking an unknown substance presented as a medicine. However, the lead acelate and alum chlorate counteracted one another, which left the both poisoners baffled.

A splendid situation that reaches it zenith when Kewdingham eventually passes away and a post-mortem examination reveals he had been "bombarded with poisons." In additional to the previous mentioned poisons, Kewdingham also received a fatal dose of arsenic and atropine! But the experts are unable to "assign any priority of action" to any of the poisons. As the expert said, it's like getting "stabbed through the heart and shot through the brain at the same moment."

How this poisonous puzzle is resolved should have placed this book among the (minor) classics of the genre, but Rolls basically walked away from the story and let the reader sort out the mess he created. I'm not even kidding. The last, open-ended chapter and epilogue were supposed to be very clever and ambiguous, but was really nothing more than pretentious laziness. Martin Edwards warned in the introduction that Rolls found it easier "to come up with intriguing and unusual narrative premises" than "to sustain and resolve a complicated plot," but never expected he would simply walk away from an unresolved story – especially when the text provided a solution that would offer both closure and an ambiguous ending.

The book ended with an inquest, trial and acquittal of one of the characters, but should have ended with the conviction and hanging of Dr. Bagge. There was a tell-tale clue that would be hard to explain in court, namely "falsifying his prescription-book," which would be delayed justice for the undetected (and experimental) murder he had committed in the past. A death only Bagge and the reader knows about.

Finally, the epilogue would have briefly revealed the private thoughts of everyone who had given poison to Kewdingham and left their judgment to the reader. Rolls could have even revealed old Kewdingham as one of the poisoners. One if the few things the old man had to do was pottering about in the small, scrubby garden at the back of the house and could have had something like monk's hood there. He could have intended to poison his daughter-in-law, but his son ended up taking his poison by accident.

So much could have been done with this wonderful and original premise, but the ending reduced this near classic to nothing more than a mere curiosity.

However, this may be my purist streak talking, because everyone else appears to love it. Kate from Cross Examining Crime gave it a near perfect score of 4.5/5 and Norris called it "a minor masterpiece" in his review.
Geplaatst door TomCat on 5/06/2017