The Curmudgeon Got Cut

"The situation is serious, far more serious than you seem able to realise."
- Dr. Constantine (Molly Thynne's Death in the Dentist's Chair, 1932)

Last year, all of the obscure, long-forgotten detective novels by Molly Thynne were reissued by the Dean Street Press, comprising of six titles, which can be divided into two groups of three books each – starting with a trio of standalones and ending with three mysteries about her only series-character, Dr. Constantine.

I reviewed all three of her series titles, shortly upon their re-release, but decided to temporarily store the remaining ones on the big pile. It was a decision I now slightly regret, because the subject of today's blog-post is easily the best detective story I have read by Thynne so far. 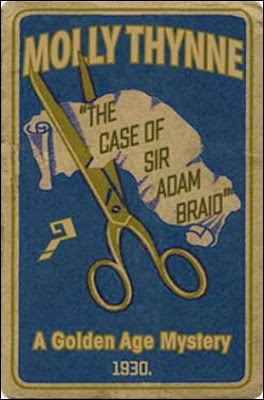 The Case of Sir Adam Braid (1930) is the last of the three standalone novels and opens in the London flat of a distinguished, but cantankerous, artist with a penchant for malice and hoarding money, which may be at the root of his untimely demise. On the evening of his death, Sir Adam was pouring all of his venom into a response to his granddaughter, Jill, in order to put an end "to the hopes of the one relative he possessed who did not actively dislike him."

Jill had made the foolish mistake of asking her ill-tempered grandfather for an advance on her inheritance, as she really needed the money, but a murderer's hand prevented the completion of the letter and this secured her position as his heir – as well as giving her a cast-iron motive when Sir Adam's body is found with "a cut at the back of the neck."

There are, however, more potential suspects for the police to consider who live in, or were around, the flat where the murder took place.

Sir Adam's long-suffering manservant, Johnson, was drinking a pint of a beer and discussing horse-racing at "The Nag's Head," which is an alibi, but subsequent investigations exposed he still had a thing or two to hide. Someone who also has something to hide are the occupants of the top-floor flat, Mr. and Mrs. Smith, who are not entirely unfamiliar with the police. A brother and sister, Everard and Bella Webb, occupy the ground-floor flat and they're "born gossips," but do these two splendid characters know more than they shared with the police?

Luckily, Chief Inspector Abel Finn finds an ally in an old friend and neighbor of the victim, Dr. Gilroy, who's normally too busy peering at bacteria through a microscope, but catching a glimpse of Jill is all the motivation he needs to get himself involved – which provides the plot with a pinch of romance. And they have some serious clearing up to do before they can get to the heart of the case.

Several of the previously mentioned characters have something of an unlawful nature to hide, which are not always (directly) tied to the slaying of Sir Adam, but require clarification for the plot to advance. The plot-strands that are directly tied to the murder consists of a missing hat-box (stuffed with banknotes), stolen jewelry and the quarreling voices heard coming from Sir Adam's flat around the time of his death. All of these problems, unanswered questions and developments are keeping Finn and Gilroy on their toes, which makes for a pleasantly busy and complex detective story. A detective story that could've easily become a tangled mess of plot-threads, but they were all firmly within Thynne's grasp and were only let go off once she was done with a specific thread.

However, Thynne's greatest accomplishment here is how she actually managed to prevent the solution from becoming an anti-climatic disappointment.

The identity of the murderer and the motive is not what you would expect to arise from the premise of the plot, or any kind of classical whodunit for that matter, but all of the evidence was there. And it was used to play on the least-likely-suspect motif. I liked it.

So, to sum up this review, The Case of Sir Adam Braid is a well written, competently plotted Golden Age mystery with a purity of at least 22k. I genuinely hope the other two standalone titles, The Draycott Murder Mystery (1928) and The Murder on the Enriqueta (1929), will be able to match, or even surpass, this one.

P.S. I was constraint for time when I began to write, which is why this hastily slapped together review is shorter than usual, but I'll back to my rambling old self for the next one.
Geplaatst door TomCat on 5/20/2017