Return from the Grave

"If Dr. Fell could not cure this devil case, then perhaps Father Brown could exorcise it."
- Thackeray Phin (John Sladek's "By an Unknown Hand," from Maps: The Uncollected John Sladek, 2002)

Andrew M. Greeley was a Roman Catholic priest, a sociologist, newspaper columnist and a bestselling author of novels and non-fiction books, but the themes dominating all of his writing were religion and social issues. So how did such an author managed to find his way on to this blog, you ask? A good chunk of Father Greeley's novels are detective stories with a proclivity for impossible crimes. Yes, I'm very predictable. 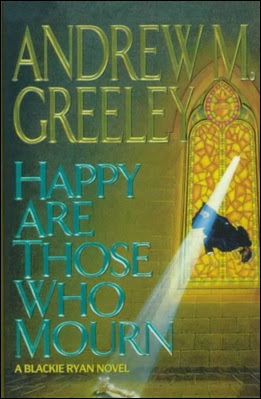 Of the more than fifty novels, there are seventeen titles that make up Greeley's once popular series about his clergyman detective, Bishop Blackie Ryan, who has acquired a reputation as a debunker of paranormal phenomena and solver of locked room puzzles – one of his recorded cases concerns an impossible murder in a haunted tower room. So I assumed that would be a good place to start.

Happy Are Those Who Mourn (1995) is the seventh book in the Blackie Ryan series and begins with Cardinal Sean Cronin stating "that there will be no haunted rectories" in his Archdiocese. Apparently, the late and unpopular pastor of the parish of Saints Peter and Paul, situated in the fictional Chicago suburb of Woodridge, has apparently stirred from the grave to haunt and pester his successor, Father Peter Finnegan.

Monsignor Charles "Jolly Cholly" McInery was "the meanest, nastiest, most vicious nut" in "the whole history of the Archdiocese," but, according to his successor, McInery still strenuously objected "to being murdered in his bed" and has therefore come back to haunt the place – like switching the TV and lights on-and off. There are, however, some facts arguing against the phenomena being caused by the restless and unavenged spirit of a murdered man. One of them is that the cause of death was determined to be a massive cerebral hemorrhage and the other one is that the body was found inside a locked tower room.

So the Cardinal tasks Blackie with laying the ghost to rest by uncovering the truth behind the pastor's death and his investigation is the proverbial mixed bag of tricks.

The early chapters detailing Blackie's initial investigation of the haunted tower room has an excellent scene, which could have been plucked from either a Hake Talbot novel or a knock-off of The Exorcist (1973). Blackie is met with "a barrage of magic tricks" when he entered the room. Desk doors opened and shut on their own accord. The TV flipped on. A crucifix on the wall tilted sharply to one side and a grandfather clock chimed manically. Blackie just walked through the room and muttered, "cheap magic."

However, you should not expect too much from these ghostly activities or the locked room puzzle. Sure, the problem of the tower room has some architectural points of interest, but the crux of the trick is something that should've stayed in the nineteenth century and not reused in the twilight years of the twentieth century – except, perhaps, in a tongue-in-cheek detective story. And this was definitely not a cheerfully written, comically-styled mystery novel. 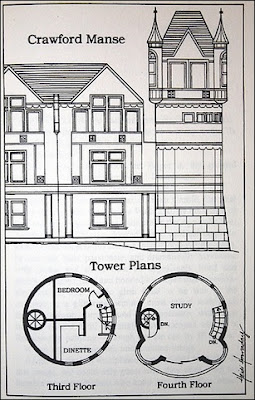 Still, this slightly updated, but still outdated, locked room artifice was far better than the explanation for the supernatural phenomena, because those so-called cheap tricks were explained away as genuine poltergeist activity. Sure, Blackie gives some halfhearted, pseudo-scientific explanation about how the "memories of the agony and horror" left a "psychic imprint on the place," but that's not the kind of explanation you want from a detective novel billed as a locked room mystery. Luckily, the impossible crime and the haunting were not the primary focus of the plot.

Essentially, Happy Are Those Who Mourn is a character-driven crime novel and Blackie is mostly occupied with attempting to unsnarl the webwork of complicated relationships and long-guarded secrets, which also involves financial shenanigans with ten million dollars of missing church funds. At times, all of these revelation of hidden, or embarrassing, secrets and relationships pushed the book in the direction of soap opera territory, but showed Greeley was capable of plot construction. Sadly, it was used on the characters instead of strengthening the "intricate, serpentine conspiracy" at the heart of the plot.

As you can probably judge by this review, I have not all that much to say about the plot and ended up feeling very indifferent about the book.

The most promising aspects of the story, such as the potential the locked tower offered, petered out into nothing and was not particularly invested in the characters. I imagine readers, who do care about all of the character-development, will be annoyed by the two messy and completely unnecessary murders crammed into the final quarter of the book, which have very little to do with the main plot-threads. I suppose Greeley only included these murders to pad out the story and reach the page-count his publisher desired.

Despite having all the ingredients of a classically-styled locked room mystery, Happy Are Those Who Mourn was really a modern crime novel masquerading as a traditional, old-fashioned detective story. So you might end up not caring for the book, or even hating it, if your taste in crime-fiction runs along the same lines as mine. However, I'll probably give Greeley a second look if I ever stumble across a copy of Happy Are the Meek (1985), because that one sounds like it could be a proper locked room mystery.

So this was the second contemporary impossible crime novel, in short succession, that was less than impressive. And just like the last time, I'll try to dig up something good to make up for this poor, lackluster review. So don't touch that dial!
Geplaatst door TomCat on 5/02/2017