Joseph Commings began writing detective stories against "the unlikely backdrop of a pup tent in Sardinia during the Second World War" simply for "the amusement of his fellow soldiers," but back home there was a booming market for magazine fiction and his short stories appeared in numerous publications over the decades – ranging from Ten Detective Aces to The Saint Mystery Magazine. During those decades, Commings carved out a niche as one of America's premier writers of short impossible crime stories that can stand comparison with the best by Edward D. Hoch and Arthur Porges. 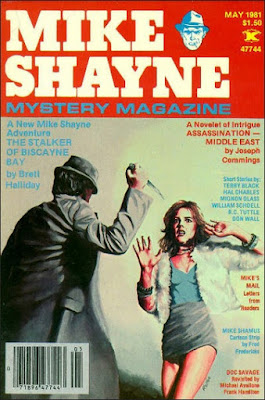 Nearly all of his stories featuring his "formidable extrovert Yankee congressman" detective, Senator Brooks Urban Banner, are "stuffed to the gills with locked room lore and traditional Golden Age ambience." Sadly, the magazine market had largely dried up by the 1950s and Commings went through periods of complete obscurity and rediscovery, which came on top of a massive stroke in the early seventies that took away most of the use of his right hand side. A bright light came twelve years after he passed away when Crippen & Landru published Banner Deadlines: The Impossible Files of Senator Brooks U. Banner (2004) collecting fourteen stories and came with an excellent introduction by the late Robert Adey. We've been waiting ever since for a second volume.

So why not treat myself to a little preview of that future second collection of Banner stories by reading three, previously uncollected, stories with one of America's greatest detectives in the lead? Actually two uncollected stories, because the third was collected in Banner Deadlines under a different title, but I sorely needed reminding how great that story is. And, as usual, special thanks to Alex, of The Detection Collection, who helped guide me to these stories.

"Assassination—Middle East" was originally published in the May, 1981, issue of Mike Shayne Mystery Magazine and presents the gargantuan, harrumphing Senator Brooks U. Banner with a two-pronged problem within the American Consulate in Turkey – a disappearance and shooting like the one "that fired off World War I." Nathan Cross works in the Foreign Service at the American Consulate and is on his way to deliver passports and visas to two West Germans immigrants, Peter and Arla Geist. There was, however, a small oversight. Peter Geist forgot to sign his application and Cross needs his signature before he can hand over his passport, but all Geist does is performing a vanishing act with Cross as a witness. During his absence, "the Consul General had been shot dead by an Arab assassin" during a dinner for ambassadors, diplomats and VIPs. Luckily, one of the guests was nobody less than Senator Brooks U. Banner.

Simply as an impossible crime story, "Assassination—Middle East" cannot be counted among Commings best and most inspired stories with two simple problems with equally simple solutions. But, to his credit, my solution to Geist's disappearance was only half correct. Just nothing to get excited over. What was interesting is the story's setting and the diplomatic background, which reminded me of the recently discussed, 1960s mysteries by Charles Forsyte.

"Murder of a Mermaid" was originally published in the August, 1982, issue of Mike Shayne Mystery Magazine and is the shortest of the three stories discussed here. Senator Banner was driving back to New York when he decided to invite himself to the estate of a champion swimmer, Aimee Waverly, but found her half submerged body in the swimming pool. Aimee Waverly's body had been in the water for nearly a week and coroner is stumped, because she "fought something in the water until she went under" that left no bruises on her body. She was a championship swimmer who could out swim anybody and "break any death grip you get on her," which begs the question how someone could have drowned her without leaving a mark on the body. Something supernatural?

So more of a how-was-it-done than an impossible crime, but with a truly diabolical and original solution that can only be described as vintage Commings. I thought the murderer had thrown a weighted net over Aimee, which would have been a simple, elegant explanation for the signs of a struggle (worn nails and torn, scraped fingers) with something that didn't leave any marks on her – a net that could later be retrieved with a pool safety hook. I thought it made sense. Commings had a better and much more ingenious kind of trick hidden up his sleeve. 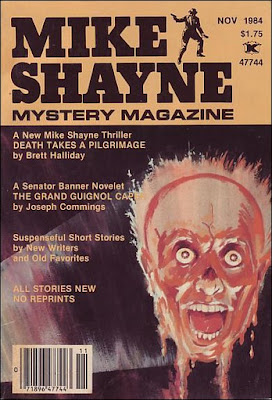 The third and last story is better known today under its alternative title, "The Vampire in the Iron Mask" (collected in Banner Deadlines), but first appeared in the November, 1984, issue of Mike Shayne Mystery Magazine as "The Grand Guignol Caper." I'm afraid I didn't fully appreciated "The Grand Guignon Caper" the first time around, because it's an unapologetic imitation of John Dickson Carr that can stand with the best by Paul Halter!

Colonel Walter Seven, of the Division of Criminal Investigation of US Army, is dispatched to post-war France to track down a hero of the resistance, Guy St. Hilaire, to pin the Medal of Honor on him. Guy St. Hilaire "killed over forty Krauts in hand-to-hand combat" and made "the way a little easier for the entrance of General Leclerc's armored division into Paris on the Day of Liberation," which brings him to an old chateau converted into a school on the outskirts of Paris. He lives and works there as a reclusive schoolteacher and reluctant to accept the medal, but Colonel Seven notices the bruises on the arms of a female schoolteacher, Lucienne Gallon. And that leads to a fight. Before they can come to serious blows, a schoolboy runs in to tell that his friend was just strangled by a vampire in the cemetery!

Achille Simplon, Pierre Cricq and Raoul Pax were in the cemetery, "horsing and pegging snowballs at one another," when a cloaked, faceless figure with iron teeth came up from behind a tombstone – seized and strangled Raoul. Achille and Raoul managed to get away and when they investigated found the footprints of the monster. These "particular tracks" lead from an old mausoleum dedicated to Duc de Gotha and back to it again, but Duc de Gotha had been beheaded during the French revolution and his resting place had not been entered in more than a century. It took two people to unlock and push open the rusted door with the cobwebs hanging undisturbed across the entrance, but upon entering, they discover someone had recently written "VAMPIR" in the dust on the coffin.

While all of this is going on, Senator Banner arrives to pin a medal on St. Hilaire and immediately has to give away his best imitation of Sir Henry Merrivale as Colonel Seven wonders whether it was "too many locked rooms" or "too many aperitifs" that "finally made Banner as crazy as a bedbug." But there's reason to his madness. Whether it's stating that knowing the answer to the locked tomb would leave them even further away from the solution to trampling on evidence in the snow. Everything worked and fitted together better than my Watson-like memory recalled.

"The Grand Guignol Caper" succeeds not because of a single trick, twist or a grand surprise, but it's tapestry plotting with its various, independently moving parts coming together in a logical and convincing way to create a truly baffling crime. Something in the spirit of the cussedness of all things general. And to make it even more Carr-like, the story has a short, but spirited, fencing scene when Colonel Seven and St. Hilaire decide to have a duel. Because why not? Highly recommended!

So, to make a long story short, these three stories perfectly samples Commings ability as a short story writer and plotter with and imaginative, often original bent of mind. A genuine unsung master of the short locked room mystery story. Just listen to the deafening silence emanating from The Invisible Event.