Paul Halter is an unapologetic, traditionalist detective novelist, specialized in locked room mysteries and impossible crimes, who nonetheless has a bleak, cynical and modernist streak running through his novels and short stories – which are scattered across the good-bad spectrum. Halter can go from penning La montre en or (The Gold Watch, 2019), one of the best impossible crime novels of the 2010s, to churning out the amusing, but decidedly second-rate Le mystére de la Dame Blanche (The White Lady, 2020). So opinions among locked room fans also tend to be all over the place. Where we all can agree is that Halter has a lively imagination allowing him to cram his stories with entire parades of apparently supernatural occurrences and impossible murders. What he does with those miraculous crimes and how they're explained away is usually where his stories succeed or fall. And there are some in the middle, grayish area of the spectrum dividing opinions like the criminally underrated Le cercle invisible (The Invisible Circle, 1996). 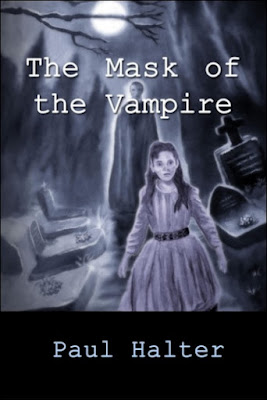 The latest Paul Halter translation from the hands of John Pugmire, of Locked Room International, is one of those novels brimming with unearthly incidents and locked room murders. Halter delivers on practically all of them!

Le masque du vampire (The Mask of the Vampire, 2014), set in 1901, begins with two different stories that are slowly intertwined and twisted together. Firstly, Owen Burns tells his chronicler, Achilles Stock, he has been preoccupied by a remarkable case that was brought to his attention by Inspector Wedekind of Scotland Yard. An old, working class man, named John McCarthy, asked on his deathbed for a priest and Father Donovan answered the call. Whatever had weight on McCarthy's conscience, Father Donovan took that secret to the grave as he was run over by a carriage on his way home. McCarthy died several hours later. So there was nothing too extraordinary about "an old man dying on the one hand" and "a simple traffic accident on the other," except an unfortunate coincidence, but a piece of paper found on the priest reveals a potential link to a 5-year-old, unsolved murder – eulogized by Burns as "a locked room crime of the very first order." An elderly, reclusive woman, Violet Starling, who dabbled in spiritualism was found strangled in her first-floor flat in "a hermetically sealed room" with the door and windows locked and bolted on the inside. It was the victim's name that was written on the piece of paper.

The second storyline centers on the village of Cleverley where strange thing happen among the forest of tombstones, ruined abbey and a cursed pond that form the cemetery. A small boy walking home witnessed a man, clad in "a voluminous cloak with the collar raised," appear out of a cloud of smoke to fumble with "a thin cord, knotted in several places." Nearly a month later, a little girl "follows a strange cloud of smoke as far as the cemetery" where she is attacked. This prompted some of the villagers to take action.

Cleverley blames Dorian Radovic, a Russian Count and antique dealer, whose crime was not merely being a stranger, but having had "the temerity to marry the heiress of the village," Rosa Eversleigh, upon his arrival and the tragedies that followed in its wake that left two people dead – a child from the village and the countess. Rosa drowned herself in the haunting pond which "exerted a dangerous fascination over those weak-willed." A year later, Radovic remarries Marjorie Walker, but she died of a heart attack and villagers swear to have seen her ghost taking nocturnal walks. And there were implications her ghost was restless because her husband had killed her. So, when the girl was attacked, the vicar, blacksmith and a salesman decide to investigate the Eversleigh family vault where they make a startling discovery. The burial vault has been desecrated, stakes had been driven through the hearts of the Count's dead wives and one of the corpses "had not deteriorated in the course of eighteen months." This is still only the beginning as evidence and public opinion turn heavy against the Count. Most astonishingly, of all, the count walked pass a mirror several times without his reflection being seen in it! 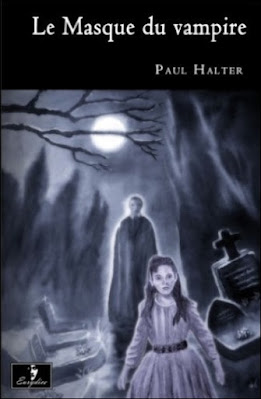 So, in the face of all these inexplicable incidents, Radovic's third wife, Elena, asks a friend, Ann Sheridan, to come down for support. This is where the pace slows down a little as the middle portion of the story follows Ann and Elena as the situation worsens. And, to be fair, it exposes Halter's biggest flaw. Uneven as he may be as a plotter, what has always hampered his (technically) historical mysteries is that they often lack a sense of time and place with characters acting out-of-time. I think a stronger presence of the historical settings would have elevated both his very best and very worst novels. Paul Doherty can get away with a minor or even a weak locked room mystery, like The Herald of Hell (2015) and The Great Revolt (2016), because he fully deploys their historical settings. Same can be said for the historical locked room mysteries by John Dickson Carr (e.g. Captain Cut-Throat, 1955) and Robert van Gulik (e.g. The Chinese Gold Murders, 1959), but it's something I have come to accept from Halter. And, as someone once observed, Halter strove for "an entertaining story, not authenticity." It's just that novels like The Mask of the Vampire remind me how much better they could have been with a dab of historical color.

Anyway, Owen Burns, Achilles Stock and Wedekind eventually come to the Cleverley when one of the villagers got strangled to death inside a locked room, which mirrors the 1896 murder of Violet Starling, but there were three witnesses to the murder – who were standing outside the door and windows of the house. What the two witnesses at the window saw was the murderer "disappear up the chimney as a cloud of smoke." Halter may be hopeless with his historical settings, but never let it be said the man doesn't know how to stage a locked room mystery. The uproar continue right up till the end, but, by that time, Burns begins to see the pattern in all the incidents. And he points out "the three essential links," or clues, between the cases: "two silver bullets, the spinning wheel and the spiritualist séances." Achilles Stock is a most useful as the Dr. Watson to Burns' Sherlock Holmes. Producing "a succinct recapitulation of everything that has happened," chronologically ordered and meticulously dated, as well as unwittingly giving Burns an idea how one of the locked room-tricks works. A scene that reminded me of coffee scene from the Jonathan Creek special Satan's Chimney (2001).

If you pack your plot with locked room murders and apparently supernatural occurrences, the denouement is going to eat up pages. But rest assured, the explanation to every impossibility is different and more than justify the lengthy conclusion.

The locked room-trick used in the murder of Violet Starling is a clever elaboration on an old dodge while the second locked room murder has a more complicated and involved solution, but nicely done with the added effect of the fleeing cloud of smoke. Suggesting the presence of a real vampire who can turn into fog or smoke "to traverse small openings such as chimneys, keyholes, or a minuscule gap in his coffin if it is closed." The problem of the incorruptible body is, by itself, not too spectacular, but dovetailed nicely with the overarching plot and the absence of Radovic's reflection is a small triumph. One of Halter's most original and inspired ideas which really should have been put to use in a separate short story or novel. Something along the lines of Carr's radio-play "The Man without a Body" (1943). I really enjoyed that one and the diagram was very much appreciated.

What I appreciated even more than all the impossibilities and the "avalanche of mysteries from the start," is the overarching plot and how everything tied together while toying with the expectations of the genre-savvy reader (ROT13/SPOILERS: n gjvfgl, zhygv-ynlrerq gnxr ba gur crefrphgvba cybg jvgu ivpgvzf naq crecrgengbef cerlvat ba rnpu bgure). You shouldn't expect anything close to realism and even by detective story standards, or Halter's own track record, the plot is extraordinarily rich. But that's what The Mask of the Vampire one of the better, more entertaining of Halter's locked room mysteries. Not in the same league as his very best efforts, but The Mask of the Vampire could very well end up in my bottom five of top ten favorite Halter novels. A locked room reader's locked room mystery!