The Manuscript Murder (1933), originally published as by "George Limnelius," is the third of only four novels written by medical officer and World War I veteran, Lewis G. Robinson, who drew on his military career to put together four semi-inverted, character-driven and usually soundly plotted detective novels – nearly all sporting some sort of locked room mystery or impossible crime. I previously reviewed Robinson's first and final detective novels, The Medbury Fort Murder (1929) and The General Goes Too Far (1936), which are both fine examples of vintage crime and detective fiction, but The Manuscript Murder is his masterpiece. 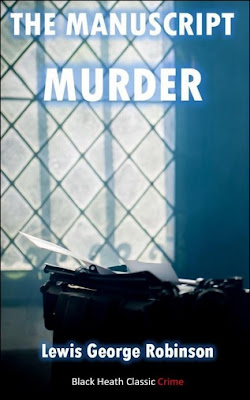 Robinson's The Manuscript Murder starts out fairly conventional with four men seated round the dinner table of a comfortable Plymouth residence, "The Chestnuts," which is the home of Sir Oscar Horton. A typical retired British colonel who's entertaining three of his old Service friends on the day of his wedding, Torquil Swayne, Kit Vaspell and Joseph Marks, but the conversation turns from their host's honeymoon plans to detective stories and murder in general.

Joseph Marks is the detective novelist "Mark Jessup" and author of the long-running Inspector Flam series, which "already exceeded fifty full-length novels." Marks tells his companions that "the difficulty with murder plots is to provide a motive of sufficient intensity," because "people rarely murder lightly" in real-life. And he gives an interesting reason why he excepts poisoners from the extremely rare malice aforethought category (lacking "the toughness of fibre essential to the neat execution of a murder of violence"). Swayne counters that he and Vaspell have half a dozen "adequate reasons" between them to either kill the famous mystery writer or Sir Oscar. Swayne jokes he will run through a perfect murder plot with Vaspell later that night, but that very same evening Sir Oscar is murdered like a character in a fancifully-plotted detective story.

At nine-five, the butler served Sir Oscar coffee in the sitting room ("minor variant from the library"), while the newly-minted Lady Horton is in the drawing room and the butler retreats to the kitchen until returning to the sitting room at nine-thirty – where he discovers the murder. Sir Oscar had been shot, stabbed and strangled! What the police surgeon finds only deepens the problems for the Chief Constable, Major Weston Pryme. The murderer shot Sir Oscar in the back of the head, but not at point-blank range as there are "no marks of burning" around the wound, which turns the murder into a quasi-impossible crime. The angle at which "the bullet entered the head precludes the possibility of the shot coming from outside the window." And then there's the clue of Sir Oscar's cigar that "did not go out until eight minutes after it was lit." This gave the murderer a window of 8-10 minutes to silently commit a murder without being heard and get away unseen.

So there you have a great, deceivingly simplistic opening to a good, old-fashioned detective novel recalling Anthony Berkeley (The Second Shot, 1930) or Agatha Christie (Cards on the Table, 1935), but then The Manuscript Murder goes off script. 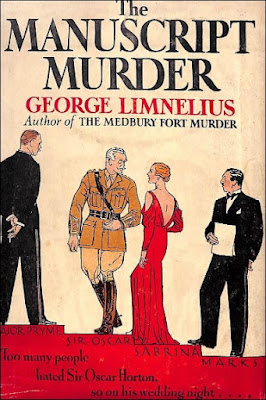 Joseph Marks is working on a new novel, The Quality of Murder, in which he casts Swayne and Vaspell as Sir Oscar's murderer and hands over the manuscript to Major Pryme. The next eight chapters come from Marks' manuscript covering the long, sometimes difficult relationship between the four men beginning during the old days at the military barracks right before the outbreak of the war and picks up again after the war with excursions to pre-war Paris and post-war South America. And, as time marches on, it becomes apparent they have murder in their heart. Sir Oscar is depicted as not the most sympathetic of characters and stands between Swayne and Vaspell and the two women they desire. But how reliable is Marks' fictitious murder mystery come to life? Marks tells Major Pryme he simply used his creative license to twist "every factor in order" to "demonstrate how those two might desire and contrive Horton's death." And filled in the gaps with "deductions, inferences, guesses." So he's asked to write a conclusion to his story and meet to compare notes with his two friends.

The Manuscript Murder is another good example why Robinson's novels are called semi-inverted mysteries, as the reader gets to know who's plotting murder, why and sometimes how, but there's always more than one person with murder on their mind (The Medbury Fort Murder) or blood on their hands (The General Goes Too Far) – leaving it unclear who pulled the proverbial trigger. The Manuscript Murder marvelously muddled the waters and marched on with the second-half of The Quality of Murder, written addendum's by one of the suspects and a superbly done, psychological grounded false-solution that preceded a much more gritty, inevitable one. But it worked like a charm! Robinson's unvarnished, honest approach to characterization, especially where their private life is concerned, coupled with an original bend for plot-construction makes him one those rarities who can be enjoyed by both rabid traditionalists and apologists of the modern crime novel.

If there's anything to nitpick at, it's the uninspired, mundane book title. Why not the muddy the waters ever so slightly more by simply calling the book The Quality of Murder? I thought it was a missed opportunity to not turn Sir Oscar's murder into a full-blown impossible murder. Robinson only needed to be a little mysterious about the nature of the main murder weapon to turn into one of those "magic bullet" puzzles, but, as this is a semi-inverted mystery, Robinson gives that part away almost immediately. A missed opportunity as an impossible angle would have been the finishing touch to a murder "so chuck full of the stock devices of the detective mystery novel." Other than that stylistic smudge and plot oversight, The Manuscript Murder is as fairly clued as it original with all vivid characterization and authentic military background as The Medbury Fort Murder and The General Goes Too Far, but towers above those two novels in overall quality. One of the better reprints from Black Heath and comes highly recommend.

A note for the curious: I wanted to shoehorn this into the review, but forgot all about until I was finished. There is a very brief, but fascinating, discussion in the manuscript about fictitious vs. real-life murders between Swayne and Vaspell. One stating that there's always "a subtle and acute detective to unravel the tangled threads" of "the complicated mysterious murder of fiction," but "these super sleuths don't exist in real-life." So the ordinary, everyday policeman can actually be beaten by silenced pistols, cast-iron alibis and unknown motives. This is, of course, not true, because experience is the whetstone of intelligence. Something even the most average of policeman will always have over the clever amateur criminal. But it made me feel a little better about my own track record in solving these mysterious crimes of fiction. I like to imagine myself to be some sort of armchair detective, like Mycroft Holmes, but usually turn out to be closer to Ludovic Travers with one out of three or four theories turning out to be (somewhat) correct. So maybe closer to Roger Sheringham than Travers. But I try. I try.