Jack McDevitt is an American science-fiction writer specialized in xenoarcheaology, history of the future and the countless mysteries hidden in the unfathomable depths of deep-time, which formed the foundation of the ongoing series starring two antique dealers, Alex Benedict and Chase Kolpath – who run their business more than 9000 years in our future. The series has been compared to a Space Opera Ellery Queen, but McDevitt cited G.K. Chesterton's Father Brown as his inspiration. McDevitt is more interested in answering the question "what on Earth happened" than who, why or how. So their cases concern valuable, often long-lost artifacts and the historical mysteries attached to their potential merchandise. 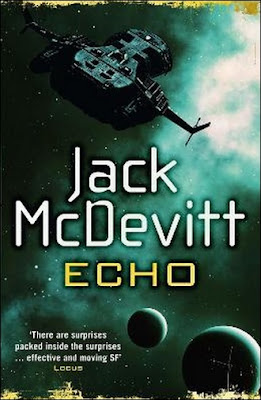 A Talent for War (1989) has Alex Benedict hunting down a legendary warship that got lost among the stars centuries ago. Polaris (2004) is the Mary Celeste of the far-flung future as Benedict and Kolpath try to figure out what happened to a scientific expedition that vanished as by magic while observing an ancient star counting down its final hours. Seeker (2005) took even a step further with a hunt across space-and time for an entire colony that went missing during the pioneering days of space colonization, which is pure science-fiction with a historical mystery as engrossing as James P. Hogan's Inherit the Stars (1977). And an ending to match its premise!

So the steady increase in scope and quality lead me to skip the fourth, thriller-ish sounding novel, The Devil's Eye (2008), in favor of the fifth entry in the series.

Echo (2010) opens with Alex Benedict and Chase Kolpath, of Rainbow Enterprises, coming across a strange object, "a pale white stone tablet," on an auction website and attracting heir attention are the even stranger, indecipherable symbols engraved on the front – an unknown language that can't be identified. Apparently, the tablet was used as a lawn ornament in front of the house that once belonged to the late Sunset Tuttle. A somewhat tragic figure in his day.

Sunset Tuttle had dedicated practically his entire life to searching the stars for alien civilizations and sailed his starship, Callisto, around "the Orion Arm in his fruitless quest." Not entirely fruitless. Tuttle discovered hundreds of so-called biozone worlds of which "only a handful had actually been home to living things." These rare, living worlds "possessed forests and creatures that scampered through them" and "seas teeming with life," but never had he come across a civilization or traces of past intelligence. McDevitt's universe is vast and largely empty as life, particularly intelligent life, is extraordinary rare. The only other intelligence humanity has come across are the Ashiyyur, or the Mutes, but, over the centuries, humanity has began to see them more as annoying neighbors they have to get along with than aliens.

As an aside, A Talent for War briefly mentioned the ancient ruins of a third, intelligent species on a now sun-scorched, dangerous planet, called Belarius, which had been humanity's only evidence anything else had ever gazed at the stars – before their disastrous encounter with the Mutes. Somehow, this is never mentioned in the series again and is noticeably absent in Echo. You would expect it would be a site of prime interest to an exploring hunting for clues of an alien civilization.

So the stone tablet and symbols makes Benedict extremely interested, but the tablet proves to be an elusive Macguffin as Benedict and Kolpath can't seem to get their hands on it. This forces them to take the long-way round by delving into the past of the explorer, track down the people he knew (including a hermit and his wife who have an entire planet to themselves) and rummage the archives and records. This time, the archives and records have precious little to offer coming on top of several assassination attempts and constant stonewalling to the point where there are people who prefer death over divulging their closely-guarded secrets. Consequently, the middle portion of the novel presents the best and worst of the story. 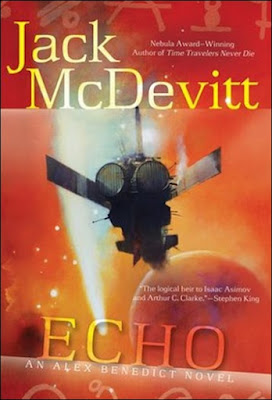 On the one hand, the constant stonewalling without uncovering anything to propel the plot forward comes at the cost of the pace, which really slows down the story. This is padded out with a temporary rift between Benedict and Kolpath who wanted to get away from all the desk work and being called "a glorified grave robber" to her face. Not all that unreasonable. But it really slowed down the story. On the other hand, the stonewalling in combination with the premise hammered down Benedict and Kolpath had a paradox on their hand of Chesteronian proportions. Sunset Tuttle had devoted his entire life to finding someone else out there to the point that his name became a verb, "to tuttle," which meant "to persist in an endeavor with no hope of success." There was a general agreement that, if he had found aliens, he would have organized a parade and "ridden down Market Street with an alien mayor." So, if he was successful, why did he keep quiet?

That brings us to the second problem of Echo. A Talent for War and Polaris had nicely balanced openings and conclusions, while Seeker stands out as the star of the series by under promising and over delivering.

Echo promised a little too much and wisely began to temper my expectations as the ending came in sight, which I found acceptable enough as it was initially presented. Although it retreaded the ending from a previous novel and McDevitt appeared to have been in two minds about the nature of the disturbing secret (ROT13/SPOILERS) svefg fhttrfgvat gur cbffvovyvgl bs n cynargnel trabpvqr, orsber frggyvat ba n qvfnfgre gung pbhyq unir orra ceriragrq). I honestly think the first option would have been more in line with the middle portion of the story, but liked the Twilight Zone atmosphere towards the ending as they began to close in on the truth. I hoped the epilogue would neatly tie everything up by addressing the unanswered questions, but it turned out to be a case of wanting to have it both ways and that rarely works – which kind of ruined everything that came before it. The short epilogue (ROT13/MORE SPOILERS) erirnyrq gung gur pvivyvmngvba Orarqvpg naq Xbycngu qvfpbirerq ba Rpub VVV nera'g gur erzanagf bs n uhzna pbybal gung jnf ybfg gb uvfgbel, ohg uhzna-ybbxvat nyvraf jub bayl unir sbegl-gjb puebzbfbzrf n fbzrjung fybjre chyfr engr naq urnegorng. This was casually thrown out in the last two pages as if it shouldn't have been a major plot point of the story itself.

Regrettably, Echo is the weakest entry in the series so far, but not for a lack of ideas or ambition. But how those ideas were executed. And an ending that wanted it both way. The epilogue really didn't help.

I intended to tackle one of those obscure, long out-of-print Dutch detective novels next, but I might return to Agatha Christie or John Dickson Carr before taking that gamble. So stay tuned!