Last year, I took an excursion into the deep antiquity of the faraway future with the first two archaeological science-fiction mysteries in Jack McDevitt's Alex Benedict and Chase Kolpath series, A Talent for War (1989) and Polaris (2004), who work as antique hunters, dealers and explorers a hundred centuries in the future – a time when humanity had spread out "across more than a hundred worlds." Since humans are going to human, wherever they go, human expansion to space has left its mark on the universe. Abandoned, long-lost space habitats and stations older than the pyramids in our time. Starships disappearing into the void of space and ended up in the seam between history and myth. Derelict ships and failed outposts orbiting distant planets and stars. Even some ancient ruins of a dead alien civilization on a now sun-scorched planet. 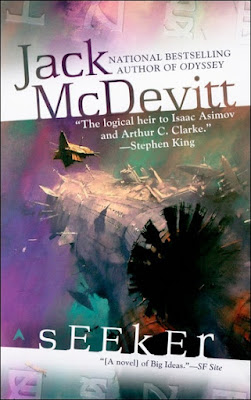 So humanity in McDevitt's universe has accumulated a huge pile of strange stories, unsolved mysteries, dangerous secrets and a ton of collectible artifacts during their nine-thousand years of exploring the stars and settling planets. Some of those secrets and artifacts can spell trouble when the wrong people become interested, which gives the series its "detective pull" and the novels have been likened to Ellery Queen in space. McDevitt cited G.K. Chesterton's Father Brown mysteries as the prime influence of his science-fiction stories as his stories are not so much about the who or why, but "what in Heaven's name is going on here?" The series is perhaps best described as having a "passion for the past, and for the relics that survive the ages, that wait for us in the dark places where no one goes anymore." An attitude perfectly exemplified in the third and arguably best (so far) of the Alex Benedict and Chase Kolpath novels.

Seeker (2005) won the Nebula Award for Best Novel in 2006 and the story is more science-fiction than a space mystery, but the central mystery and solution is in the same league as James P. Hogan's Inherit the Stars (1977). A pure science-fiction novel with a genuine and engrossing mystery, which was so good we appropriated it. And they could very well lose another one! :)

Amy Kolmer approaches Alex Benedict and Chase Kolpath, of Rainbow Enterprises, to appraise a ceramic cup, "sort of thing you might buy in a souvenir shop," but there's "something antiquated" about the green-and-white eagle etched into its side and the Mid-American English symbols – dating the cup back to the Third Millennium ("nobody spoke English in the Fourth"). A little research reveals the cup is possibly linked to the legendary colony ship, Seeker. During the middle of the Third Millennium, the Earth had become overcrowded, torn by war and wrecked with environmental problems. The political leaders of the time had become "increasingly ruthless" and America became a repressive theocracy. A growing group of dissatisfied people, known to history as the Margolians, yearned for freedom and, when interstellar travel became a possibility, they decided to leave Earth. 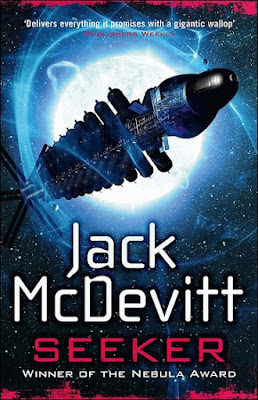 On December 23, 2688 (a mere 666 years in our future), the Seeker carried the first nine hundred people to their secret planet, Margolia, which was the first of three trips together with its sister ship, the Bremerhaven. They made three trips each over a two-year period carrying more than five thousand people to a new world. Their leader told the world that where they were going "even God wouldn't be able to find them." And he was right. Some of the original colonists returned to Earth when the ships came back to pick up more immigrants, but they had no idea where Magnolia was located and the colony, as well as its two starships, became lost to history and passed into legend. So the cup is an eye-gouging rare collector's item, if it really came from the Seeker, but verification is going to take a lot of work.

Chase Kolpath is Alex Benedict's "pilot, social director and sole employee" whose official title is executive assistant and she does most of the legwork during the first part of the story. She begins with tracing back who owned the cup, which begins with their client's burglarizing boyfriend to a forty year old mission of the Department of Planetary Survey and Astronomical Research. This will send her all over the galactic neighborhood.

Chase visits a space station orbiting a black hole, named Morinda, where thousands of researchers and scientists "were measuring, poking, taking the temperature of, and throwing assorted objects into, the beast." Dumping trash into a black hole sounds like something we would do. However, I particularly liked Chase's visit to one of the worlds of the Ashiyyur, or the Mutes, who were the only intelligent species of aliens humanity encountered and our "technological equals" – acting as "sometime friends, sometime rivals, occasional enemies." During her stay on that world, Chase has to go to the Ashiyyurean Museum of Alien Life-forms crammed with stuffed creatures and plants plucked from "living worlds," but they also have the Hall of the Humans dedicated to "the only other known technological species." Ashiyyureans placed us high on the evolutionary scale (just "a step below the Ashiyyur"), even though "our primary mode of communication was yapping." Fair enough. 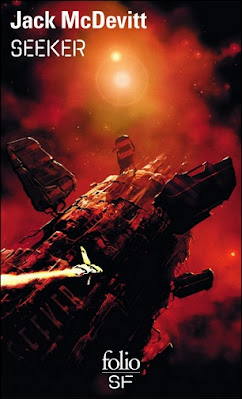 While the two relic hunters are busy at work on the puzzle of the lost colony, trouble is brewing on the sidelines as Alex Benedict and Chase Kolpath have accusations leveled against them of being nothing more than grave robbers and looters. An attack spearheaded by a "near-legendary archaeologist," Casmir Kolchevsky, who's pushing for some serious legislation "to stop the thieves and vandals who make a living looting the past." But there someone else lurking in the shadows who tries to take Benedict and Chase out in more drastic way. So there are some crime fiction elements to be found here, but they were not very inspired and the murderous attempts felt like a retreat of previous novel. Nothing to the detriment to the overall plot as they only served as the B-stories to pad out the main storyline. The main storyline became better, and better, as the astonishing truth of what happened to the Magnolian colony began to come into focus and it's a genuine rug-puller! A truth even more fascinating and intriguing than its premise that both fires up the imagination and makes you disgusted with being stuck in the 21st century.

So not much else can be said about the second-half of the story without giving anything away, but what I can do is unnecessarily pad out the review with an alternative solution that occurred to me while reading.

McDevitt's universe is a lonely, mostly empty space where intelligence is concerned. Only humans, mutes and whoever build those ruins, on Belarius, were the only intelligent creatures who had ever gazed at the story. Since this is a science-fiction novel (not a detective story proper), I began to wonder if perhaps one of the colony ships had accidentally flew too close to a black hole, got flung back in time and settled on a planet where they evolved into the Ashiyyureans – while the second ship simply got lost in space. So the only intelligent species humanity encountered among the stars were human after all (it kind of made sense), but eventually rejected the possibility because surely they would have discovered, sooner or later, a genetic kinship between their species.

By the way, the worlds of the Ashiyyureans is perfect for an impossible crime in the spirit of Isaac Asimov's The Naked Sun (1957)! The Ashiyyureans are a race of telepaths who live in "a society where everybody's thoughts are open" and can boost about don't having "many hypocrisies." Not easy to get away with murder when your thoughts can be openly read. What if a murder happened and everyone's thoughts turned out to be pure and innocent? There's an in-universe solution to the problem. I mentioned in my review of Polaris that there's mind wipe and personality adjustment technology to give criminals an entirely new personality, psyche and memories. What if the murderer uses the technology to create a near-perfect copy of his own personality and memories. Removing only the incriminating thoughts and memories of the murder. After the murder is committed, the culprit reboots his brain and a pre-programmed A.I. removes the device, which then wipes its own memory before replacing it with near-perfect copy without the incriminating memories. Sure, the tempering with the A.I. is bound to be discovered, but that can function as both a red herring and a tell-tale clue.

So, as you can see, this series has been a fun, unexpected back road in my own exploration of the detective story and look forward to Echo (2010). Yes, I'm skipping The Devil's Eye (2008) as it seems to be more of a thriller than archaeological space opera mystery.