One of the luxury problems facing connoisseurs of the traditional detective story today, which is enjoying a veritable renaissance, is the unending avalanche of reprints and translations of once hard-to-find, completely out-of-reach authors, novels and short stories – transforming manageable TBR-piles into mountainous monstrosities. Some of the authors and novels on my pile, like the bodies dotting Mount Everest, seemed to be doomed to be stuck there forever. 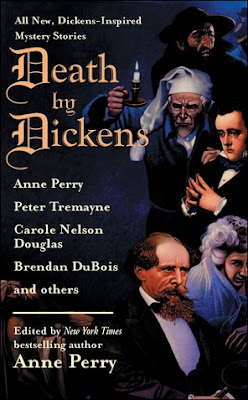 Every now and then, I try to bring one down, but my taste for the obscure and crippling impossible crime addiction tends to take precedence. There is, however, no bullshit excuse why I didn't get to Martin Edwards sooner. An award-winning crime novelist, anthologist, genre historian and a leading light of the current reprint renaissance. So where better to start than with one of his locked room mysteries.

"The House of the Red Candle" was written for Death by Dickens (2004), an anthology of original stories based on Charles Dickens' work, but Edwards' contribution made Dickens the detective and is accompanied by his drinking buddy and budding novelist, Wilkie Collins – who acts as the Dr. Watson to his Sherlock Holmes. Story begins with Collins telling the reader that he could have "woven a triple-decker novel of sensation" from "the macabre features" of the murder of Thaddeus Whiteacre. Dickens had told him "the case must never be solved" and Collins had honored that wish, but enough time had passed "to permit the truth to be revealed."

A story that begins in a crowded, Greenwich tavern where Dickens is acting mysteriously and asks Collins to come with him to the House of the Red Candle. A house of ill repute where he wants him to meet a woman, Bella, but asks him not to ask too many questions until then and to completely trust him. Dickens promises his friend that he "will not readily forget tonight."

When they arrive at the house, Dickens handily convinces the fat brothel-keeper, Mrs. Jugg, they're proper gentlemen with a handful of banknotes, but Bella is locked inside her room with another customer. Only then Mrs. Jugg notices Thaddeus Whiteacre had not paid her enough to have Bella for the better part of an hour, but their knocking is answered with a cry for help. So the door is smashed open and discover Whiteacre, dead and naked, tied with his wrists to the bedstead. Bella is nowhere to be found. She vanished from the locked and bolted room "as if she never existed."

A cracking premise for a historical locked room story with an adequately clued solution, which is more than sufficient to put all the pieces together yourself. The who-and why take precedent over the how as the latter is a direct result of the former with a nice peppering of the general cussedness of things. So it's not a terribly complicated detective story, but, to be fair to Edwards, "The House of the Red Candle" was commissioned as a Dickensian crime story and in that the story succeeded admirably – particular the historical shading of the story was very well done. Purely as a historical (locked room) mystery, Edwards' "The House of the Red Candle" can be compared and stand with Paul Doherty's historical mysteries (c.f. the locked brothel mystery in The Herald of Hell, 2015) as neither sanitized and dolled-up the less romantic, dirty and smudged pages of history. And that makes it all the more interesting when they're used as the setting for a classically-styled detective story. Only difference is that Edwards looks to be more character-driven than Doherty.

So, in closing, Edwards' "The House of the Red Candle" is not the most challenging, or puzzling, of detective stories, but still comes recommended as a well-written and realized historical mystery with a Dickens of a crime.