Dr. C. Francis Roe was a Scottish-born American doctor and surgeon who spend his twilight years making pottery, sculptures and writing medical and mystery novels, which were published during the 1990s under the names "C.F. Roe" and "Francis Roe" – using the former for his eight Dr. Jean Montrose whodunits. Surprisingly, the Headline editions have "A Doctor Jean Montrose Whodunit" on their covers instead of the more common "Literary Thriller" or "A Novel." I guess the series must have enjoyed some popularity during the '90s as the books received multiple reprints under different titles. 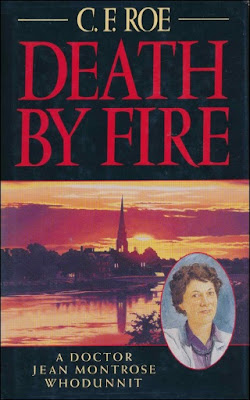 Death by Fire (1990), alternatively published as A Fiery Hint of Murder, is the second novel in the series and jotted down in Robert Adey's Locked Room Murders (1991) as an intriguing case of spontaneous human combustion in a locked house!

Firebugs, or fire-starters, occupy an interesting place in the genre as they rarely figured in pre-war detective novel and short stories. There were fires and arson, but it was usually done to destroy evidence. One such example can be found in my previous review of Gerald Verner's The Clue of the Green Candle (1932), but it was not until the post-WWII era that mystery writers began to see the bag of tricks and plot potential of the firebug. Even then they only appeared in the works of somewhat specialized mystery writers.

John Russell Fearn's Flashpoint (1950) centers on a series of explosions and fires in locked, guarded and otherwise deserted buildings, which is an idea Arthur Porges continued to explore further in some of his short stories like "To Barbecue a White Elephant" (1964) and "Fire for Peace" (1975) – collected in These Daisies Told: The Casebook of Professor Ulysses Price Middlebie (2018). Izo Hashimoto and Tomoshige Ichikawa's 2006, pulp-style manga series Fire Investigator Nanase, not known for its quality art or stories, but "Petals of Envy" has a new and fiery original locked room-trick to offer. A few months ago, I reviewed Shelly Reuben's arson-themed Spent Matches (1996) in which paintings locked away in a secure gallery inexplicably catch fire.

However, those novels and stories concern the destruction of property with "Petals of Envy" being the closest to a case of a spontaneous human combustion, but otherwise, Roe's Death by Fire could very well be the first one to use it in a (locked room) mystery novel. I don't know of any other example.

Death by Fire takes place in Perth, Scotland, during an uncommonly long heatwave with "the dry, airless heat" oppressing and irritating the Scots like normally only the English can do. Seven miles out of Perth, stands a private boys school, St. Jude's Academy, where boys with parents "who wanted to see as little of their offspring as possible" were sent to, but it's not the "constrictive meanness" of the building that's the problem. It's the horrendous teachers from the hell who work there. 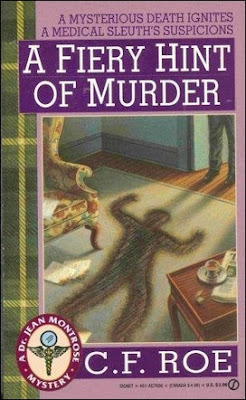 Morgan Stroud, a physics teacher, is despised and hated by pretty much everyone and the opening pages gives the reader an example why so many people could drink his blood. Stroud humiliates a student in class by mimicking his stammer, telling the class his father has fallen behind on the payment of school fees and hurling abuse – calling the boy scum and a "Darwinian reject." So there's more than one reason to treat his death as suspicious when his body is found at his home, torso charred "beyond any kind of recognition," which had two lower legs and hands still clutching the carpet sticking out of the pile of charred flesh – not much else was burned or damaged by the fire. Only thing near the body was a chair with a pile of school essay papers on it, but they're not even singed. There was nothing that could have caused a fire like a heater or gas stove. Even stranger is that the "house is alive with burglar alarms" and protected with "automatic locks on the doors, sensors on the windows" and "under the carpet."

So the local Perth police inspector, Douglas Niven, turns to Dr. Jean Montrose to help him out with the problem, because he can hardly believe there's an actual supernatural element to the case.

The medical background of both the author and his detective-character, I fully expected something along the lines of the previously cited scientific detective stories and writers. Death by Fire turned out to be a modern-day equivalent of a Gladys Mitchell. Well, the classical bits and pieces, anyway, which definitely has a touch of Mitchellian magic and madness. Some of the boys of St. Jude's started practicing black magic to make their hated teacher burst into flames and Stroud's wandering, religious sister, Gwen, believes her brother was "spawned by the devil" and "struck down by a ball of lighting" sent "by the Lord to destroy him." Dr. Malcolm Anderson is the local pathologist and convinced that has an opportunity to examine a rare, but genuine, case of spontaneous human combustion as the body's store of fuel had been inexplicably ignited. He dreams of becoming an instant authority, giving lectures abroad and being consulted by the police as he happily slices "grisly fragments" from the body. There's also a spiritual medium who arrives in town with a ton of media fanfare and predicts "more deaths" and "nothing but trouble here until the weather breaks."

A prediction that provides the story with an ending not unlike the conclusion of Mitchell's The Devil at Saxon Wall (1935), but the most noticeable thing Death by Fire has in common with Mitchell is that crimes against children are punished mercilessly. But this also introduces a stark reminder that the genre's Golden Age had ended three decades before the book was published. 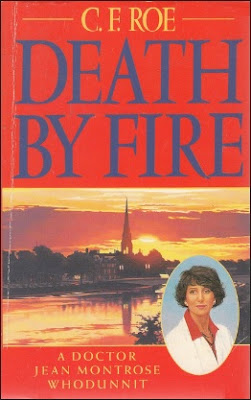 Stroud turns out not to have been the most reprehensible creature teaching at St. Jude's as a
colleague is revealed to the reader as a dangerous predator with a taste for children and teenage boy, which would have been enough to warrant a second murder – only he also tried to make a buck out of it. Roe made an honest attempt here to find a way to bring the traditional, plot-driven detective story in line with the modern, character-driven and much darker crime novels. But this is the only kind of crime I don't want to come across in any type of crime or detective story. A lighter, modern touch to the story is that Dr. Montrose has a happy, lively family life and peripherally linked to the case as one of her daughter is seeing a boy involved with St. Jude's murders (because, of course).

So, how well does Death by Fire stack up as a detective story and particularly compared to the previously mentioned firebug novels and short stories? It's a bit of a mixed bag.

I already knew what kind of trick was used to make it appear as if Stroud had burst into flames, because I've read about it before and suppose it was less well-known in the pre-internet era. So all my hope was on the locked and burglar-alarm protected house, but the solution to that part of the puzzle was disappointingly simplistic and not very satisfying. Such a premise requires a little more ingenuity in its explanation and something that was more or less promised. Why else was the reader's attention drawn to Stroud's mysterious headaches and the large, ornate mirror? The murderer is easily spotted and you can make an educated guess about the motive.

However, while the solution didn't came as a surprise, or shock, the way in which the whole case is resolved was very well done and Dr. Montrose's private talk with the murderer was everything but orthodox – especially how it ended. Something both fans of vintage and modern crime fiction can appreciate. Because we have all wanted to read those lines (Avpr gurbel. Abj cebir vg). Add to this a fair attempt at clueing and it managed to warm up, what would otherwise have been, a lukewarm, quasi-negative review. It was just enough not to leave me disappointed.

Even if you narrow the scope to '90s mystery novels with a traditional slant, Death by Fire doesn't make it to the top of that pile, but I'e also read much worst novels from that decade. So there's a change I'll try another one, like A Hidden Cause of Murder (1996), if a copy ever comes my way.

I also try to find something good and solid for my next read because the quality has been very uneven lately.