"The devil's agents may be of flesh and blood, may they not?"
- Sherlock Holmes (Sir Arthur Conan Doyle's The Hound of the Baskervilles, 1902)

Gladys Mitchell's The Devil at Saxon Wall (1935) is the sixth recorded case of her psycho-analyst detective, Mrs. Bradley, which was reportedly inspired by lecture on witchcraft given by her personal friend and fellow mystery novelist, Helen Simpson – who famously gave Mrs. Bradley her second name, Adela, when they exchanged detectives in Ask a Policeman (1933). 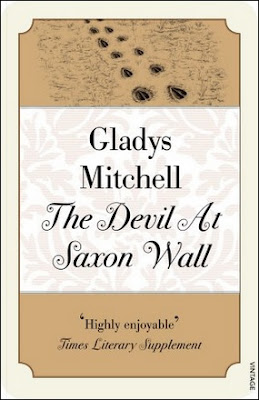 The Devil at Saxon Wall has a hell of a reputation with Mitchell's acolytes and has often been cited as one of her best novels. Nick Fuller even listed the book alongside the well-known masterworks by Anthony Berkeley, Christianna Brand, John Dickson Carr and Agatha Christie, but can the book hold its own in such esteemed company? Let's find out!

The story begins with what is, essentially, a lengthy prologue covering the first three chapters, which take place during the early years of the 1920s and tells the gloomy tale of Constance Palliner. A story that ended in a double tragedy.

Constance had been an unhappy woman, destined to the existence of a spinster, but her life took an unexpected turn when, at age twenty-four, she accompanied her parents to Naples, Italy, where she met Hanley Middleton at Pompeii – a physician attached to the R.A.M.C. Middleton proposed to Constance mere hours after they first met and she accepted. So they return to England and took possession of a large, old house, called Neot House, standing in an ancient village with a slightly backwards population. And that's where the problems begin to manifest themselves.

The village of Saxon Wall lies in "a remote part of Hampshire" and gives the impression of a place out-of-time. A holdover from the days before Alfred the Great ruled over the island. The villagers looked like a pre-medieval population, described as having "thick, dirty, fair hair, unkempt and more like frayed rope," who "feared and loathed" witchcraft and paganism as much as they participated in it – such as the practice of fertility rituals. I think the depiction of pagan survival in a dark, dilatory village, as old as the hills, is the best aspect of the book. You can feel the presence of history and an ancient history all around the place, which Mitchell used to great effect to further the plot.

Hanley is a silent, preoccupied man, "enamored of long lonely walks" and "whiskey by the half bottle," but a change occurred after the passage of nearly two years and his personality took a turn for the worse. One day, he brought a woman home from a conference and she left after a fortnight with a bruised eye-socket. He began to ill-treat animals and manhandled Constance when she happened to be in his way.

Briefly, Constance leaves her husband and returns to her parents, but when she comes back her husband has descended into debauchery and she finds him with their half-clad maidservant in his arms, Martha Fluke – who's the daughter of the local witch. Old Mrs. Fluke is said to have made a pact with the devil and rumored to have the ability to make adders "dance on their tails by moonlight." Or make them "spell the names of the angels of darkness" at witches' sabbaths. She is said to have a hand in all evil going on in the village and was even implicated by the doctor in the death of her infant grandson. A child who had been born during Constance's absence and had died in her own house. Something she should have taken as a cue to turn around and leave cartoon smoke in her wake, but she stuck around and in the end gave birth to a baby boy, Richard, but passed away soon thereafter. Hanley followed suit when he died during an emergency operation. 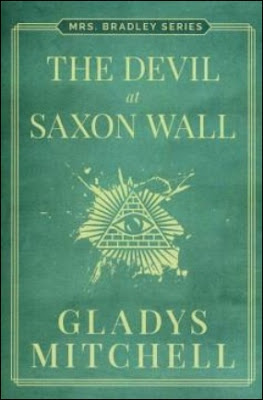 A period of almost ten years passed and "the village peaceable returns to its dirt." The wickedness died down for the most part and the new vicar, Rev. Merlin Hallam, immediately put a stop to the cock-fighting, which had enjoyed "an unbroken survival from the fourteenth century or earlier." On top of that, a persistent drought is slowly resulting in a water shortage and the vicar wants to use this as a leverage against the pagan ways of the villagers. Because his well still holds plenty of water.

So a relatively peaceful period for the village, but it ended when an outsider arrived in their midst.

Hannibal Jones had earned "a dishonest livelihood for seventeen years" by "writing sentimental novels," but suffered a nervous breakdown and severe case of writers block. So he consulted the famous psycho-analyst, Mrs. Bradley, who poked him between the ribs with a yellow claw, cackled horribly, and gave him an unusual piece of advice: go on a hunt for a secluded village and become a part of it – without trying to write about them. After nineteen days of driving, Jones ended up in the remote, drought-stricken village of Saxon Wall and there he blissfully sank into peaceful obscurity.

However, his task to immerse himself in local affairs exposes a number of skeleton and lays bare one of the most twisted, serpentine plots Mitchell ever conceived. A tortuous plot that hard to discuss without giving anything away, but let's take a shot at it anyway.

Jones hears of the deaths of Constance and Hanley Middleton, who had been dead for the better part of a decade now, but local rumors whisper that their child, Richard, was mixed with the supposedly dead baby of the maid – which would guarantee trouble when the boys came of age. One of the boys is believed to be a changeling. There's another tall tale telling of Hanley Middleton's supposed twin brother, Carswell, who was patiently waiting to claim his inheritance. Or the story of a local sailor, Pike, who vanished from his sickbed around the same time Hanley died on the operating table.

All of these whispers are suggestive, mostly unsubstantiated, gossip stories compounded by local obfuscation and plain old superstition. But then a very real and tangible murder is committed at Neot House.

Hanley Middleton's hypothetical twin brother, Carswell Middleton, proved to be more substantially than assumed, because his body was found at the vacant house of his late brother – bludgeoned to death with a poker. Jones dispatches a telegram to Mrs. Bradley, requesting her presence at Saxon Wall, who arrives "grinning like an alligator" and "dressed like a macaw." And luckily she's at the top of her game when she started to pluck at the threads of this intricate skein. 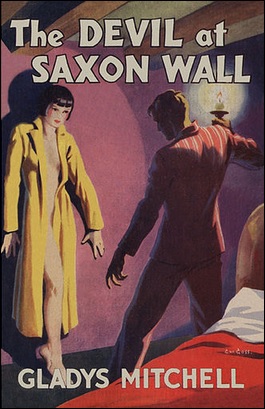 I should remark here that, while the plot is admittedly ingenious, it just might be a little but too much of the good stuff. I know, I know. What is this world coming to when even I begin to complain about a detective story having too much plot, but I think there's an important difference between a complex mystery novel (e.g. The Echoing Stranger, 1952) and a convoluted detective story – which here required an addendum to the final chapter, titled "End Papers," clearing up all the loose ends. Once again, the plot is absolutely ingenious and Mitchell deserves admiration for not losing herself in this labyrinthine story, but this is type of detective novel that can easily leave a reader disoriented. And unsure whether he understood the solution.

However, when you have everything figured out, checked the "End Papers," you can't help the artificial conveniences Mitchell had strewn throughout the book that kept this plot from going. One of these conveniences is that the real Richard must be color-blind, which is used to determine the real identities of both nine-year-old boys. A second one is the handy fact that "the inhabitants of Saxon Wall were incapable of making straight-forward statements" or how the murderer's madness is used as an equally handy linchpin to keep a number of the plot-threads together.

For a third time, you have to admire the intricacy of the plot and how Mitchell plotted a route through this contorted maze, but it all felt very, very contrived. Mitchell has handled similar, trickily constructed, plots with more aplomb (e.g. Come Away, Death, 1937) and grace (e.g. St. Peter's Finger, 1938).

So, plot-wise, Mitchell has done better, but the story-telling is, as always, absolutely top-notch. Something that's exemplified in the final chapter when the murderer's demise coincidences with a massive downpour relieving and cleansing the long-suffering people of Saxon Wall. A powerful scene that has been likened to the fall of Lucifer and the manifestation of God's mercy. But what else could you expect from the Great Gladys.

Overall, The Devil at Saxon Wall went completely into the deep end with the plot, but the story-telling and characterization is vintage Mitchell, which, on a whole, might not have resulted in her best detective novel, but the book definitely deserves a place among her better and more memorable titles. Just take the time to carefully read the explanation and the explanatory addendum cleaning up all the loose ends.
Geplaatst door TomCat on 8/07/2017