"The first thing is to determine the murderer's motive. I don't mean his motive for murder, but for creating an impossible situation. That's very important, son, because it's the best kind of clue to the motive for murder."
- Sir Henry Merrivale (Carter Dickson's The White Priory Murder, 1934)

What never ceases to amaze me is the sheer volume of detective stories published during the first fifty years of the previous century. You can read all kinds of mysteries from this period for decades and still come across writers, or books, you have never heard about. Recently, I found another one of these obscure, long-since forgotten mystery novelists who was credited with writing a locked room novel and that, predictably, attracted my attention – like a moth to a flame. 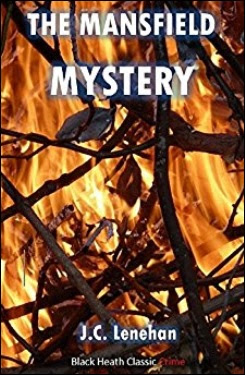 J.C. Lenehan was an English mystery writer, who fought on the Somme during the First World War, but slipped into an ordinary, unassuming existence when he returned to civilian life. Lenehan married, resumed his career as a schoolteacher and started writing detective stories after school hours in the late 1920s. A simple life that ended when he passed away at the age of only 53, in 1943, leaving behind a wife and son who was serving in North Africa at the moment. I assume he was part of the desert scuffles with Erwin Rommel in the North African Campaign. Anyway...

Lenehan also left the world with thirteen, now all but forgotten, detective novels and probably have remained ignorant of their existence had one of them not been listed by Robert Adey in Locked Room Murders (1991).

The Mansfield Mystery (1932) is Lenehan's fourth book and the opening chapters take place on the Fifth of November, Bonfire Night, when the sound of exploding firecrackers and the acrid smell of sulfur filled the air – while children, "like demented savages," danced around a bonfire with a home-made effigy of Guy Fawkes at the heart of the blaze. This the background of a Guy Fawkes Ball at the residence of Gregory Halewood, a senior partner of a solicitors firm, but the festivities are brought to an end by a telephone call from his business partner, James Mansfield.

Mansfield ruins everyone's day by announcing over the telephone that he's about "to blow out his brains" and several people immediately rush to his house, five minutes away from the ball, where they have to force the door of the study. On the floor, sprawled behind the desk, lay the body of the solicitor with a single bullet hole in his head and a gun clasped in his hand. The door of the study was locked from the inside and the window was fastened from within.

So the death is unmistakably a suicide, but a press representative, Norman Glen, who happened to be present at the ball noticed a tell-tale discrepancy in the time-table of events. And this proved to be the first crack in a murder that was "planned as carefully as an army strategist plans an engagement."

Detective-Inspector Kilby, of Scotland Yard, takes over the investigation from the local policeman, Superintendent Flint, who recedes into the background and leaves Kilby with the task of disentangling the murderer from the closely-knit circle of suspects – surrounded by a school of red herrings. On the surface, this makes The Mansfield Mystery appear as a stereotypical detective story of the period, about a man murdered in the confines of his private study, with relatives and associates dancing around his corpse. Unfortunately, Lenehan was about as subtle as a severed, gushing artery wound and practically gave away the entire game in the opening chapters of the book.

Consequently, the story began to slightly drag, because the murderer was staring you dead in the face, but Leneham persisted to play the game as a straight-up whodunit and kept introducing obviously false leads.

Such as the disreputable, drunk brother of Mansfield's foster-daughter, Helen. Or the snuff-addicted confidential clerk of the firm, George Tingley, who gave blackmail the good old college try, but disappeared without a trace and apparently destroyed several ledgers in his wake – which is all supposed to throw sand in the eyes of the readers. However, Lenehan spilled all of the pertinent information in the opening chapters and all these additional plot-threads, or red herrings, accomplish is confirming the obvious. And this leaves the reader with only a couple questions, which are either easily guessed at or were explained away long before the ending.

One of them is the alibi-trick. You can probably guess what happened there, but the final explanation was, admittedly, somewhat cleverer than expected. Secondly, there's the problem of the locked door of the study, which is explained long before the halfway mark as "an easy dodge" and "an ancient one" at that. So the reader is left with little else to do except following the detective as he slouches to the obvious and inevitable conclusion. This makes the book a decidedly mediocre one, but the real black mark against it is that, literally, all of its weaknesses could have been eliminated had Leneham simply written it as an inverted detective story.

The murderer's handiwork and modus operandi was not entirely without interest. A murderer whose idea of getting away with killing someone is providing the police with a ready-made answer. But in spite of the murderer's cleverness, this person is not an expert at killing people and keeps making fatal mistakes. Like shutting the eyelids on the accusatory eyes of Mansfield or throwing his last victim from a moving train followed by an empty bottle of whiskey. So the police found the body first and the bottle second, which is a fact that does not agree with the scenario of an accident.

Detective-Inspector Kilby also has some Columbo-like moments when he interacts with the murderer and one particular amusing scene is when Kilby remarked how a certain "trench would make a fine grave." Once again, this remark shows Lenehan had no idea how to be subtle, but that would not have mattered had the story been an inverted mystery. Now it simply is a blunt giveaway where a body had been hidden.

So, all in all, The Mansfield Mystery is not a badly, or unpleasantly, written detective story, but the mediocre, transparent plotting made the book somewhat of a drag to read once you passed the opening chapters. It's a pity Lenehan failed to realize he was working with all the tools that could have made for a good, solid inverted detective story in a somewhat similar vein as Richard Hull's Murder of My Aunt (1934) and Leo Bruce's Case for Sergeant Beef (1947), i.e. a blundering (amateur) murdering.

But that's enough complaining for now. So allow me to end this blog-post by direction your attention to my previous review, which discusses Theodore Roscoe's I'll Grind Their Bones (1936). A very obscure, but fascinating, pulpy locked room novel set in an alternative time-line on the brink of total war. And I'll probably have something light and more fun for my next post.
Geplaatst door TomCat on 8/16/2017