The Stumble to War

"Fe-Fi-Fo-Fum
I Smell the Blood of a War to Come
Legions Alive Will Soon be Dead
I'll Grind Their Bones to Make My Bread"
- Mother Goose (Song of the Armament Maker, 1936)

Theodore Roscoe wrote short stories and serials for the pulp magazines and periodicals of his day, such as Argosy, Wings and Far East Adventure Stories, who also signed his name to a brace of highly regarded, but rare, detective novels in the locked room sub-genre – both of them have garnered praise from the likes of Robert Adey and John Norris. 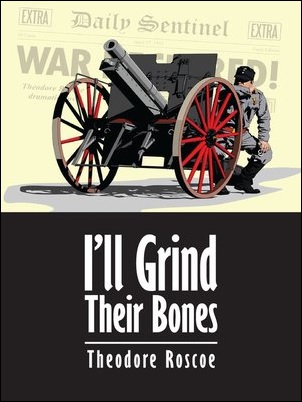 Several years ago, I favorably reviewed the most well-known of the two titles, Murder on the Way (1935), which is best described as Agatha Christie's And There Were None (1939) as perceived by Hake Talbot. The plot threw a grotesque cast of gargoyles into a decaying chateau on Haiti, a place rife with superstition and voodoo practices, where a fatal shooting occurred inside a locked room and a man vanishing, impossibly, from an underground passage. Murder on the Way is a marvelous flight of fancy and a first-grade pulp detective that secured a permanent spot on my list of all-time favorite (locked room) mysteries. And this made it all the more depressing that Roscoe's second impossible crime novel proved to be even more elusive. That is, until recently.

Back in March, "JJ," who blogs over at The Invisible Event, announced he had been collaborating behind the scenes with Bold Venture Press and Audrey Parente, author of Pulpmaster: The Theodore Roscoe Story (1992), in order to bring Roscoe's impossible crime novels back in print – having prepared the text for publication and written an introduction for both editions. So nothing but praise for everyone who worked on getting these once rare, long-neglected titles back on our shelves!

I really can't recommend Murder on the Way enough, but what about that second, elusive locked room novel? Well, let say this, the book is practically incomparable to anything else that has been written in the detective genre. But let's start at the beginning.

I'll Grind Their Bones (1936) was originally published in Argosy as a seven-part serial, titled War Declared, which is set in an alternative universe where names, borders and historical events (slightly) differed from our time-line. The end result is best described as speculative war-fiction that uses a pulp-style detective-and thriller story as a vehicle and even flirted with the Ruritanian Romance towards the end. What impressed me the most is that the book, in some ways, can be read as a nightmarish premonition of the war to come, because some of Roscoe's depiction of the next war proved to be eerily close to what happened when the world stumbled into another global conflict at the end of the decade – making the book only comparable to Darwin L. Teilhet's The Talking Sparrow Murders (1934). One of the first works of fiction that addressed the political, and social, upheaval in Germany during Adolf Hitler's rise to power.

As prophetic as the book is in some regards, Roscoe also drew heavily on the Great War of 1914-18 for the aesthetics of the story and the political powder keg at the heart of the plot. One of these nods to the First World War can be found in the opening chapter.

The lead character of I'll Grind Their Bones is a "correspondent-at-large" for the Universe News Agency, John Keats, who visits a dark, gloomy castle in Transylvania, Rumania, which is the home of a reclusive munitions magnate, Count Vasil Garganoff – who's a poorly disguised version of the real-life merchant of death, Sir Basil Zarahoff. A man who, like his fictional portrayal, was known as "the so-styled Mystery Man of Europe." Some have even called him the living, flesh-and-blood embodiment of Sherlock Holmes' arch-nemesis, Professor Moriarty. A salient detail of history that was surprisingly overlooked by a certain someone when writing the introduction.

Keats was on his way to report on the conference taking place between the Iron Premier of Teutony (Germany) and the Foreign Minister of Esperance (France), but Count Garganoff granted a rare interview to the American reporter. 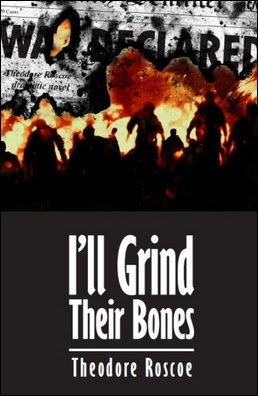 Only news Count Garganoff has to tell Keats' readers is that he turned down the invitation to attend the closed door conference and asks to put in print that he would appreciate it if these "blundering statesmen" would omit him from their "proceedings in the future," but the munitions magnate also has a lucrative, off-the-record offer for the reporter – one that would allow him to walk out of their meeting with a hundred grand in cash. Count Garganoff wants Keats to cease his "literary attacks" on the Hertha Gun Works and accept the money to take "a two-year leave of absence" from his "strenuous literary activities." Keats is even promised to be the next recipient of the "the Godell Peace Prize," but turns down both and that's when the problems begin to pile up all around him.

A stray bullet penetrates the rear window of his car, as he and his cameraman, Crazy Hooper drove away from the castle, while, at the Hotel Metropole in the Teutonic capitol, someone threw a Russian knife at him. Someone was obviously out to get him, but then everything around him began to accelerate when shots were fired inside the sealed conference room at the hotel.

Apparently, Baron Sigismund von Speer (Iron Premier) and Victor Gatreau (Foreign Minister) had "shot each other to death" during a heated debate inside a locked, guarded and soundproof conference room at the hotel.

Gatreau was a well-known duelist in his country and had emptied his pistol on the Teutonic premier, who only needed two bullets from his Luger, which proved to be convenient excuse to start beating the drums of war. This is another aspect borrowed from the First World War when the assassination of Archduke Franz Ferdinand and Countless Sophie acted as a prelude to, what is arguably, the stupidest thing we've ever done on the European continent.

Meanwhile, in the middle of people yelling "Heil Schnitzler" and "Gott strafe Esperance," Keats acts as a true pulp-protagonist by stumbling from one complicated situation into another: a young cub-reporter from the London Observer, Philip Shepler, was murdered in his hotel room and the hotel is subsequently torched to the ground. A beautiful press representative of the Soviet Tass, named Alexandra Frantsovna, tells Keats she witnessed the double shooting through the windows and swears shots had been fired by a third person she was unable to observe. But that would make the shooting a double murder of the impossible variety!

All of this, and more, is what Keats finds on his path when he travels from the Teutonic capital to the European headquarters of Universe News in Esperance, but then a war exploded "in the heart of the puzzle" and blew "the fragments a thousand ways." And, as a consequence, the detective-and thriller elements of the book (briefly) take a backseat to the war, which consist of several well-written, fascinating and even prophetic chapters.

Der Meister of Teutony, August Schnitzler, had declared there was a "danger-of-war" followed by an apocalyptic attack on Esperance's capital city from the air with "aerial torpedoes" (rockets) and marked the "first time in history they've been used to reduce a city" - providing the book with prophetic image of the German V-1 and V-2 rockets that would rain down in London in World War II. Roscoe was reportedly a naval historian, who had been commissioned by the US Naval Institute to write several books about Navy operations, which likely gave him some insight in the military capabilities of future wars. 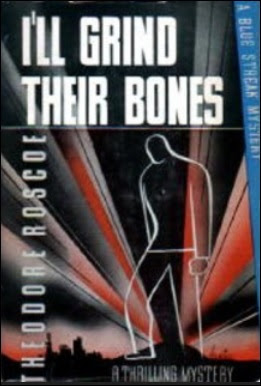 Keats stumbling through the smoking, corpse-littered rubble of the city makes for a haunting and powerful scene. One that sadly would become a stark reality only a few short years later.

A second prophetic, but very brief, scene is when the Teutonic army occupies the fictitious Kingdom of Helvania and mentions squadrons of parachutes that made it look as if "the sky was raining men." Paratroopers were first used, on a massive scale, during the World War II. There were, however, other things that were less prophetic or grounded in reality. One of them was the ridiculous easy invasion of Switzerland and the other was the premature end of the three-way war between Teutony, Espererance and Helvania, which bordered on the ludicrous and hopelessly naive to boot. You would not have beaten the real Nazis as easily as that.

So the rapid deterioration of the political ties between two countries and the subsequent war makes for fascinating reading, especially when you realize it was written several years before the actual war took place, but what about that double murder in Hotel Metropole, you ask – which appeared to have all the earmarks of an impossible crime. Well, the explanation as to who engineered the murders, and how, was both foreshadowed and sometimes bluntly clued. But the hints and clues were all there.

What might prove be a problem for some readers is that the who and how, completely depended upon one another here, strongly reminds one of the pulpier miracle crimes imagined by the likes of Fredric Brown and Clayton Rawson. I found this to be slightly disappointing, because I had hoped that the plot, or detective-elements, would emerge from the turmoil of the war story-line as something along the lines of the bloody tour-de-force that was Murder on the Way. I wanted this book to be an all-round masterpiece, but lacked that spark of innovation in the solution to launch the book to the godly heights of the Mount Olympus of Detective-Fiction.

Nevertheless, I don't want to sell I'll Grind Their Bones short and end this blog-post on sour note, because, as a whole, this really is an excellent, but pulpy, detective novel with a prophetic eye on the then coming war. Only problem is that its predecessor cast a shadow of expectation over the plot. So maybe I only have myself to blame for that slight twinge of disappointment, because both books are incomparable.

In closing, Murder on the Way remains my favorite of Roscoe's two locked room novels, but I'll Grind Their Bones has conquered a spot on my list of favorite war-time mysteries, which includes Christianna Brand's Green for Danger (1944), Carter Dickson's Nine-and Death Makes Ten (1940), Michael Gilbert's The Danger Within (1952) and Franklyn Pell's Hangman's Hill (1946; better setting than plot).

So, that's another review I botched in the end. Anway, I'll probably have a lesser-known, but equally, obscure locked room mystery for the next blog-post.
Geplaatst door TomCat on 8/12/2017