John Russell Fearn hardly requires an introduction on this blog, especially after the past year-and-a-half, but for the benefit of the uninitiated I'll very briefly go over his career again.

Fearn was an astonishingly prolific writer of science-fiction, westerns and detective stories, published under a legion of pennames, which largely appeared in such popular periodicals as the Toronto Star Weekly, Astounding Stories and Amazing Stories – marking a British success story in the American pulps. However, he was more than just a remarkably productive writer of magazine stories. 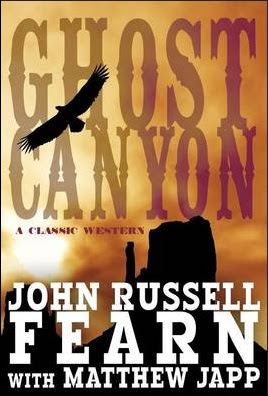 If you look at his bibliography, you'll notice that Fearn churned out full-length novels as fast as his short stories and they practically covered every single form of popular genre-fiction. So far, I primarily looked at his regular detective stories, like Except for One Thing (1947) and Death in Silhouette (1950), but also reviewed a science-fiction novel, The Lonely Astronomer (1954), which transported the classic locked room mystery to the distant, far-flung future. Earlier this year, I discovered Fearn might have done something similar with one of his westerns and thought of it would be a nice followup to my previous review to take a look at a western-style mystery novel.

Ghost Canyon (1950) was originally published under one of Fearn's many pseudonyms, namely "Matt Francis," and was based on a lengthy plot-outline written by a friend, Matthew W. Japp, who was a greengrocer and was decorated World War II veteran – who fought in Normandy, the Netherlands and Germany. Japp also wrote a western solo, titled Jackson's Spread, but the lion's share of his literary endeavors consisted of plotting six westerns for his friend. Ghost Canyon looks to have been their third collaboration and has an impossible disappearance mystery at the heart of the story.

The protagonist of the story is "a saddle tramp," Jerry Carlton, who arrives at a small outpost in Arizona, called Verdure, which has "an oddly deserted aspect" and resembled a ghost town. There were, however, strips of lights visible between the cracks of the wooden shutters that had been placed across every window in town. So there were people living there.

Carlton stops at the gateway of a "solitary wooden dwelling" and is met at the doorway by a woman with a gun, named Hilda Marchland, who lives there with her old father. It's from them that Carlton learns that the town is regularly haunted by the ghosts of four horsemen, "like they came out of the Apocalypse," clad in spectral white and the townsfolk have become too frightened to leave their homes after dark – some are now considering to abandoned the "hag-ridden" town. Even though the town is surrounded by rich, green patches of pastureland. Carlton has done enough riding under a clear sky and in the wind to start believing in spooks.

Hilda is delighted to have finally found someone who shares her skepticism and together they decide to tail the phantom horsemen to see what, and who, are behind the haunting, but they find more than they bargained for.

Each time the horsemen were seen, they rode into Star Canyon and staking out the mouth of the gorge yields immediate result. Carlton and Hilda saw the phantom horsemen appear, "dead in line with each other," slowly riding into the canyon and they followed behind to see where they were heading, but in the narrowest part of the canyon the hoof-prints came to a halt. As if they had ridden into a portal to the Other World! The walls at that point are smooth, and steep, without any rockery niches, acclivities and umarred by a single seam, which appear to be completely immovable "except by blasting" - which had all the potential of a first-class impossible problem. Regrettably, the gentlemen who wrote and plotted this story were not playing entirely fair with their readers. 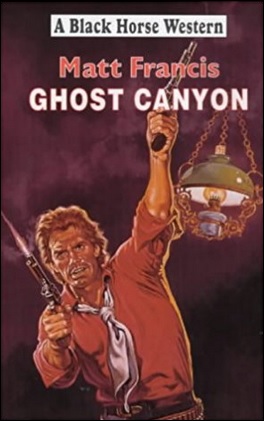 You see, they early one discarded one possibility, a tired old trick, but the ending revealed that this discarded trick is exactly how the ghost-trick was accomplished, but by that time I had already grown fond of my own explanation.

My solution was based around the narrow passage and three hundred feet high walls. I imagined that, on the flattened top of the rocky canyon, a (movable) ramp-lift, like a mine-shaft elevator, stood that could be operated with a hand-winch and the horsemen were simply "air-lifted" out of the narrow passage by an accomplish. On top of the canyon, out of sight of everyone, the horses could be put away for the day in a tiny, makeshift stable. Nobody from the town below would dare to come there anyway. Sadly, the actual answer to the seemingly impossible disappearance of the horsemen turned out to be more prosaic, unfair and very, very dated.

So the only detective-element of any interest proved to be a monumental letdown and the remainder of the story was more reminiscent of a hardboiled western than a cowboy-detective.

For one, there's no real mystery about who's behind the business of the ghostly horsemen. Verdure is under the control, and run, by a small circle of men: Sheriff Harrison (who has an eye on Hilda), Mayor Burridge and the owner of the Black Coyote Saloon, Grant Swainson, who have clear motive for pulling this Scooby Doo stunt. So the primary problem for Carlton is how he has to deal with these men and trying to convince the towns people that they're being frightened out of their property.

A task slightly complicated when the people behind the swindle start murdering people who knew too much. Tragically, one of the victims is Hilda's father, but the villainous sheriff is also shot in the most stereotypical manner imaginable. After the death of Old Man Marchland, Carlton was roughing up the sheriff in the office, promising him he would stop when he starts talking, but a bullet whizzed through the open window to permanently silence him. By the way, it would have made more sense for the murderer to have shot Carlton, because he was physically attacking the sheriff and therefore could be passed off to the people of the town as a justifiable homicide.

So, yeah, the crime-elements are pretty sub-par in Ghost Canyon, but this is slightly made up by the action-scenes towards the end. Such as a very memorable scene when a destructive animal stampede passes through the town. I also snickered at the scene when the murderer is confronted by the angry towns people, ready to lynch him, but tells him he's entitled to stand on his constitutional rights. As to be expected, the people of Verdure were not having any of it.

Well, Ghost Canyon is a very readable and even fun story to read, but the plot is decidedly second-rate and can not be recommended as an example of the western-style detective story like Edward D. Hoch's Ben Snow stories. So I'll probably stick to Fearn's regular detective-fiction for the foreseeable future. Luckily, he wrote enough of those to last me a while.

A Note for the Curious: Fearn's collaborator on this book, Matthew Japp, passed away in January of this year at the grand old age of 102. Only four days short of his 103rd birthday!
Geplaatst door TomCat on 8/27/2017