The Ghost of Athelstan

Last week, I posted a review of Gladys Mitchell's The Devil at Saxon Wall (1935) and was helped in the comment-section by the editor of Sleuth's Alchemy: Cases of Mrs. Bradley and Others (2005), Nick Fuller, with picking my next read in this series by going through the titles residing on my to-be-read pile – starting with a dozen possibilities and ended with two candidates. My choices had boiled down to either The Longer Bodies (1930) and Laurels Are Poison (1942). 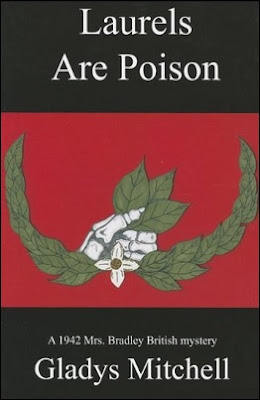 I decided to go with the latter as it was a personal favorite of Mitchell, who drew on her own, "fondly evoked," memories of attending a teacher's trainer college for the story's setting. The result is a mystery novel "filled with high-spirited dialogue" and "camaraderie," written around an unusual plot, which was eerily bizarre and weirdly humorous. And the book introduced several characters who'll make regular appearances in subsequent novels (e.g. The Worsted Viper, 1943). One of them even becomes an occasional stand-in for Mrs. Bradley, but more about that later.

Laurels Are Poison is not an unimportant milepost in the series history and the plot, with some minor qualifications, delivers on the promise made by its reputation.

The story casts Mrs. Bradley, often referred here to as Mrs. Croc, in the role of Warden of Athelstan Hall, Cartaret College, where her presence had been requested by the Principal, Miss Du Mugne, who desired a discreet inquiry from the famous psycho-analyst and criminologist – concerning the disappearance of the previous Warden. Miss Munchan was taken ill at the College End of Term Dance, but not "the slightest trace" has "come to light" of her whereabouts in the ten weeks that have since passed. There's a reason to believe something serious might have happened to the previous Warden.

Miss Munchan had been a biology teacher at Cuddy Bay's County Secondary School for Girls and "a child was killed in the school gymnasium," briefly before she took her leave, but the death was officially ruled to be an accident and the school was exonerated from all blame – which the girl's grandfather refused to accept. And had to be temporarily hospitalized in a mental asylum. Only a month after the inquest the police received a letter, written in Miss Munchan's name, suggesting she wanted to come clean about the death of the girl. However, when the police questioned her she denied all knowledge of the letter and vacated her teaching position.

So Mrs. Bradley has a lead to work on when she arrives at the teacher's training college, but her attention is initially occupied by a rash of jokes, rags and some outright malicious pranks plaguing the college dorms.

During a math lesson, a cabinet in the classroom burst open and "a couple of assorted vipers" spilled out, which created quite a sensation, but the pranks got progressively worst. A bath was allowed to overflow and a thick piece of string had been dangerously stretched across the floor. The clothes of two poor sisters, whose family had sacrificed in order to get them to college, were torn to shreds and the hair of another girl was cut short as she slept. One night, the peace was disturbed by an chilling, unearthly noice, which was ascribed to "the ghost of Athelstan." All of this culminates in the violent death of the college cook, Mrs. Castle, whose lifeless body was dragged by the police from a nearby river.

Mrs. Bradley has a lot to deal with in this case and early on in the book took the new Sub-Warden of Athelstan Hall, Deborah Hall, took into her confidence. She looks favorably upon the young woman, like "a benevolent snake," and plays cupid by engineering a meeting between Deborah and her nephew, Jonathan, who are engaged by the end of the book – who return, as a married couple, in My Father Sleeps (1944), The Croaking Raven (1966) and Lovers, Make Moan (1981). 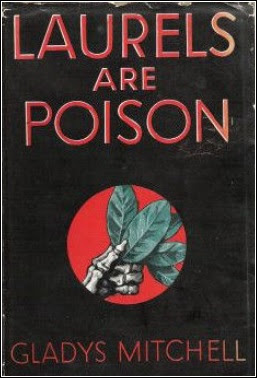 And then there are the three plucky students, Alice Boorman, Kitty Trevelyan and Laura Menzies, who refer to themselves as the Three Musketeers. They would appear together in the previously mentioned The Worsted Viper and Death and the Maiden (1947), but Laura became Mrs. Bradley secretary and reportedly took center-stage in some of the middle-period novels (when Mrs. Bradley became Dame Beatrice). Those three are primarily responsible for the high-spirited, energetic tone of the story and even do some (unintentional) detection (e.g. when they fished the victim's corset from the river). However, their presence also had two noticeable drawbacks.

One of them is that they were, partially, used as a vehicle for Mitchell to indulge in a stroll down memory lane. It's true that the rags and pranks were an important cog in the machine of the plot, but, until the cook was murdered halfway through, the story felt like Mitchell was taking the time to enjoy the setting of the teacher's college. Or to put it more accurately, the plot often felt like it was a pace or two behind the spirited story-telling. Secondly, I knew that Deborah, Laura, Alice and Kitty would become (semi) regular characters in the series and this practically dried up the entire pool of potential suspects. Those girls really usurped the character-department of the book.

So it's to Mitchell's credit that the revelation of the murderer's identity was both memorable and did not disappoint, but, out of necessity, this person had to be mentally unbalanced in order to explain some of the inexplicable actions that drove the plot – such as the whole rigmarole with the college skeleton or throwing the corset into the river. A slightly more sane murderer would probably have acted very differently.

Overall, Laurels Are Poison might not be the best entry in the Mrs. Bradley series, but the story is told with zest and gusto, which served perfectly as an introduction to a host of new characters and a new phase in the series. On top of that, the solution to the case, although not entirely perfect, is memorable and better put together than the explanations found in some of the subsequent novels (e.g. The Rising of the Moon, 1945). So the book did not leave me disappointed.
Geplaatst door TomCat on 8/20/2017