Fire Investigator Nanase was a short-lived manga series, written by Izo Hashimoto and drawn by Tomoshige Ichikawa, which was published in North America by CMX, an imprint of DC Comics, but DC pulled the plug on their CMX brand in 2010 – canceling this series in the process. A series that had been inching ever closer to completion with four, out of seven, volumes published in English and the fifth book was slated for an August, 2010, release. 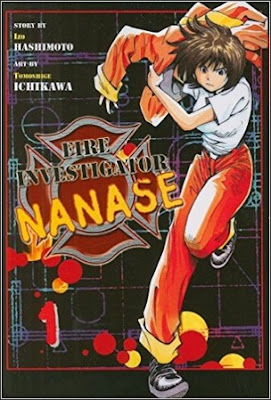 The series is written around the exploits of a firefighter academy student, Nanase Takamine, who has all the potential to become a first-class fire investigator, but she has a pair of pitch-black clouds following her around. One of these clouds contain the dark, torturous memories of the death of her parents, while the other one takes on the form of a personal nemesis and a very unlikely ally.

Several years before the series begins, a rookie Nanase rescued a man from a burning building. However, this man turned out to be an arsonist, a serial fire-starter known as Firebug, who may have had a hand in the fire that killed her parents, but ever-since the arsonist has been helping her solve fire-related crimes – which makes for an uneasy alliance.

You can compare their relationship with that of Clarice Starling and Dr. Hannibal Lecter from Thomas Harris' The Silence of the Lambs (1988). Only difference is that Firebug, unlike Lecter, is walking around freely with a Zippo lighter in his pocket. And this relation has a more personal element to it.

Nanase also has to contend with her direct superior, Chief Fire Investigator Tachibana, who waves Nanase's successes away as merely "beginner's luck" and there's an arson investigator, Shusaku Ogata, obsessed with capturing Firebug and he's particularly interested in Nanase – because she's the only one who saw his face. He even entertains the idea that Nanase might possibly be an accomplish of Firebug. Finally, there's a small boy, Shingo, who became an orphan when his father, a rescue worker, died in a fire. Nanase saved him from an orphanage by adopting him.

Admittedly, this series is not as well written, or plotted, as Detective Conan nor has it the same quality of art-work as The Kindaichi Case Files. It's pretty much the comic book equivalent of a trashy pulp magazine with fanservice. So why, you ask, bring up an obscure, pulp-style manga series that has already been forgotten by most of the world?

The story opens with Nanase and Shingo walking home, after "dining" out at a street-corner noodle stand, when they're nearly run over by a speeding car. As they stand at the side of the road, yelling at the disappearing taillights, they notice smoke coming from one of the top-floor apartments of a tall building and the subsequent panels show a heroic attempt to rescue anyone who might be trapped inside, but Nanase's help came too late for the owner, 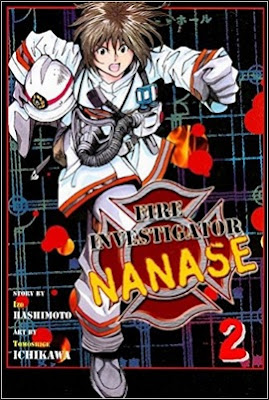 The story begins when Nanase and Shingo are walking home, after having "dined" out at a noodle stand in the street, when they're nearly run over by a speeding car.

As they stand at the side of the road, yelling at the vanishing tail-lights, they notice smoke coming from the top-floor of a tall apartment building and the subsequent panels show Nanase making an heroic attempt to rescue anyone who might have been trapped inside, but her help came to late for Takako Saegusa – president of an architectural design company. She had been celebrating her birthday earlier that evening, but now her charred remains lay in a blackened room that had been secured on all sides from the inside. The door was locked and chained. The windows were sealed shut and there were "no signs of any suspicious activity."

Nevertheless, Nanase has, much to the annoyance of Chief Tachibana, doubts about the origin of the fire. Why was the table with presents set up next to the window and not in a more conspicuous place? Why was the obese victim, who's on a diet, given a large birthday cake by her thoughtless secretary? But, before unraveling the locked room arson case, she's caught in a cross-fire confrontation between Firebug and Ogata. A fiery confrontation that actually features a flame-thrower hidden inside a sleeve of a dress shirt! I kid you not.

The absolute highlight of this pulpy story is the explanation of how the murderer set the locked apartment on fire. A solution combining a prop of the stage magician with a small piece of modern technology, which, by themselves are harmless, but when combined can penetrate a locked apartment and set it ablaze – turning it into the threshold of hell. A surprisingly clever, high-quality trick in a series of mostly second-rate plots and thriller-ish, fire-related material. Like the far less interesting stories that bookend "Petals of Envy" in this volume.

Honestly, this locked room trick deserves to be part of a better, more well-known, detective series. It's criminal that it's tucked away on the pages of an obscure, all but forgotten, series that nobody will look at in another ten or twenty years.

So, if you happen to be a collector, or simply a wholesale reader, of impossible crime fiction, you might want to snatch up a copy of this volume for your personal locked room library while they're still (cheaply) available. The locked room trick is really worth it and would like to hear someone else's opinion on it.

My next review will take a look at another contemporary locked room mystery that, hopefully, will turn out to be a good one, but I have this nagging feeling it might not be all that great. So I'll see you all on the flipside.
Geplaatst door TomCat on 3/02/2018