Christopher Bush was "a supreme alibi artisan" and was "to the unbreakable alibi what John Dickson Carr was to the impossible crime."

A claim he cemented with two classic detective novels, Cut Throat (1932) and The Case of the Missing Minutes (1936), crafted around ingenious, clockwork-like plots cunningly manipulating the perception of time – which is helping with turning Bush into a personal favorite. I assume The Case of the 100% Alibis (1934) is one of his lesser-known, alibi-oriented mysteries, but the story could not have made "his fascination with the alibi problem any clearer." As well as showing flashes of that Carrian ingenuity that was on full display in The Case of the Chinese Gong (1935).

The Case of the 100% Alibis opens with a short prologue, titled "For the Ingenious Reader," which could have been written by Dr. Gideon Fell.

A prologue purporting to explain to the reader the apparent contradiction of a solved murder case that was littered with one-hundred percent, cast-iron alibis, because "such an alibi admits of no loopholes." After all, even "the law cannot move the unmovable" or "break an unbreakable alibi," but the murderer was apprehended and the prologue gives two reasons why this person was discovered: Mrs. Hubbard's prize-winning cake recipe and Captain Moile's first attempt to fly the Atlantic solo – neither appear to have any relevance whatsoever to the story.

So the prologue was as elucidating as the cryptic remarks of detective characters, like Dr. Fell, when they begin to mumble about the significance of the untouched sandwich on the secretary's desk or the sawdust found underneath the bookcase. Anyway...

This time, the clockwork-like plot of this eleventh title is set in motion by three telephone calls made shortly before and after the murder. And these phone calls complicate the case almost as much as the parade of unbreakable alibis flaunting the detectives as they pass them by.

During the first phone call, Frederick Lewton had rang up an acquaintance, Mr. Beece, in "a normal voice mentioning some tolerably unimportant meeting," but five minutes later rings Dr. Rule, "scared stiff," urging her to ask her husband, Dr. Rule, to come and see him immediately – followed only three minutes later by a phone call to the local police station. A voice identifying himself as Lewton's manservant, Robert Trench, tells the policeman on duty that he found the body of his master when he got back home. Someone had stabbed him to death.

Superintendent George "The General" Wharton of Scotland Yard happened to be in the coastal town of Seaborough, which was also the setting of The Case of the Chinese Gong, who lends a hand to Chief Constable Tempest. On a side-note, Wharton is here accompanied by his wife, Jane Wharton, who shines in her supporting role.

Wharton and Tempest hunt down every possible lead and clue with the dogged determination of a bulldog, but problems and complications quickly pile up all around them.


Trench appeared on the scene after the police had discovered the body and swears he never reported a murder to them. The murder weapon was found stuffed up the chimney and a safe had been rifled. An innocent looking note has a cryptic line scribbled on the bottom right-hand corner, "little fish may be sweet, but what about this for a middle cut of salmon," followed by "R.C. 105" and "B.C. 33" in the bottom left corner – a clue connected to a thread of blackmail. But it gets more entangled. One of the suspects is an actor, who could have mimicked one or two the voices on the telephone, while another suspect is a lauded mystery novelist. Someone who knows his way around an alibi. And that's the unmovable wall Wharton bumps into. Every single suspect is in possession of "the most beautiful twenty-two carat, diamond-studded alibi." 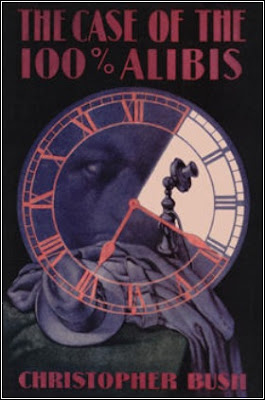 Around the halfway mark, Ludovic Travers arrives on the scene to save the day. Or, as Wharton cynically observes, "to poke his nose in." Honestly, Wharton has a point.

During the first half, Wharton showed he can carry a story and it was a pleasure to see him at work as he used different tactics and approaches to get information. Such as in the way he approached witnesses and assumed a personality that would get the most results, but also takes the time to ponder and tabulate all of the evidence and information – which should have brought him the solution. Travers only really becomes a functioning presence in the story towards the end. So, in my humble opinion, The Case of the 100% Alibis should have been written as a solo outing for the superintendent. He could then have bragged to Travers that he once gutted one of those clockwork alibis of its wheels, cogs and springs without his help.

However, you can only think of that as a missed opportunity, not a flaw, but the one thing that can be said against the plot was cleverly acknowledged and lampshaded by Bush.

Travers asks the suspected detective novelist, Raymond Rennyet, what he considers to be "the first essential" of a plot. Rennyet answer is that if you give him "a perfectly good faked alibi" he'll write "a murder story—of sorts—around it." And that's probably what happened here. I think the story and characters was written around the alibi-trick and this is probably why, in spite of a pack of alibis, the plot felt rather slight when compared with earlier titles like Dancing Death (1931) and The Case of the April Fools (1933).

Regardless, The Case of the 100% Alibis presents a cleverly constructed, minutely-timed plot with pleasant, solid police work that should not fail to entertain the puzzle-oriented mystery reader, but stands a step or two below Cut Throat and The Case of the Missing Minutes – which are admittedly two hard-to-top classics of the unbreakable alibi. So this one comes still very much recommended as a good example of the traditional, plot-driven mystery novel from the genre's Golden Age.

On a final note, my next Bush is (finally) going to be much recommended Dead Man Twice (1930), but it's not going to be my next read. That's going to be a three-way toss-up between Case Closed, John Russell Fearn and E.R. Punshon.
Geplaatst door TomCat on 3/25/2018