The Golden Dagger (1951) is E.R. Punshon's twenty-ninth title about his longtime series detective, Bobby Owen, who started out as a police constable (Information Received, 1933) and climbed to the rank of Commander, which is a position he held during the last period of the series – beginning with So Many Doors (1949) and ending with the wonderfully introspective Six Were Present (1956). This story is part of that last stretch in the series and sees Owen doing more, as a Commander of Police, than his rank would probably allow him to do outside of the printed page.

The story opens with Commander Bobby Owen sitting in his office, "almost as busy indeed as bored," as he sifts through the daily accumulation of paperwork and reports on his desk. A dull routine of bureaucratic procedure disrupted by the arrival of Detective Constable Ford.

An anonymous phone message was received from a call-box in Lower High Hill, reporting a murder at a place called Cobblers, which is the home of Lord Rone, who possesses one of "the finest art collections in the world" and lately has been filling the pages of the Daily Trumpeter – who insist on labeling him an "Export Dictator." A followup report brought to Owen's desk informs him that a constable has found fancy-handled, ornamental dagger in the call-box with bloodstains on the blade. The handle of the dagger was in the shape of "a nude woman in ivory and gold," a 16th century piece of metal work by Benvenuto Cellini, which has "a smile of evil, secret joy." Obviously, a fine piece of art like that could have only come from the collection of Lord Rone.

As noted above, The Golden Dagger was published during the twilight years of the series, when Punshon was 79 or 80, but the intricacies of the multi-layered, maze-like plot showcase the same vitality that can be found in his earlier novels. One of the puzzling, intricate problems of the plot is the apparent lack of a murder victim.

Nobody appears to have actually died in Lower High Hill, let alone murdered with an ornamental dagger, but there are two men with (tangential) ties to Cobblers who have gone missing.

The first of these two men is a writer of popular romantic "slush," calling himself "Tudor King," but he shuns the public and publicity like a leper, which only enlarged his popularity as a novelist and this vexed his secretary/housekeeper, Charlotte Cato – an "extremely realistic novelist of former days" who never achieved the commercial success of her current employer. Sour grapes, spiked with envy, can be a motive for murder. The second person missing from the scene is Baldwin Jones, who had been brought to Cobblers by the brash, outspoken daughter of Lord Rone, Miss Maureen Carton, but she send him packing with a black eye when he tried to kiss her.

However, one of Maureen's admirers, Jack Longton, insists it was him who gave Jones a shiner and this lead is further complicated by the fact that Jones turns out to be a petty, two-bit blackmailer. And there are more people who could be involved in this possible murder case. Most of them are staying at Cobblers as either guests or employees of Lord Rone.

Richard Moyse is hoping to the secure the vacant position of personal secretary and Lord Rone suggested he stayed a day, or two, with him so that he can consider him for the post and Moyse conveniently saved Lord Rone – when a man snatched his dispatch case and threw him in front of car. Moyse not only stopped the car, but was able to retrieve the stolen dispatch case. The second person is a young art critic, Norman Oxendale, who asked permission to stay at Cobblers to inspect the famous pictures and miniatures. Or is there an ulterior motive for his visit? After all, there had been previous attempt at theft and someone had succeeded in taking the Cellini dagger from the Long Gallery. 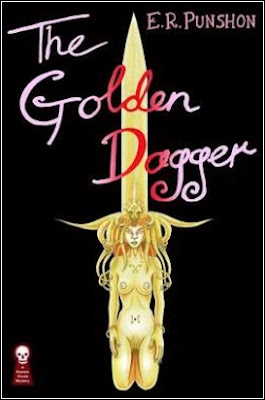 Finally, there's one of "the best-known historians and archaeologists in the country," Sir William Watson, who doubles as a doormat for his wife, Lady Watson, who likes male lap-dogs and lately she had her eyes Oxendale – after Jones had disappeared from the stage. Add to all of that "a very illusive kind of clue," namely a journeying black Homburg hat, burned letters and a body found in a haunted forest and you got yourself a late, but fairly typical, Punshon-style detective novel.

As you would expect from Punshon, even at this stage in his life, he works, pulls and manipulates the strings of all these plot-threads with the nimble fingers of a practiced puppeteer. However, it must be said that the plot-complexity here comes mainly from pulling all of the plot-threads together, because, taken by themselves, they tended to be rather simple. You can especially see this weakness in the murder that's at the heart of the plot, which turned out to be as simple as it was sordid, but the numerous plot-threads that were tied around it completely obfuscated the simplistic solution – which was also done by the meddling behavior of one particular character.

This helped obscure the fact that the murderer's identity was weakly clued, which Owen's admitted at the end when he said that the clues, while present, were very small. So small that the case, officially, ended with a verdict of murder against "person or persons unknown." We know who the murderer's identity and motive, but Owen lacked the conclusive evidence to file the case away as solved.

Nevertheless, while arguably not the best or strongest entry in the Bobby Owen series, The Golden Dagger is still a pleasantly busy, fairly clever detective novel that will please loyal, long-time readers of Punshon.

So the plot, while not perfect, was far from a crushing disappointment, but there was another aspect of the story that depressed me and relates to the depiction of the bleak, depressing state of post-World War II Britain – which strongly reminded me of Cyril Hare's When the Wind Blows (1949) and Leo Bruce's Cold Blood (1952).

There several references to taxes, like a super tax, which is supposed to leave nobody with more than six thousand pounds a year and this made it very difficult, if not impossible, to maintain a large, fully staffed estate. It's even mentioned that, by then, the attire of an old-fashioned housemaid "considered rather worse than the wearing of handcuffs and leg-irons." Or how, years after the war ended, rationing is still going on and the reader is treated to a brief scene in which Owen eats his share of "the week's bacon ration." These references, littered throughout the story, gives the book a slight hint of gloom and doom, because you realize that an era had definitively ended. An era in which our beloved mystery writers and detective characters had thrived.

I suppose that's something that will always cast a gloomy, depressing pall over these British mysteries from the 1950s. Anyway, I'll try to picking uplifting for my next read. Probably Case Closed. A series that has never failed to lift my spirits. So stay tuned!
Geplaatst door TomCat on 3/29/2018