A Brush with Rembrandt: Q.E.D. vol. 13 by Motohiro Katou

So it's been a little over a month since my previous review of Motohiro Katou's Q.E.D. vol. 12 and therefore about time to do another one, which brings me to the relatively minor, but fun, volume 13 comprising of two stories perched on two pillars of civilization – namely art and architecture. The first of these stories, entitled "Calamity Man," hearkens back to "1th, April, 1999" from vol. 4 with a plot constructed around an April Fools Day Challenge. But this time, the stakes were much higher! 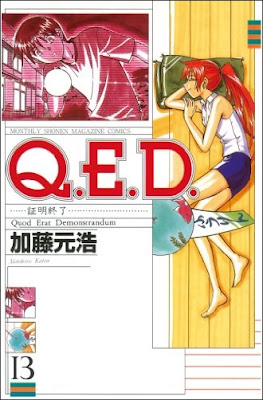 Alan Blade is the trillionaire (in Japanese yen) president of Alansoft and his company has developed an OS, Wings2001, which has been "installed on more than 90% of the world's computers," but recently, the quality of his recent employees has gone done. Have they made computers too easy to use and lowered the threshold? So he comes up with a very expensive, tricky plan that involves the teenage genius and high-school detective, Sou Touma.

Eight years ago, Touma was only 9-year-old child prodigy living in the United States and helped out Blade when he started his company from a garage. Touma actually had a part in helping to complete their first OS that "conquered the world." Naturally, he was asked to come work for them after he graduated, but Touma left America without a word to his fellow student (see "Breakthrough" from vol. 3). So now Blade has come to Japan to force Touma to partake into a high-stakes, April Fools Day Challenge and, if he wins, Touma has to come back with him to America to work at his company – renouncing his Japanese citizenship in the process. By the way, Touma holds dual nationality of the United States and Japan. Story mentions Touma has to pick between them when he turns 18.

Although what the challenge, exactly, entails is a little nebulous, but Blade has purchased a luxury cruise ship and turned it into a floating art exhibition of Rembrandt painting. Something a Dutch representative of the Netherlands Rembrandt Art Association "extremely disgraceful" and suspects one "particular piece might even be stolen." Touma's plucky friend, Kana Mizuhara, suggests they steal the painting, but Touma points out "stealing an expensive item like this is not a joke." What else could the challenge entail?

I suspected the direction the story was going to take the moment I read the name of the ship, which suggested two ways in which Touma could outsmart Blade with his dodgy art collection.

Nonetheless, it was a decent and fun enough story that (once more) demonstrated how much Q.E.D. differs from other anime-and manga detective series. Not merely in the very different type of detective stories you can only find in Q.E.D. (e.g. "Serial John Doe" from vol. 7), but it's also the only one with a distinctly international flavor. There have been some foreign excursions or non-Japanese characters in Detective Conan and The Kindaichi Case Files, but here it's part of the DNA of the series.

The second story, "Klein Tower," is more in line with your regular anime-and manga detective stories. Sou Touma and Kana Mizuhara are asked to lend a helping hand to the university's overburdened research department in photographing and gathering background on a historical structure – ominously called the Tower of Hell. A so-called Sazae Tower with "a double helix pathway" so "there's a single path that leads both in and out," which means "you can go around each floor of a 3 story building in a direct path." The Tower of Hell was built at the beginning of the Showa Era and the builder made it as his personal pathway to paradise. One day, he disappeared inside the tower without a trace and reappeared a year later, as a skeleton, on the top floor of the tower. A historical locked room mystery! 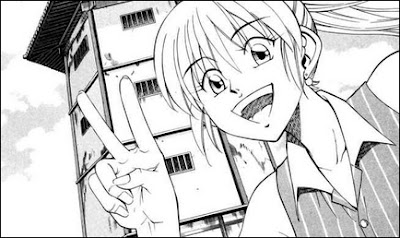 Ever since, the tower has been known as an entrance to the underworld, but, over the decades, the village where the tower stands has become "more and more lonely." So the village headman came up with a village revitalization project with the mysterious tower as a marketing ploy. There are, however, some financial hurdles to clear which makes it cheaper to dismantle the tower and rebuild it somewhere else in the village. But they had to know if that's even possible. So the university came to investigate with our two detectives doing the preliminary groundwork.

However, they soon have another task at hand as the current owner and the now very elder daughter of the builder, Umehara Rin, briefly disappears and is found dangling from a rope inside the tower. But it was neither suicide or a locked room murder. The old locked room-trick from the past was used in the present to create an air-tight alibi complete with a timetable. Very clever! But the story has one short coming.

I've had probably a little more exposure to the Japanese detective story than most of my fellow mystery aficionados, but can tell you Soji Shimada's Naname yashiki no hanzai (Murder in the Crooked House, 1982) is par for the course where bizarre and unusual architecture is concerned. Japanese mystery writers have used the corpse-puzzle and unorthodox architecture to completely revitalize the impossible crime and unbreakable alibi tropes. They added a whole bunch of new tricks and possibilities to the genre. So it's always exciting when a Japanese detective story has a building with peculiar features as it's setting, but the alibi/locked room-trick was surprisingly basic and simple. Everything fitted together nicely and liked the explanation to the historical mystery, but nothing outstanding or particular memorable. Something more could have been done with the setting.

So, all in all, a fairly average volume with two good, solid enough stories and, while not standouts in the series, together they were miles ahead of the disappointing stories that made up the previous volume. Things are looking up again!