Back in January, I reviewed volume 4 from Motohiro Katou's Q.E.D. series and alluded to my intention to reach volume 10 before the end of the year, but we are nearing the halfway mark of 2020 and have only read two further volumes – discussed here and here. So I decided to speed things up a little bit with this twofer review of volumes 7 and 8. 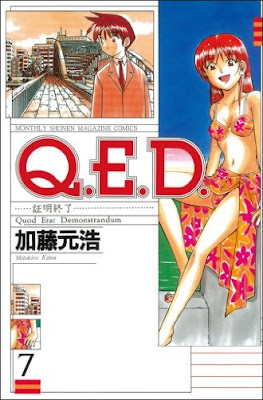 The story opening volume 7, entitled "Serial John Doe," is one of the longest, most ambitiously written and complexly constructed stories in the series with a subversive play on the denouement. Some would probably call it an anti-detective story.

Sou Touma hardly needs an introduction at this point, but the plot of "Serial John Doe" makes it necessary to point out that Touma, a young genius, is an MIT graduate who moved back to Japan to live as an ordinary high-school student. Touma's day as an MIT student tend to come back to him, as seen in volume 2, which introduced one of his American friends, Syd "Loki" Green. Once again, Loki returns with some unsettling news. Someone has cleverly murdered the aces of the MIT departments of genetic technology and aerospace engineering.

The first victim, Kamenev, attended a lecture on quantum mechanics at the University of Moscow and was found dead the following day in a forest, more than 30 km from the city, but to get him "drunk and freeze to death" you would have needed "all the vodka in Moscow" – traces of a sleeping drug and a missing car confirmed there was more to the case. The second victim was the ace of the aerospace department, Liu Shen Chi, whose decayed body was found floating in a derelict boat off the coast of Macao, China. Liu had been poisoned with uranium and "a calculation ruler from old times," used to calculate logarithms, was found by the corpse.

Loki considers the possibility that more aces in other fields of study will also become victims and Touma, a former ace of the mathematics department, is very likely on the killer's list. So he asks Kana Mizuhara to keep an eye on Touma, but this weird story becomes impossible to describe any further. Needless to say, there are more murders, an attempt to kill Touma and a complex code with philosophical underpinnings, but, essentially, the story is a pure whydunit with the motive superseding the identity of the globetrotting serial killer. I still don't know whether, or not, I like the ending, but it certainly was something entirely different.

The second story, "A Melancholy Afternoon," is much shorter and simpler in nature, but with a good, solid plot and a warm, human touch to the characterization of the suspects.

On a lazy, Saturday afternoon, Touma and Mizuhara enter a floral shop on a whim and are immediately detained, because they were two of the six people in the shop when a sum of money went missing from owner's private office. The shop owner, Okuda Kousuke, had withdrawn a hundred 10,000 yen bills, one million yen in total, that morning from the bank to cover operational costs and paying wages, but left the envelope on the desk of his office – since the "room is like a safe" with the only window locked and equipped with a burglar alarm. And the only door was under constant observation of the three employees. There's a full-time employee, Ooshima Keiko, assisted by two students working part-time, Gotou Toshio and Watanabe Miyuki. But when the salaries were deducted, Kousuke discovered that he was 50,000 yen short. Someone had taken a pretty packet of money from the envelope! And there were only a handful of people who could have taken it. 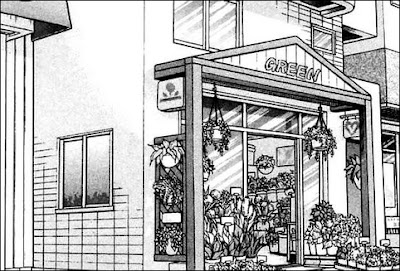 Kousuke told the police that all three of his employees "wanted part of their wages to be paid up front this month," but the reason why they needed money is devoid of the usual selfish greed and gives the story a memorable ending when Touma finally decides to intervene. Touma does more than merely solving the crime. He fixes the problems of the people who work there and ensures the culprit is not punished, but, in order to do that, he has to explain how the money disappeared when everyone in the shop had an alibi. A clever trick, to be sure.

"A Melancholy Afternoon" is one of those rare examples of a high quality filler story and a good yarn to end this volume with! So, all in all, a slightly unusual, but good, entries in this often unconventional series. Recommended! 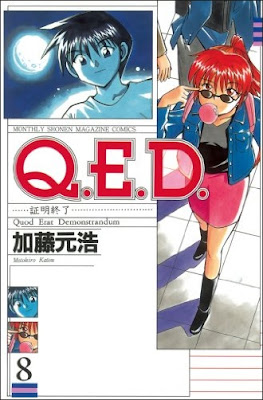 The first story of volume 8, "Falling Down," brings Touma and Mizuhara to Otowa Village, where they intended to bungee jump from a bridge, but the facility has been temporarily closed down when the instructor of the local fire-fighting academy, Oosawa Kunio, died there under mysterious circumstances – falling to his death from the bridge. An accident seemed unlikely and there was no motive for suicide. So everyone in the village suspected the universally respected firefighter had been pushed to his death. There is, however, one problem: only one person had a possible motive to murder the instructor, Hayami, a rookie firefighter who wanted to follow in the footsteps of his father. A firefighter who died in the line of duty when he saved a child from a burning building, but the instructor had kicked him out of the academy.

You see, Hayami is "dreadfully afraid of heights" and "couldn't even bring himself to cross the bridge." On top of that, Hayami has an alibi for the time of the murder. So, if he did it, how did he manage to toss a strong, sturdy and experienced firefighter from a bridge he didn't even dare to cross?

So another one of those quasi-impossible crime stories with a highly unconventional, but original, alibi-trick only marred by the lack of clueing. Nevertheless, the trick is a good example of the ingenuity found in these shin honkaku detective stories.

The second and last story of volume 8, "School Festival Melody Mania," begins on the eve of the school festival and the students of the various school clubs stay behind at school to prepare the various stages and a haunted room – including Touma and Mizuhara. On the following day, they discover that most of the stages have been wrecked during a blackout that occurred the previous night. The security guard swore that, other than the students who stayed the night, nobody else went into the stage area. So the culprits have to be among them. However, a time table clearly shows that "every club who had a motive has an alibi."

Once again, Touma has to reluctantly play the role of high-school detective and, one by one, collapses all of the alibis and the solution turns out to be a tricky, but amusing, play on a very well-known detective novel. A second thing worth mentioning is the character development of Touma, a typical lone wolf, who suddenly finds that "the world is slowly, bit by bit, becoming integrated" with himself and he's actually began to interact with the people around him. Something he's not used to and "it just feels weird." And he didn't like it either when a member of the music club was performing his mating rituals around Mizuhara.

So, on a whole, these two volumes weren't quite as strong as the stories collected in volume 5 and 6, but they were still pretty good full with good and experimental ideas, clear continuity, original tricks, great settings and better characterizations than usually found in these anime-and manga detective series – which are usually very plot-driven series. This is makes Q.E.D. such a strange, but fascinating, detective series to explore. So you can expect another twofer review of volumes 9 and 10 in the comings weeks.
Geplaatst door TomCat on 5/18/2020