The 73rd volume of Gosho Aoyama's long-running Case Closed series, published in Japan and elsewhere as Detective Conan, begins with the two concluding chapters of the fascinating story that ended the previous volume, "The Blade of the Keeper of Time" – a clock-themed impossible crime in the spirit of John Dickson Carr and John Rhode. A seemingly impossible murder announced in a letter that was signed "The Guardian of Time." 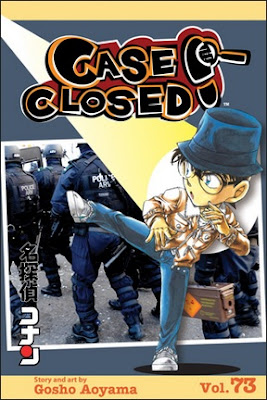 Rukako Hoshina is a wealthy family matriarch with an obsession for clocks, but every year, she receives a threatening letter accusing her of disrespecting "the flow of time" and foretells she'll fall to "a shapeless sword" at the time she came into the world. So she hired the well-known sleeping detective, Richard Moore, who's accompanied by Conan and Rachel to the Western-style clock mansion of his client. Unfortunately, they're unable to prevent the murderer from striking down Moore's client.

Just as she blew out the candles on her birthday cake, the lights went out and Rukako Hoshina was stabbed in the chest. When the lights came back on, the murderer appeared to have disappeared through the open door of the balcony, but it had been raining until early in the evening and the ground below was muddy – unmarked by any footprints. So the killer hasn't left the house, but the spray pattern showed the culprit had to be "doused in blood." Nobody had enough blood on them to have delivered the fatal blow. And what happened to the murder weapon?

There are many cogs and wheels moving to make this locked room-trick work, which makes it workmanlike rather than inspired, but what makes the story brilliant is the nature of the shapeless sword, why the murderer didn't get spattered with blood and the "strange description" of the culprit who brushed against several people when the lights went out. A description suggesting "a large, fat, fast-moving woman in a dress." So, on a whole, a very satisfying detective story.

The second story has a familiar premise, a poisoning at a restaurant, which has become one of the specialties of the house in this series, but, more interestingly, it leaves Conan alone with Moore – who rarely, if ever, tackle a case without Rachel being there. Rachel is staying at school overnight to practice with her classmates for the big karate tournament and this means he has to Conan out to have dinner, but Coffee Poirot is closed and they end up at a grimy, rundown noodle shack with "ramen to die for." And the ramen proved to be absolutely delicious! 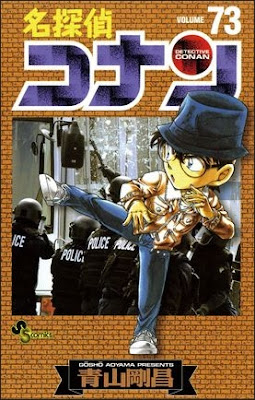 Conan and Moore learn that the owner is feuding with an unscrupulous real estate developer, Tokumori Saizu, who has been trying to buy out all the stores on the block to make place for a shopping mall. Saizu doesn't shun rough, underhanded tactics to get his way. So when he drops dead in the restaurant, of cyanide poisoning, everyone present has a rock solid motive, but how did the murderer administer this very dangerous poison?

Aoyama is one of the most versatile plotters of our time, who can turn his hand to any kind of chicanery, but, when it comes to doling out poison, he's the uncrowned king of poisoning tricks – even better than either Agatha Christie or Paul Doherty. For example, the ingenious method employed, in volume 15, to poison a loan shark or the murder, in volume 63, at a sushi bar where plates of food can be taken randomly from a conveyor belt. Yes, here too, Aoyama came up with another deceivingly simplistic method to transfer a deadly amount of poison to the victim without him being aware of it. As if the murderer "was pulling his strings from the moment he walked in," but it always makes me a little antsy to see how cyanide is being handled in these stories. Nevertheless, a solid story with a very well done setting and trick.

The third story introduces a new character, Masumi Sera, who's a self-proclaimed high school detective ("a girl Kudo") and recently transferred into Rachel and Serena's class, but she seems very interested in Conan. She becomes involved in a case with him when they're both present when a phone scammer apparently jumped to his death. Conan and Sera astutely deduce that the scammer was cleverly murdered, however, picking apart the carefully planned and executed trick takes some time and ingenuity. Conan has to phone in his part of the solution with his Jimmy Kudo voice. A good introduction to a new character with a trick that used an cast-iron alibi to create an impossible crime.

The premise of the last story immediately reminded me of Ed McBain's Killer's Wedge (1959) with the grieving brother of a dead mystery writer strapping explosives to his chest and taking Richard Moore, Rachel, Sera and three other people hostage at his office – demanding that the famous "Sleeping Moore" solves the murder of his sister. Miku Sawaguri has become one of the youngest, bestselling mystery novelists in Japan, but she apparently committed suicide at a hot spring, inside a locked room, by slitting her wrists. Something her brother refuses to accept and believes that one of the three women, all aspiring mystery writers, who went with her to hot springs murdered her. So, once again, Conan has to assume his old identity over the phone to help Moore identify the murderer. And, hopefully, prevent a bloodbath. This story will be concluded in the next volume. 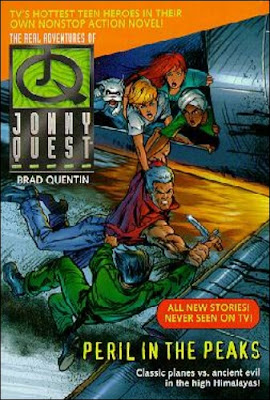 So, all in all, volume 73 was one of the strongest volumes, in a while, full of clever tricks, good settings (ramen shop) and the introduction of new recurring character with ambiguous intentions. A fine example of why Case Closed is the greatest detective story of our time and criminally ignored by Western mystery readers.

But wait, there's more! In my previous blog-post, I reviewed Michael Dahl's second Finnegan Zwake archaeological mystery novel, The Worm Tunnel (1999), which is a series I described as a cross between Case Closed and the 1990s cartoon-series, The Real Adventures of Jonny Quest. Something unexpectedly came my way that was perfect to tack on to this review.

During the mid-to late 1990s, HarperCollins published eleven TV tie-in novels of The Real Adventures of Jonny Quest, written by Brad Quentin, but calling them novels is being generous, because my edition of Peril in the Peaks (1996) only has 110 pages in large print – which probably means you could reissue the entire series as one, or two, short story collections. The Quest Team travel to the remote Tibetan mountains where an ancient ghost plane has been spotted and cargo planes disappear without a trace in place called Cloud Alley. Soon they're embroiled with cloud surfing sky pirates and have to cross swords with the dictator of long-lost valley, named Sharma-La, where people have lived under the cover of a mysterious and magical blanket of clouds for more than fifty years. The people believe the clouds protect their spiritual leader, The Little Lama, who hasn't aged for the better part of a century!

So there's more than enough to do for the Quest Team and Quentin packed those scant, 110-pages with a ton of adventurous scenes and exciting developments, which made for an entertaining, fast-paced read, but the only real reason to pick up one of these tie-in stories is nostalgia and nothing else. If you're feeling nostalgic, Peril in the Peaks will give you a fun hour of childhood escapism.
Geplaatst door TomCat on 5/28/2020