Addison Simmons was an American writers described by our resident genre-historian, Curt Evans, as "a prolific professional writer of both short stories and radio plays" who produced two detective novels, Death on the Campus (1935) and Dead Weight (1946), which had been withering away in obscurity – until Coachwhip Publications decided to reissue them in 2018. And, as to be expected, Evans penned an excellent introduction to those brand new editions. 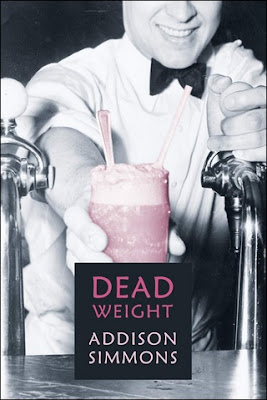 Years ago, I came across a short reference to Dead Weight in The Anthony Boucher Chronicles: Reviews and Commentary, 1942-47 (2009), praising the book as a small town mystery with "quite a bit of ingenuity," which earned it a notation on my wishlist.

Needless to say, I was glad to see this little-known novel returning to print, but the due to the deluge of reprints, translations and my crippling impossible crime addiction, it took me more than a year to get to it. So my only regret is that I didn't read it sooner. What an enjoyable and interesting little piece of detective fiction!

Dead Weight centers on the creators of "a nice quiet little radio serial," Ed MacIntyre and Walt Tuttle, who formed "a perfect combination" with Walt cobbling together the plots and Ed writing the dialogue, but Home Town became "the top ranking serial on the air" – playing havoc on Ed's digestive system and nerves. For years, Ed and Walt have been battling their sponsor, Slade Lattimer, who's "one of the wealthiest men in the country" with the habit of treating his employees as stooges who have "to be beaten into line." And every single day, for two years, Lattimer interfered with the scrips and direction of the show. So when an opportunity presented itself to get out, Ed and Walt eagerly grabbed it.

Walt returned to his old home town, Hamsted, where he bought a drug story that came with two full-time registered pharmacists, a store manager and a girl at the soda fountain. Only thing they have to do is learn how to sell the patent medicines, candy and hardware, which will land them a comfy 75 bucks a week!

Shortly after they arrived, Ed discovers Walt's slumped body in one of the ice cream booths at the pharmacy, clutching a torn piece of paper, with an overturned glass of strawberry soda next to him. Someone had shot him! Curiously, on the night of the murder, there were several people from their Chicago past in town. One of them was their old radio-executive, Harry Leibowitz, but also the hotblooded, short-tempered daughter of their former sponsor, Sandra Lattimer, who's passionately in love with Walt and nearly killed him back in Chicago – when she confronted him with a loaded gun. There are also potential suspects closer to home who warrant some consideration. Such as the strawberry soda guzzling village idiot, "Dodo," who's holding something back and the "tight and bitter" Forsythe family. Years ago, 19-year-old Calla Forsythe was murdered and her body dumped in Hamsted Wood, but the murderer was never caught and Ed discovers Walt used the case as a story-line in Home Town. 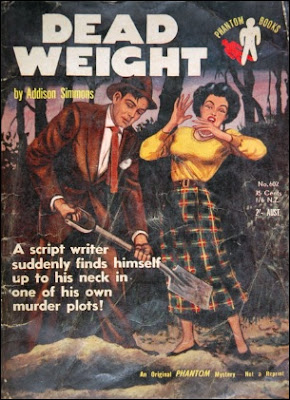 So, together with his wife, Binnie, Ed decides to get to the bottom of this business, but that's easier said than done when you're dealing with a missing dying message, lying witnesses, hostile suspects and a growing bodycount.

There aren't any references in Dead Weight to other mystery writers, or detective characters, but the plotting and writing suggests Simmons admired Ellery Queen and Craig Rice. Dead Weight has the type of characters and background recalling Queen's Hollywood and Wrightsville novels, but, as Evans described it, "baroque in plot" reminiscent of the earlier, more puzzle-driven, Queen novels. I think the presence of a dying message was the clearest evidence Simmons aligned himself with Queen, but Dead Weight also has a dreamy, slightly surrealistic quality. Ed has some very strange dreams, "like Alice Through the Looking Glass," which actually help him get closer to the solution. Something that reminded me of the often dreamlike detective stories by Rice. Another mystery writer who also greatly admired Queen.

But how well was this Queen-Rice style detective executed in the hands of Simmons? As usually, Anthony Boucher was right when he wrote that Dead Weight has plenty of ingenuity, but this doesn't come into play until the final quarter of the book when the dying message turns up and an alibi-trick came into play – skillfully blindsiding this unsuspecting armchair detective. So I was very pleased with how the story and plot developed and turned out.

Dead Weight is not a shimmering, long-lost classic of the Golden Age detective story, but it's a tremendously enjoyable, well written and handily plotted novel with good ideas, memorable scenes and served with a slice of small town Americana. A fine example of "the entertaining legacy" left behind by those "young detective fiction enthusiasts of eighty and ninety years ago." Recommended, especially if you have a special fondness for the classic American detective stories of writers like Queen and Rice.
Geplaatst door TomCat on 5/30/2020