I can't remember where I read this, or who said it, but someone once posited that if the dead who had been murdered and buried as tragic victims of accidents, suicides or simply natural causes would rise from their graves to hold a candle – every cemetery in the world would be brightly lit. Whoever said it, the mystery writing husband-and-wife team of Edwin and Mona Radford would have disagreed with him. 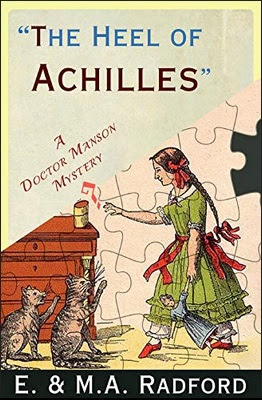 The Heel of Achilles (1950) is the eight case of Dr. Harry Manson and, unlike the previous novels in the series, the book is an inverted detective story in the mold of R. Austin Freeman. In their foreword, the Radfords wrote that they hoped the story may act as "a warning to those people who may think that they can commit a crime" and "get away with it." Because they can't. The Heel of Achilles is a demonstration why the logical, scientifically educated detective invariably gets his man.

The Heel of Achilles takes the classical approach to the inverted mystery with the first part telling the story of the murderer and his victim-to-be, showing every detail of "a cast-iron plot of murder" that "nothing could detect as being other than an accident," while the second part unmercifully lays bare all the mistakes the murderer made along the way – ending the story on a somewhat depressing note. So the book is really two novellas in one that can actually be read as two separate, standalone tales of crime and detection.

In the first part, entitled "Story of a Murder," the reader is introduced to Jack Edwins, a humble garage mechanic, who became the unwitting accomplish in a scheme hatched by a petty crook and racehorse gambler, James Sprogson. A simple burglary to quickly snatch "thousands of pounds' worth of stuff," but a police whistle interrupted them and Edwins was left standing with his pockets stuffed with jewelry! Sprogson was the only one who shot from the house into the waiting hands of the policemen and this meant Edwins had an opportunity to silently make his exit, which he did without being weigh down by the fortune spilling from his pockets. A fortune he used to change his name, marry the love of his life and a buy his own service station, but put some of his hard earned money aside to anonymously repay the owner of the stolen goods.

Sprogson, on the other hand, was sentenced to three years penal servitude and, when he was released, Edwins had vanished from the face of the earth and Jack Porter, of the Green Service Station, had taken his place. Only a fluke brought Sprogson, now James Canley, back to Porter. What he wants is his cut of the money and then some. So he decided to kill Canley in order to keep what he had built for the woman he loved so much.

Porter is "an omnivorous reader of detective stories" and "modelled his plan on the mistakes made by the lawbreakers in the novels he had read," which gave him the idea to stage an accidental death and meticulously goes to work – presenting the local police with a decapitated corpse lying on the track of a railway line. The local authorities are willing to accept that it was nothing more than an unfortunate railway accident, but the railway doctor insisted on calling in Scotland Yard. Enter Dr. Harry Manson.

As an aside, if The Heel of Achilles had been a regular detective story, the murder would have come very close to being an impossible crime, with a single track of footprints leading from the victim's cottage to the tracks, had it not been for "the long grass verge that edged the track."

The second part of the story, "Cherchez L'Homme," brings Dr. Manson to the scene of the crime and laboriously begins to poke holes in, what seemed to be, a relatively watertight scheme. Dr. Manson patiently explains every step of his investigation and reasoning, but, to do this properly, the local police officers had to be little denser than usual ("very trustworthy, you know, but no thinker").

However, the payoff is that you get to see a painstaking destruction of a carefully laid plan with apparently nothing linking the victim with his killer. A beautiful combination logical reasoning and forensic detective work. On top of that, Dr. Manson tells the story of two locked room murders, over the course of his investigation, as a basic exercises in logic and gives the story of Maria Lee, a.k.a. Black Maria, as the origin of the police van's name – a claim that has since been disputed by the internet. Still, it was a fun little story and coming across these shreds of arcane history and knowledge is always a bonus you get from these vintage detective novels.

Slowly, but surely, Dr. Manson proves the accident was murder and treads closer to the murderer with every passing chapter, which made realize that a truly scientific mystery novel is playing the detective story in god mode. Where the more intuitive or workman-like sleuths have to interpret nebulous clues or pick apart alibis, the scientific investigator can pick up the trail of nameless, faceless killer by studying cigar ash, dust and small fibers. It's almost unfair to the hardworking, sympathetic murderer and even Dr. Manson says at the end of the story that he never "concluded a case with less satisfaction." An ending painfully showing that justice and restoration of order isn't always what it's made out to be.

The Heel of Achilles is a well written and carefully plotted inverted detective novel with the first half focusing on the personal side of the murder and the second half presenting the impersonal examination of the crime, in which Dr. Manson demonstrates that every contact leaves a trace – wringing the truth from the physical evidence the murderer so cleverly tried to alter or destroy. More importantly, the hardest thing to do with an inverted mystery is to keep the reader interested when they already know all of the answers. I believe the Radfords succeeded here by making it a challenge to the reader, of sorts, by serving their readers with a seemingly airtight murder plot and than pointing out the holes. So easily one of the most meticulously plotted inverted detective stories, right up there with John Russell Fearn's Pattern of Murder (2006), and comes highly recommended!
Geplaatst door TomCat on 5/15/2020