Death Out of Nowhere (1945) by Alexis Gensoul and Charles Grenier

One of my little pet peeves with Robert Adey and Brian Skupin's locked room bibliographies is the inclusion of novels and short stories that were either erroneous advertised or mistakenly perceived as impossible crime stories, but have since been identified as non-impossibilities – receiving a "not impossible" comment with their entries. I think these entries are a waste of page space and could have been easily fixed by listing them at the back of the book with the comment that they aren't locked room mysteries. 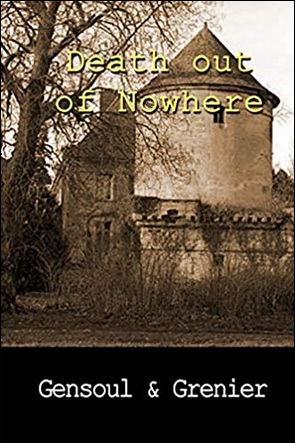 A particular egregious example is Elizabeth George's 800-page tome, A Traitor to Memory (2001), which apparently is one of those psychological, character-driven crime novels listed by Skupin in Locked Room Murders: Supplement (2019) as a non-impossible crime. Strangely enough, this entry came to mind when I finished reading the latest offering from John Pugmire's treasured Locked Room International.

La mort vient de nulle part (Death Out of Nowhere, 1945) by Alexis Gensoul and Charles Grenier is more of a novella than a novel, scarcely a 100 pages long, but jam-packed with phantom shootings inside locked or watched rooms. The complete opposite of A Traitor to Memory!

Death Out of Nowhere presents the reader with a classic, well-worn premise when four "inseparable friends" gathered for their annual gathering at the small lodge of Breule Manor where, each year, Baron Pierre de Malèves "offered them a peaceful and economical vacation." A group of friends comprising of a celebrated mystery novelist, Jules Dublard, a newspaper reporter for L'Informateur, Lucien Darlay, a school supervisor, Louis Beaurieux, and a registration clerk, Yves Le Bellec – who begin the story with a discussion of one of Dublard's locked room puzzles. When left alone, Le Bellec asks Dublard if wants an opportunity to display his talents.

An opportunity to match wits "a master who has taken every precaution not to leave the slightest trace" of his "beautiful crime." Only thing Dublard has to do is fix the time of the crime and show how it was done. Dublard picked up the gauntlet.

Le Bellec theatrically placed a handkerchief on his head, took out a pack of playing cards and threw the king of spades to the floor while shouting, "the Emperor of China be damned." A silly looking, but soon to be ominous, ritual that would be repeated several times throughout the story and always with the same result. A gunshot, somewhere in the direction of the manor, shattering the peace.

The first victim is the elderly great-uncle of the Baron, Antoine de Malèves, whose body is found in his room with a bullet in his back, but the door was bolted and the closed window was covered with metal shutters – no weapon was found inside the room! Commissaire Machaux with the baffling, seemingly impossible, shooting of an inoffensive, seventy-year-old butterfly collector. But the best, most amusing part of this still very traditional portion of the story is Dublard "constructing extravagant hypotheses" showing how different people could have achieved the seemingly impossible. I loved it when he started firing off false-solutions like a vintage Gatling gun! However, the traditional manor house mystery soon veers into pulp territory when a second murder is committed under nearly identical circumstances and a third person is wounded in a salon with both doors under observation. These phantom shootings are followed by yet another impossible murder! As you probably can expect, not every locked room-trick employed in a multi-impossible crime story is going to be first-rate. The third shooting uses a very slight variation on a familiar, well-worn trick, creaking with age, while the fourth shooting was simply disappointing, but I can see why the first and second murder earned it a place on Roland Lacourbe's Locked Room Library – a list of essential novels which should be included in "any respectable (French) locked room lover's collection." A "truly original method of causing death" and "a machine for creating an alibi."

Don't get me wrong, the solution is pure, unfiltered pulp and not to everyone's taste, but I've developed a taste for pulp-style impossible crime stories. So probably liked it a little more than most readers.

It's very tempting to compare Death Out of Nowhere to the (translated) detective novels by Gaston Boca, Pierre Véry and Noël Vindry, but I commented on JJ's review that everything about the story struck me as the French equivalent of John Russell Fearn and Gerald Verner. My observation turned out to be spot on! As the story progressed, Death Out of Nowhere began to remind me more, and more, of those two pulp writers. I can even name you a novel by Fearn that uses the same principle, as the first murder here, to create a locked room puzzle with only difference being is how exactly death was delivered to the victim.

Unfortunately, the story also shares one of the shortcomings of the pulps: a lack of proper clueing. Death Out of Nowhere gives the armchair detective no opportunity to work out any part of the plot and even the map given early on the story withholds a detail that's shown in a map in the last chapter. And that last chapter shows that a lot more was withhold from the reader over the course of the investigation. So this is story you simply have to read and enjoy, instead of trying to participate as the silent detective, but this short, tightly written and well-paced story is perfect to do exactly that. You're just along for the ride.

So, all in all, Death Out of Nowhere is a curiosity of the locked room genre, but a tremendously enjoyable one, overflowing with lively and fanciful terrors, but the short length ensures this unusual, pulp-style detective story doesn't overstay its welcome – which helped balance out its strengths and weaknesses. Once again, not everyone's going to love it, but, if your taste runs in the direction of the pulps, you have Death Out of Nowhere a shot.
Geplaatst door TomCat on 5/11/2020