I began this month with a review of the fourth title in Michael Dahl's five-book Finnegan "Finn" Zwake series, The Viking Claw (2001), which are archaeological mystery novels, written for a teenage audience, best described as a cross between Gosho Aoyama's Case Closed and The Real Adventures of Jonny Quest – originally published between 1999 and 2002. More importantly, the series is littered with imaginatively-posed impossible crime scenarios and locked room mysteries! 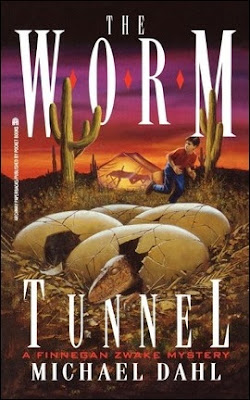 The Viking Claw treated the reader to a disappearance from an inescapable hammock-camp clamped to the side of a cliff and a no-footprints-in-the-snow puzzle from the past. The second title in the series, The Worm Tunnel (1999), offers a murder inside a sealed, high-tech tent at an archaeological dig in Mexico.

Finnegan Zwake is the now 13-year-old son of two archaeologists, Leon and Anna Zwake, who disappeared while searching for a lost city "tucked somewhere among the frozen volcano-cones of Iceland" (see The Viking Claw) and have been legally declared dead, but Finn knows they're still alive. Finn argues that everyone in his family is "an expert on dead things" and they known "if something is dead or not." One of many dark clouds looming over this teenage detective novel.

So now Finn travels the globe with his famous mystery writing uncle, Stoppard Sterling, in the hope of finding a clue to the whereabouts of his missing parents, which brings them to some exotic, colorful locations and archaeological hotbeds, but the Ackerberg Institute is always ominously lurking in the background – a shadowy organization who used to employ his parents. Apparently, Finn and Uncle Stop had an encounter with agents of the institute in The Horizontal Man (1999) and they dress in "black suits, black ties and black leather gloves" with sunglasses. I like to believe the Ackerberg Institute is a subsidiary of the Black Organization from Case Closed.

The Worm Tunnel brings Finn and his uncle to a fictitious Central American country, Agualar, where, years previously, a 6-year-old Finn had accompanied his parents on an Ackerberg sponsored dig.

A dig that uncovered a historical treasure trove of gold Mayan artifacts, but Hurricane Midge forced them to abandon the campsite and return to the United States. There was, however, "a mysterious thief at the dig site" and, in order to protect a precious artifact, called crocodile de ouro, he "buried the golden crocodile under his tent." Something they learned from his diary and it's still buried there!

Finn wants to dig it up and use it to finance a hunting expedition for his parents, but the place is dangerous to travel to and they are accompanied by their cop buddy, Jared Lemon-Olsen. And one of those dark clouds briefly drifts over the story. Jared points out that forty tourists are killed there every year and tells Finn he intends to bring him back home with his head still attached to his shoulders and all of his fingers in place. So, what he was saying here, is that Finn better listens to him unless he wants to end up in an abandoned warehouse being whittled down by a cartel member with a pocket knife. I never expected to read a line like that in a juvenile detective novel.

When Finn, Uncle Stop and Jared arrive at the old campsite, they find that the former dig site is now occupied by a group of dinosaur hunters and paleontologists, under the guidance of the hated Professor Tuscan Freaze, who found fossilized eggs of a new species of dinosaur – believing the place used to be nesting ground in prehistoric times. Professor Freaze is accompanied by his son, Dr. Tulsa Freaze, who took along his wife, Fleur. There are three other members, Dr. Himmelfarben, José Mirón and Gabriel Paz, who unexpectedly joined by a well-known Chinese paleontologist, Nixon Wu. Wu was one of the scientists who dug up one of "the largest collection of prehistoric eggs ever discovered" in Mongolia and, when he heard that the famous professor was hunting dinosaur eggs in Agualar, he decided to offer his services.

On a side note, Wu was spotted in the opening chapter by Finn, but Jared refused to stop the car and, when they looked out of the back window, Wu had vanished from the empty desert background! As if he had vanished into thin air in a matter of seconds. An impossible disappearance mystery solved in chapter 5.

The Worm Tunnel offers a genuine, double-layered and beautifully executed locked room mystery in chapter 8 when Professor Freaze's body is found sprawled on a cot in the middle of his tent. A "gleaming knife" protruded from his back! The problem is that the high-tech tent was completely closed up and sealed from the inside with zippers and turn-locks, which is why they had to cut their way into the tent. The second impossibility concerns the murder weapon, "a golden knife with feathers carved into the handle," but Finn and his uncle were looking at the knife inside a locked trailer when the murder was discovered. And when they returned to the trailer, the knife had vanished! So how could the knife have been in two places at the same time?

They closely examine the tent, discuss various methods how the zippers, or turn-locks, could have been manipulated and Stoppard discusses one of his own locked room plots, which share some similarities with the sealed tent murder, but the clues that lead them to the solution are a balloon and the victim's dirty socks – unveiling a completely new and satisfying locked room-trick. I was tempted to draw a comparison with the equally original solution to the locked tent murder from Takemaru Abiko's short story "Ningyou wa tent de suiri suru" (1990), recently translated as "A Smart Dummy in the Tent," but the nature of the trick places The Worm Tunnel right next to Carter Dickson's The Judas Window (1938) and Arthur Porges' "The Unguarded Path" (collected in These Daisies Told: The Casebook of Professor Ulysses Price Middlebie, 2018). A locked room stories about invisible doorways that only murderers can reach through to get to their victim's when they're all alone in a sealed room. So, needless to say, I rate this locked room-trick quite high.

Unfortunately, this double-layered impossibility is what gave the otherwise skin-and-bones plot some much needed bulk, because the murderer was not difficult to spot and the motive felt tacked on. The motive was briefly foreshadowed, but to actually use it as a motive detracted a little from the fascinating background of fossil hunters. So, very much like The Viking Claw, this turned out to be another mixed bag of tricks, but with the good definitely outweighing the bad.

That being said, taken purely as a locked room mystery, The Worm Tunnels ranks as one of the better, more original, juvenile detective novels and strangely fitting that the book was published at the tail-end of 1999. The 1990s were not particularly well-known for its high-quality impossible crime fiction, not until recently anyway, but that decade is book-ended by Nicholas Wilde's Death Knell (1990) and Dahl's The Worm Tunnel – two teenage crime novels with the best locked room-tricks of the decade. You can now certainly look forward to reviews of The Horizontal Man, The Ruby Raven (1999) and The Coral Coffin (2002). Not necessarily in that order.
Geplaatst door TomCat on 5/25/2020