Some years ago, I reviewed three, once very obscure, mystery novels by John Bude, The Cornish Coast Murder (1935), The Cheltenham Square Murder (1937) and Death on the Riviera (1952), which were well written and amusing enough, but thinly plotted and flimsily clued – striking me as stories about detectives rather than detective stories. So my interest in Bude had waned over the years until the British Library announced a twofer volume with a hard-to-find, long out-of-print locked room mystery was scheduled for 2020! Well, that was enough to get me back on board. I'm easy like that. 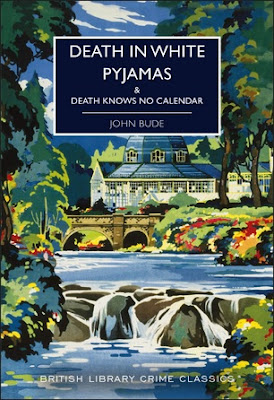 Earlier this year, the British Library released Death Knows No Calendar (1942) together with Death in White Pyjamas (1944) in a single volume and these novels promised to be very different from his Detective-Inspector Meredith series. Very different.

Death Knows No Calendar is one of only two of Bude's impossible crime novels, preceded by Death on Paper (1940), which is listed in Robert Adey's Locked Room Murders (1991) with a murder inside a locked studio and an inexplicable disappearance. A pretty little puzzle posing a challenge not to one of Bude's intelligent and sympathetic policeman, but an affable and enthusiastic amateur detective, Major Tom Boddy, who gorged himself on detective stories – accumulating "a vast knowledge of time-factors, alibis, motives, ballistics, moulage, photo-micography and police procedure." Major Boddy is assisted by "a small bird-like man," Syd Gammon, who had once been his batman. And he plays his role in helping to find the key to this locked room puzzle.

Lydia Ardunel is an accomplished painter and one of the leading lights of the village, Beckwood, but she's a woman of "twisted values" who moved through "the world perfectly aware of the spells she cast over others less gifted."

Five years ago, Lydia seduced the preacher, Reverend Peter Swale-Reid, whose soul and religion has been torn apart over his mistake. Always living in fear that his parishioners suspected and secretly looked upon him as a hypocrite unworthy to be their spiritual guide. Stanley Hawkinge is a simpleminded, but an honest, hardworking farmer, who had "burst into a great erotic conflagration at the age of twenty-eight" and had been pathetically devoted to Lydia for ten years – until he met someone else. Something that did not sit well with Lydia. Lastly, there's Lydia's husband, John Ardunel, who used to be an actor and his marriage to Lydia had "hauled him at a single pull out of obscurity and poverty," but deep down he hated his wife with "a cold and calculated hatred."

So there you have all the ingredients for a nice little murder mystery! A victim practically tailor-made to be murdered. A cozy circle of potential murderers equipped with motives and alibis. A whole series of strange events in the parish preceding the murder. One evening, Major Boddy hears the news that Lydia has been found dead in her studio, following a gunshot, with a Colt. 45 by her side. The door was locked on the inside with the key stuck inside the lock. The window was securely locked with the curtains drawn and the fixed skylight can't be opened. So, on the surface, it looks like a clear case of suicide, but a closer examination of the wound and position of the gun opens the possibility of murder. 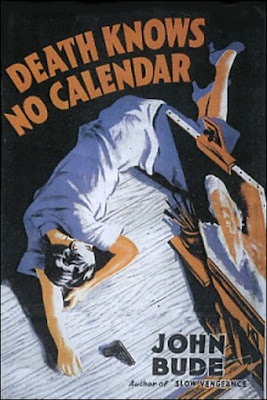 Nonetheless, the locked situation of the studio convinced the jury to return a verdict of suicide at the inquest and gives Major Boddy a freehand to begin playing amateur detective.

Major Boddy not only has to figure out who of the small group of suspects shot Lydia, but how he get, or out, of the locked studio. A peach of a problem sweetened when they're all armed with "impregnable alibis" and one of the suspects goes missing! And there are more problems and puzzles on the horizon to contend with. Such as a car that vanishes practically in front of Major Boddy and an ingenious, mechanical crime/alibi very late into the story (murderer is already known by then).

So you can probably understand why I liked Death Knows No Calendar so much. It has a lively amateur detective who brings the same kind of energy to the investigation as Anthony Berkeley's Roger Sheringham. A galore of alibis reminiscent of Christopher Bush and John Dickson Carr's dedication to the locked room mystery, but plotted with the technical know-all of a John Rhode novel and Death Knows No Calendar actually reminded me of Invisible Weapons (1938) – which share some (superficial) resemblances when it comes to tricks and structure. This book gives you something, usually the best, from all those writers.

Death Knows No Calendar is purely a how-was-it-done with the murderer's identity becoming more, and more, obvious with each passing chapter and emerges long before the final chapter comes around. A lot trickier is destroying this person's alibi or figuring out how Lydia was killed while all alone inside a locked room. And proving it! Major Boddy has to conclude that the murder was the work of "a deft and brilliant artist in crime" who created "a murder de luxe."

Admittedly, the schemes and tricks hatched by the murderer are, perhaps, too workmanlike and mechanical in nature to be artistically labeled de luxe, but the whole plot is a fine example of good, old-fashioned craftsmanship without getting the story bogged down in technical details.

So, all in all, Death Knows No Calendar was the polar opposite of my previous encounters with Bude. A clever, resourceful and engagingly written detective novel with a crammed plot that left me wanting more! Needless to say, you can expect a review of Death in White Pyjamas before too long.
Geplaatst door TomCat on 5/21/2020