Back in 2015, I picked up a copy of Robert Arthur's The Secret of Skeleton Island (1966) on a whim, but the book unlocked a whole new wing of the detective genre to me, a sub-genre known as juvenile mysteries, where many, often completely unknown, locked room mysteries remained hidden for years or decades – some of them proved to be quite good. Over the years, I found together "JJ," of The Invisible Event, some twenty of these junior locked room novels and short stories. 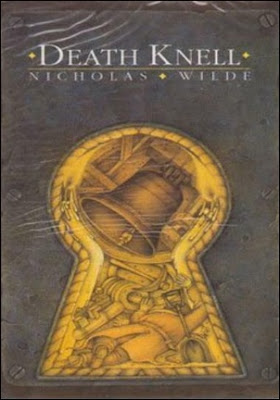 Just to give everyone who's unfamiliar with these elementary-and high-school equivalents of the impossible crime story an idea what to expect, I cited half-a-dozen of the more notable examples below.

A burglar inexplicably disappears from a house with all of its exits either locked or under observation (Enid Blyton's The Mystery of the Invisible Thief, 1950). A car racing down a dangerous, snaking mountain road vanishes into thin air (Bruce Campbell's The Clue of the Phantom Car, 1953). The theft of charity money from a locked school safe and the substitution of an empty box in a watched room (Norvin Pallas' The Locked Safe Mystery, 1954). A 3000-year-old mummy is heard whispering in an unknown, long-dead language (Arthur's The Mystery of the Whispering Mummy, 1965). Paintings being moved around inside a locked, fortress-like studio (William Arden's The Mystery of the Shrinking House, 1972). An elderly, wheelchair bound woman seemingly evaporated from inside a moving, closely watched ski-lift gondola (Clue Club episode "The Real Gone Gondola," 1976).

So, as you can see, these junior detective novels rarely deal with murders, or even natural deaths, but are, as a rule, written around strange disappearances, thefts, buried treasure, haunted house, codes and gangs of criminals – omnipresent tropes of the juvenile detective story. This is not a rule cast in iron and exceptions can be found (e.g. Hugh Lloyd's The Clue at Skeleton Rocks, 1932). An exception that has become more common over the past thirty years.

JJ reviewed Robin Stevens' Murder Most Unladylike series on his blog, most notably the impossible crime novel First Class Murder (2015), while I discussed a Japanese light novel (young adult), Zaregoto series: kubikiri saikuru (Zaregoto: The Kubikiri Cycle, 2002) by "NisiOisN," in which one of the victim's is decapitated inside a locked storage-room. So child-and teenage detectives meddling in murder cases, like good kids, have become more common and a staple of the Japanese anime/manga detective stories. Recently, I came across, what could be, the earliest example of a juvenile mystery novel with an adult plot when thumbing through my copy of Brian Skupin's Locked Room Murders: Supplement (2019). An adolescent locked room mystery that could have been penned by John Dickson Carr, Paul Halter or Derek Smith. Yes, it's that kind of a detective story!

Nicholas Wilde's Death Knell (1990) is an ingenious, classically-styled impossible crime novel with a ghostly murder, steeped in history and legends, inside a sealed crypt with two crime scene maps and a handwritten chart – tabulating alibis, motives and opportunity. However, the book also has a warm, human touch and the teenage protagonists are realistic, convincingly drawn characters.

Tim is a 14-year-old boy from London who takes his friend, Jamie, along for the winter holiday at the old-world vicarage of his grandfather in Lychwood, Norfolk.

Wilde describes Norfolk as a place "not really seen at all, only guessed at" or "half-glimpses sometimes" when "you weren't quite looking" and "slipping into hiding when you looked too hard." A landscape that "watched you from behind your shoulder." So a perfect habitat for ancient legends and old ghost stories! During their holiday, Tim and Jamie are told the haunting story attached to the abandoned church, which dates back to the time of Henry VIII and the Dissolution of the Monasteries. In the late 1530s, the church was closed down as "a place of the old Catholic worship" and the priest was told to pack his bags, but the priest's old day-book contains three entries following the closure of the church. The first entry warned "God has departed from His house," but, "where God is not," there "shall another power enter in" and "take possession" – a second entry confirms a creature has "come forth from his hiding in the earth." What followed is a historical horror story.

On four, separate occasions, a single stroke of the bell emanates from the locked, deserted church and every time a villager died. One time, a shadowy creature was seen edging away from the church and vanishing into the locked crypt. So the bell was taken down and the middle of the floor of the crypt was sealed tightly with a giant stone resembling "an old, forgotten tombstone." And, as the story ended, the church-bell "tolled one single stroke."

So, when they go to investigate they discover that Old Jefford, who lives at the High House, lying face down on the floor of the crypt with a pick-ax and a bunch of keys next to him. The door is not only locked from the inside, but blocked with the giant stone! Nobody else had been hiding in the room and the crypt has no hidden tunnels, secret passageways or camouflaged doors. Only window is small, narrow with an inch thick glass that was closed when the murder was discovered. So how did the murderer get away? How was the large, unyielding stone lifted and hauled up a flight of stone stairs? The hole situation looked plain impossible! 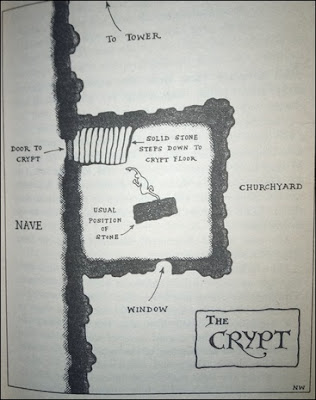 The vicar believes it was an unfortunate accident, but the police is convinced it was murder and, for months, they uproot and disturb the normally quiet, everyday routine of the village. But by that time, the boys have returned to London and it would take a whole year before they were allowed to spend another (winter) holiday with Tim's grandparents, which is where the story becomes a little more than a well-done locked room mystery for teenagers – showing Tim's grandparents had "aged about twenty years in twelve months" under the strain. Tim and Jamie are determined to get to the bottom of the case, but this is easier said than done, because Jamie, as somewhat of an outsider, can "look at it like a maths problem." On the other hand, Tim is not as detached as his friend as the solution to this math problem will affect his grandparents, their friends and neighbors. A nicely-done, warm human touch to the characterization.

Unsurprisingly, the inquisitive, logical-thinking Jamie is the one who puts together all of the puzzle pieces, but they still work wonderfully together and their investigation in the still-falling snow is full of wintry charm. A search for the truth ending with a great scene in the dark crypt and an emotionally regretful confrontation with the murderer, which makes Wilde's Death Knell one of the best characterized, plotted and written juvenile mystery novels. But, for me, the absolute highlight of the story was the solution to the impossible murder inside the locked crypt and the explanation how a slab of stone came to rest against the door. A very original locked room-trick in the spirit of Carr, Halter and Smith. Seriously, all three of them could have written Death Knell and the book is a must-read for everyone who thinks highly of those lauded mystery writers. You won't be disappointed, I promise!

There are only two things marring the story. Firstly, the seasoned armchair detective will quickly suspect who's behind the murder, which still leaves you with having to pick apart how it was done and that's a bit trickier to do. Secondly, Wilde provided no explanation for the series of ghostly, seemingly impossible, deaths in the 1500s and only served as a ghost story to add some atmosphere to the scene of the crime. Somewhere, there's a good historical mystery hidden in that ghost story.

Putting my nitpicking aside, Wilde's Death Knell is one of the best written and now one of my favorite juvenile detective novels with an a well-imagined, excellently executed locked room-trick worthy of the grand masters of the impossible crime genre. Good, believable characterization and solid storytelling. What a shame Wilde didn't write more of them!

A note for the curious: I read Death Knell in English, but discovered that the book had been translated in Dutch, under the title Doodsklok (Death Clock or Death Bells), but I think Zielenrust would have been a better title. A literal translation of zielenrust is soul rest, but peace of mind would be a more accurate translation and would fit the slightly haunted ending of the story.
Geplaatst door TomCat on 3/11/2020