Murmurings from the Past

"Had I been, as you say, dead... it is more than probable that dead I should still be; for I perceive you are yet in the infancy of Galvanism, and cannot accomplish with it what was a common thing among us in the old days."
- Allamistakeo (Edgar Allan Poe's "Some Words With a Mummy," 1845)

Last month, I posted a review of The Secret of Skeleton Island (1966) by Robert Arthur, which is the sixth entry in a series of juvenile mysteries that ran from 1964 to 1987 and starred a group of meddling teenagers – who refer to themselves as The Three Investigators.

I enjoyed the book more than I anticipated and thought it merited a prompt follow-up, but felt insistent on picking another one of Arthur's contributions. Since his involvement kindled my initial interest in the series. The synopses of The Secret of Terror Castle (1964) and The Mystery of the Green Ghost (1965) piqued my interest, but eventually settled for The Mystery of the Whispering Mummy (1965). 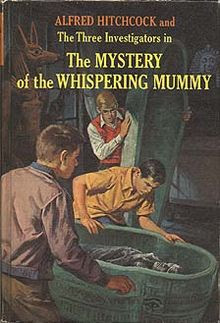 The Mystery of the Whispering Mummy opens with a brief introduction by Alfred Hitchcock, who's a minor character in the series, in which he introduces the characters and gives some background information for "the benefit of those of you who have come in late." I already went over the introductions of Jupiter "Jupe" Jones, Peter Crenshaw and Bob Andrews in my previous review, but something that was completely omitted in The Secret of Skeleton Island was any mention of their headquarters – which consists of a converted mobile home trailer hidden in The Jones Salvage Yard. Guess that really wasn't pertinent information for an outdoors adventure story.

Anyway, the trailer has a small office space, a lab, a darkroom and a smattering of equipment, such a surveillance periscope, which the boys rebuilt from junk that came into the salvage yard.

It's at their headquarters where they receive two letters: one of them is from a wealthy, middle-aged lady who has heard about their success in one of their previous investigators (i.e. The Mystery of the Stuttering Parrot, 1964) and wants to engage their services to help find her missing cat. Pete and Bob practice their deduction skills on the letter before reading it, which makes for a fun Holmesian scene.

However, it's the content of the second envelope that'll provide the trio of investigators with a bizarre problem that could've been plucked from the pages of a John Dickson Carr or Edward Hoch story. There's even a particular situation that arguably qualifies as a locked room problem and that comes on top of an apparently supernatural phenomena.

The name engraved on the top of the expensive-looking bond stationary is that of Alfred Hitchcock, celebrated film-director, who has a friend with a peculiar problem that they might find interesting: a 3000-year-old mummy has been heard whispering in a long-dead language!

Professor Robert Yarborough, "a noted Egyptologist," has converted a wing of his Spanish-style mansion into a private museum, strewn with "relics taken from the tombs of ancient Egypt," which has become the temporary home for the miraculous mummy – which the professor discovered twenty-five years before inside a well-hidden tomb in a rocky cliff. The professor is a man of science and is of the opinion that it's not natural "for a mummy dead for three thousand years to talk," or "even to whisper," but that's what appears to happen every time he’s alone with the remains of Ra-Orkon.

The problem is that Yarborough can't consult a professional colleague, because they would pity him or spread rumors about him getting old and senile. A private investigator would assume the professor had bats in the belfry, but "three imaginative boys" with "no preconceived notion" just might do the trick. 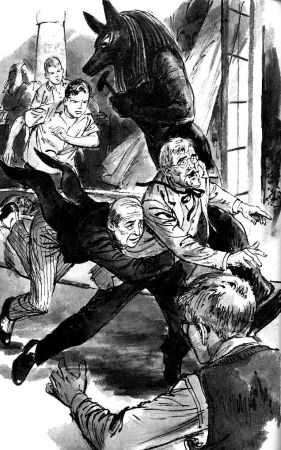 Jupe has a trick up his sleeve to make the mummy whisper in his presence, but finds himself confronted with somewhat of a locked room problem when the ruse succeeds: mummy begins to murmur when "he was totally alone" and "the door into the room where the professor and Bob waited was shut." Nobody was near the mummy case to "throw" his voice and the possibility of a radio transmitter had already been eliminated. I was a bit skeptical about the actual explanation for this locked room mystery, because it seemed out-of-time, but consulting the all-knowing Internet revealed this was technically possible since the early 1960s. So the trick was technically possible.

I think Arthur should be commended for thinking enough of his young readers to avoid the obvious (radio transmitter) and hackneyed (ventriloquism) and came up with something slightly more complex and original.

Anyway, the points between the initial investigation and the final explanation is fraught with danger and side-distractions, which include a frightened butler who's deadly afraid of the mummy's curse. There's a colleague of the professor, an expert in Middle-Eastern languages, whose father was part of the original expedition, but "was murdered in a Cairo bazaar" a week after the mummy's discovery. A slender, foreign-looking boy is discovered lurking in the garden and he'll be in tight spot with one of the investigators when coming across a couple of burglars. Even Anubis, "the dreaded jackal god of Ancient Egypt," makes an appearance in our plain of existence.

This compound of danger and mystery makes The Mystery of the Whispering Mummy a very happening kind of adventure/mystery, but not entirely in the same league as The Secret of Skeleton Island – which I loved and adored. However, I still very much-appreciated Arthur's dedication here to create a solid plot with clues, mystification, Sherlockian references and something that amounts to a locked room mystery. Robert Arthur was basically mystery genre's version of the Paid Piper of Hamelin, who lured many children to our beloved detective stories.

On a final note, allow me direct your attention to the review I posted only yesterday, which is Georgette Heyer's Envious Casca (1941) and has a locked room murder in an old-fashioned manor house during a Christmas holiday. What's not to like there?