"The criminal is the creative artist; the detective only the critic."
- Aristide Valentin (G.K. Chesterton's The Innocence of Father Brown, 1911)

Ever since its inception, The London-based Detection Club produced some interesting and experimental volumes of collaborative detective fiction, which consists mainly of round-robin novels (e.g. The Floating Admiral, 1932), but The Anatomy of Murder (1936) took a break from fictional crimes with plots constructed like an obstacle course. 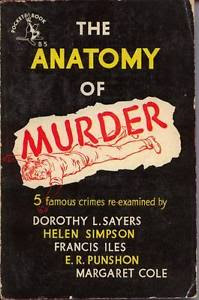 The Anatomy of Murder is a collection of true crime articles and cast the contributors in the role of armchair criminologists. It's a short who's who of the early Detection Club: Dorothy L. Sayers, E.R. Punshon, Helen Simpson, Margaret Cole and Anthony Berkeley – appearing here under his penname of "Francis Iles."

They're tasked with re-examining five infamous cases from the late 1800s and early twentieth century, but these literary exhumations consist mainly of going over the facts and consider their implications. So don't expect any mind-blowing, alternative explanations being spun from the giving facts. It's a dry and factual collection, but interesting from a historical perspective and a particular item of interest for avid consumers of true crime stories.

Note that I'll be keeping the case descriptions as short and summary as possible, because murderers operating outside of the printed page are generally unconcerned with creating a clear, straightforward and clue-filled plot – unlike their fictional counterparts.

Helen Simpson wrote the first chapter, "Death of Henry Kinder," which could also have been titled "Crime in Australia" and is a textbook example of "an unsatisfactory crime" from "the point of view of a reader of detection stories."

Henry Kinder was a chief teller in the City Bank of Sydney and appeared respectable, but was very fond of hard liquor and his drinking habits had began to affect his health in the months preceding his death. On October 2nd, 1865, the news of Kinder's suicide startled many of his respectable friends in the city and a jury brought in a verdict death "by the discharge of a pistol with his own hand," but by that time the rumor mill had started – with subsequent events revealing Kinder may have been polished off with a dose of poison by his wife's lover. Henry Louis Bernard was put on trial and Simpson's report, peppered with diary entrants, letters and pieces of court transcripts, shows how the chain of events clanked "to a madman’s fandango," which lead to a very unsatisfactory conclusion.

Well, unsatisfactory if this had been a piece of fiction, but, as a criminal case from history, it demonstrated that even if the perceptive story book detectives had existed their singular talents be rendered pretty much useless in cases lacking their own clarity of mind. You can read an extensive description of the case here. 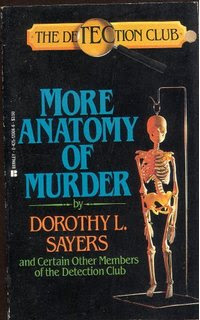 Margaret Cole's penned the second chapter and deals with "The Case of Adelaide Bartlett," which is better known as the "Pimlico Mystery" and shares some similarities with the previous case: in both cases a spouse is fatally poisoned after a previous incident relegated them to a sick bed. In the case of Henry Kinder, it was an apparent self-inflicted gunshot wound to the head, but in the 1886 death of Thomas Edwin Bartlett it was mercurial poisoning – which he claimed was self-ingested. However, it was not the poison that would end up killing him.

A month later, Bartlett passed away and a post-mortem examination revealed a fatal quantity of chloroform in his stomach. The inquest yielded a verdict of willful murder and Adeleide Bartlett was indicted, but acquitted under "immense cheering" in the courtroom. As Cole noted, it was one of the most interesting trials of its day, because it was not "a tale of horror or brutality." None of the people, however odd or foolish, were monsters and tried "to be as nice as impossible under rather difficult circumstances." It was an interesting study in characters and motives that were somewhat ahead of their time.

However, it must be noted as well that one of the main reason for acquittal was failing in providing an answer how the poison could've been administrated without a struggle, since chloroform burns, but Cole makes a valid suggestion based on the characteristics of the people involved – and had the jury considered this possibility "she would have never gone free." A very odd case to say the least.

Interestingly, Cole's account includes a list of nineteenth century medicines and remedies given to Thomas Bartlett after his mercurial poisoning, which did not sound very appetizing.

For the third chapter, E.R. Punshon gives "An Impression of the Landru Case," which deals with the "incredible reincarnation of the Bluebeard of the nursery tales." Henri Désiré Landru was one of the neatest and charming serial killers who ever stalked the European continent. Known as "The Bluebeard of Gambais," Landru operated "during that four-year feast of horror and of terror we remember as the war" and responsible for the complete disappearance of eleven people in such a manner "that nothing can be declared with certainty" – concluding that "no jury" would've brought in "a verdict of guilty" had "each case stood alone." It's an accumulation of those eleven disappearances in close proximity of Landru, a methodical kept notebook and a storage room with a "strange collection" of items "once the property of a woman who once had known Landru and now was known to none" that became his undoing.

Punshon sketches an interesting, but unsettling, picture of charming confidence man with the predatory nature of "Jack the Ripper," but with more self-control and enjoyed to play the game until the very end – which in Landru's instance was up to the moment he was lead to the guillotines. You almost have to admire the guts and brawn of such an imperturbable character, but I’m sure France could've used such talents elsewhere at that specific point in time.

Dorothy L. Sayers goes over one of the England's most infamous "unsolved" murder cases in it's criminal history, "The Murder of Julia Wallace," which has captured the imagination of several post-WWII crime-writers – including a couple of Golden Agers. The books it has inspired include George Goodchild and C.E. Bechhofer's The Jury Disagree (1934), Winifred Duke's Skin for Skin (1935), John Rhode's The Telephone Call (1948) and P.D. James' The Skull Beneath the Skin (1982). 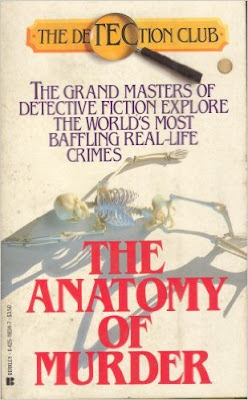 You can understand why mystery writers tend to be intrigued, because if William Wallace was guilty of bludgeoning his wife to death "he was the classic contriver and alibi-monger that adorns the pages of a thousand mystery novels," but if he was innocent "then the real murderer was still more typically of the classic villain of fiction." Where do you begin to describe a case that includes all of the classic ingredients of a detective story: a blood-stained mackintosh, a mysterious phone call from a non-existent person calling himself "R.M. Qualtrough" and an apparent contrived alibi. Then there are the conflicting witness statements: such as a constable who assumed he saw Wallace crying in the streets, but the clients he met after this apparent encounter with the policeman reported he was his usual self.

It was a dark, murky and muddled case, but despite every scrap of evidence against Wallace being circumstantial, which included an exonerating testimony from the local milk delivery boy, he was found guilty and sentenced to death. However, Court of Criminal appeal quashed the verdict in what was at the time an unprecedented move, which left open that intriguing question: who killed Julia Wallace? This was easily my favorite chapter from the book.

Finally, Anthony Berkeley, writing as "Francis Iles," delivers the longest-written chapter from the book as he rides his hobbyhorse, called criminal psychology, across a hundred pages describing the sordid mess known as "The Rattenbury Case." I did not find the case as interesting as Berkeley, but I can understand why people interesting psychological crimes can rattle on about it for page-after-page: a middle-aged woman, Mrs. Rattenbury, living together with her much older husband and her very young lover in a villa, which leads to battering-death with a mallet. Probably not the best chapter to end the book on, but I'm sure there are readers out there, especially readers of psychological thrillers, who'll be as intrigued by chapter as I was by Wallace chapter.

Well, there you have it: five cases re-examined by members of the Detection Club. The cases have something of interest to offer, one way or another, but I think the main draw is that the articles/chapters were written by famous mystery writers from the Golden Age – rather than for the cases themselves. I think it would've been better if they re-examined unsolved cases and provided a possible solution, which was, after all, their job.