No Mourning in the Family

"There we were, all gathered together for a Christmas party, and plunged suddenly into the gloom and menace of official enquiry."
- Malcolm Warren (C.H.B. Kitchin's Crime at Christmas, 1934)

In my previous blog-post, I hinted that a review of a Christmas-themed country house mystery was in the pipeline, but before taking the plunge I want to direct your attention to a compilation post from several years ago – titled The Naughty List: A Modest Selection of Lesser-Known Holiday Mysteries.

As the title says, it's a very modest selection of Christmas mysteries offering a handful of alternatives to Agatha Christie's Hercule Poirot's Christmas (1938) and Ngaio Marsh's Tied Up in Tinsel (1972). 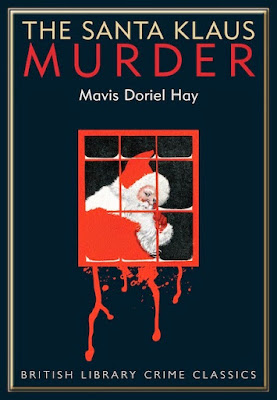 It's a list that includes Pierre Véry's L'Assassinat du père Noël (The Murder of Father Christmas, 1934) and Gladys Mitchell's Dead Men's Morris (1936), but currently misses the recently reviewed C.H.B. Kitchin's Crime at Christmas (1934) and Georgette Heyer's Envious Casca (1941). I'll probably amend the list at a later date, but one title that'll certainly be absent from it is The Santa Klaus Murder (1936) by Mavis Doriel Hay, which I found to be mind-numbingly boring.

I became so bogged down in the book that I needed a breather and read the stories by Max Afford reviewed in the previous blog-post. So don't expect too much from this review.

Mavis Doriel Hay was a British novelist and an expert in rural handicraft, on which she wrote several books, but she also has three Golden Age mysteries to her name: Murder Underground (1935), Death on the Cherwell (1935) and The Santa Klaus Murder. Last year, award-winning crime-writer Martin Edwards noted on his blog how "Hay’s detective fiction seems to be making more of an impact now than it did on its first appearance in the 1930s" and that's "thanks to the British Library's very welcome decision to reprint her three long-neglected novels," which makes me wish I could be more positive about my first encounter with Hay. But it turned out to be closer to Curt Evans' experience with Murder Underground than to the more positive encounter John Norris had with The Santa Klaus Murder.

The Santa Klaus Murder has all the necessary ingredients for a traditional country house mystery, which includes a wealthy patriarch, a gathering of dependent family members and a will that might get some new beneficiaries – giving the large cast of children and in-laws ample motive for murder. 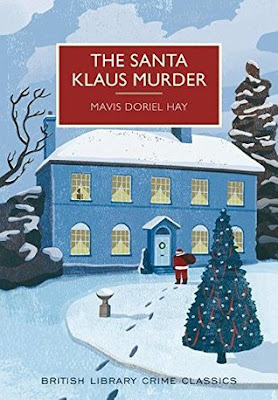 In his younger days, Sir Osmond Melbury scandalized his old-world family by going into business and "made a nice little fortune out of biscuits," which he carefully used to secure a desired baronetcy and fitted the "old house with electric light and sumptuous bathrooms." However, Sir Osmond wasn't simply content with refurbishing Flaxmere: he wanted to gentrify his own family and "made it known to his children that they should be liberally endowed if they married suitably." This approach already misfired with his eldest daughter, but this only made him more subtle and conniving when another daughter appeared with an undesirable partner on his doorstep.

On Christmas Day, while the children are playing with their new toys in the hall and pulling crackers, Santa Klaus discovers the body of Sir Osmond in his private-study: slumped in a chair with a bullet hole in the side of his head, but physical evidence quickly rules out suicide. It’s a case for the police.

I hoped interest would pick up after the characters were introduced and the body was discovered, but I rapidly began to lose interest with each passing chapter – until I either had to take a break or give up on it altogether.

Some of you will probably be of the opinion that I'm being unfair here, but I found reading The Santa Klaus Murder to be a draining experience.

The investigation was largely repetitive: going over who was where and when without adding much of importance to the overall plot. It was devoid of atmosphere and the solution was severely disappointing. The tabulation in the postscript showed there was some fair play, as far as guilty-knowledge and opportunity goes, but the motivation of the murderer can only be guessed – since the entire murder was nothing more than one big risky gamble based on the murderer's own assumptions! It's one of the shakiest motives I've came across in a long, long time!

I love rediscovering obscure, long-forgotten mystery writers and I wish I could've been more positive about Hay, but it's books like The Santa Klaus Murder that makes you understand and appreciate why mystery writers such as Agatha Christie are still being widely read today.

Well, this was the poorest and most negative reviews since I had the misfortune of stumbling across Eric Keith's Nine Men's Murder (2011), but between that one and this review I had pretty good run of good (if sometimes imperfect) to excellent mysteries. I'll try to pick up that thread with the next review and already picked a collection of short stories from a mystery writer whose name is synonymous with good writing, excellent characterization and solid plotting. So stay tuned!
Geplaatst door TomCat on 12/08/2015