"Never was anything great achieved without danger."
- Niccolò Machiavelli

In my previous blog-post, I reviewed Let Him Lie (1940) by Ianthe Jerrold and noted that it was the first of her final two contributions to the genre, which were published a decade after The Studio Crime (1929) and Dead Man's Quarry (1930) under the pseudonym of "Geraldine Bridgman."

The main difference between Let Him Lie and its predecessors was that it's a standalone novel with a character-oriented plot, but Jerrold's final novel differed from all three of its forebears. There May Be Danger (1948) falls in the category of spy-cum-adventure thriller. However, I'd say its unusually structured plot also clung to the traditional mystery, which was abandoned in the end, but it had a grasp on it. 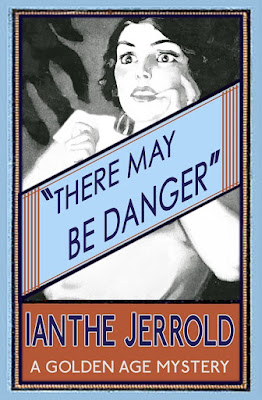 In his introduction, genre historian and author of Masters of the "Humdrum" Mystery (2012), Curt Evans, wonders if There May Be Danger was composed in the early 1940s "as a war-time follow up to Let Him Lie" and may have been turned down "on the grounds that it was more a war-time thriller than a classic detective novel" – which could explain how the book ended up eight years later with the same publisher as The Private Life of Adolf Hitler: The Intimate Notes and Diaries of Eva Braun (1949).

All the same, I think the book stands (IMHO) alongside Dead Man's Quarry as Jerrold's finest piece of crime-fiction. I found it an immensely satisfying story and appreciated the unorthodox structure of the plot, which, I imagine, even diverted from your stock-in-trade spy yarn.

One of the main attractions of There May Be Danger is the protagonist, Kate Mayhew, who used to be a "stage-manager and general factotum" of a small repertory company in London, but a "receding tide of theatre-going" followed the bombers in the sky and the ever-increasing familiar sight of air-raid wardens and gasmasks in the streets below – effectively putting her out of a job. She's contemplating her next course of action when a handbill pasted to a shop window attracts her attention.

The handbill asks "PLEASE HELP" in regards to a missing twelve-year-old London evacuee, named Sidney Brentwood, who resided with a couple in a sparsely populated village in Radnorshire, Wales, but has been missing for several weeks. It seems Sydney "got up in the middle of the night" and "went off on his bicycle" without "saying a word to anybody" and "simply never came back."

Kate concerns herself over the fate of the missing boy and decides to go out there and search for him, which is an undertaking that begins with a visit to Sydney's cat-obsessed aunt in London. But she soon finds herself roaming the streets of the small, Welsh village of Hastry and the surrounding area that's strewn with old homes, neglected building and ancient tumuli – providing the tantalizing possibilities of long-lost hidden passages and chambered barrows.

That's why I enjoyed Kate Mayhew over Jeanie Halliday, the leading heroine from Let Him Lie, because she was a passive character, unwittingly picking up pieces of the puzzle, while Kate went out of her way to find a child she had never met before. It's a premise that energized an already excitingly original plot. A plot that begins somewhat as a traditional mystery novel, but the familiar murder enquiry is ditched in favor of a missing child and nobody even believes there was a crime. Such as Sydney's schoolteacher, who believes he has met with an unfortunate accident, which gives the story an unusual sense of dread, urgency and mystery. Because you want to reach the ending to find out what has happened to Sydney.

Interestingly, there's an archeological-angle to the plot with its burial mounds, possible underground passages from long-ago and a 9th century silver penny of Ceowulf, but, by the end of the book, the story begins to encroach on the territory of blood-curdling thrillers and treacherous espionage novels.

As a large-scale consumer of traditional mysteries, I found the hybrid structure of an espionage-thriller posing for a large part as an atypical detective story to be a pleasant divergent from the norm. I'm just afraid that my review has not done the book any justice, because I glossed over a lot of plot details and fun characters that I did not want to give away.

There May Be Danger is one of those novels you should try and discover for yourself, which I can especially recommend to readers who appreciated the more adventurous outings of Agatha Christie's Tommy & Tuppence (e.g. The Secret Adversary (1922) and N or M?, 1941). Or simply are a fan of Jerrold. Or fond of discovering obscure, long-forgotten vintage crime novels. The wonderful Dean Street Press is reissuing the book in January, 2016.

I'll return to the traditional mystery for my next review, but I've not yet decided whether it'll be an impossible crime novel or a war-time mystery.
Geplaatst door TomCat on 12/20/2015