"I knew, as everyone knows, that the easiest way to attract a crowd is to let it be known that at a given time and a given place some one is going to attempt something that in the event of failure will mean sudden death."
- Harry Houdini

Daniel Stashower is a freelance journalist and an award-winning author of such biographical works as Teller of Tales: The Life of Arthur Conan Doyle (1999) and The Beautiful Cigar Girl: Mary Rogers, Edgar Allan Poe and the Invention of Murder (2006), but Stashower is probably better known for several historical crime novels – usually with Harry Houdini as one of the main protagonists.

I had previously only read Elephants in the Distance (1989), which is a memorable and excellent standalone about a reunion of elderly magicians that came with a body count. It's one of those post-GAD mysteries, read during my pre-blogging days, that suggested that, perhaps, not everything published after 1960 was complete and utter tripe. 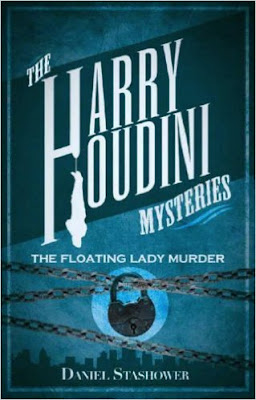 However, I took my sweet time in returning to Stashower, but the Harry Houdini mysteries have always been in my peripheral. There was something about the plot descriptions I found intriguing and captivating. If only I can remember what exactly it was. Oh, yes: the impossible crimes!

The Floating Lady Murder (2000) is the second of three historical mystery novels about Harry Houdini, which is book-ended by The Dime Museum Murders (1999) and The Houdini Specter (2001), but the detective turned out to be Theodore "Dash" Hardeen – who was Houdini's younger brother and an accomplished escape artist/magician himself. Interestingly, Hardeen is also the chronicler and therefore assumes the roles of both Sherlock Holmes and Dr. Watson.

I picked The Floating Lady Murder for one simple reason: the seemingly impossible situation sounded epic and one-of-a-kind!

The book opens in 1898 and Dash, in the function as Harry's manager, spots a notice in the New York Dramatic Mirror, in which opportunities are offered with the "Dean of American Magicians," Harry Kellar, for the '98-'99 season, but his brother resists on account that "The Great Houdini is no mere stagehand" or "a simple lackey to be ordered about." It takes a bit of manipulation from Harry's wife to change his mind to go to the audition.

Well, they're taken in after helping subdue an escaped lion, but Houdini's mind is as welcome a presence as his nerves of steel, because Kellar is staring a problem in the face: he wants to debut the lifelong dream of his late mentor, "The Wizard of Kalliffa," which is the illusion of the floating lady and he came very close a quarter of century before – except that tragedy intervened and his wife plunged to her death. Kellar had patiently waited his entire professional career for mechanical engineering to evolve to the point it would deliver "necessary mechanics" to complete the trick, but, at the dawn of the twentieth century, there are rival magicians working on a similar trick. The illusion is far from perfect (or even complete) and a deadline is looming at the horizon.

A good chunk of the first half of The Floating Lady Murder consists of Houdini, Dash and Bess being ingrained into the group and helping to perfect the illusion as they prepare for opening night. That’s where the trouble really begins.

"Now she is almost beyond our earthly grasp," echoes the voice of the old magician on opening night, "surely the gods themselves must watch in wonder as she floats up towards the vault of heaven," but the astonished audience becomes horrified when something goes horribly wrong. Everyone watched in horror as the hovering figure "dipped and tossed" as "though it were a marionette whose strings were being snapped one by one" and finally the floating lady plummeted seventy-two feet to her death.

On first appearance, Miss Moore death seems like a tragic and unfortunate accident, but a post-mortem examination reveals the presence of water in her lungs and there can only be one conclusion drawn from that – she drowned in mid-air! It's not an accident, but an impossible crime and a blatant one at that!

First of all, I want to note here that Stashower crafted a fine and well-characterized historical novel, wonderfully capturing the spirit of the era, but as a detective story it did not entirely conform to the basic rules of fair pay. I can forgive Hardeen for withholding the tell-all clue he found in the newspaper morgue, but I was a bit miffed when I found out I had been shooed away from the correct explanation for the "aerial wizardry" that caused the mid-air drowning. There's basically one logical answer for this apparent miracle, but there's a character who swears that explanation was as impossible as the situation itself, which made my hope rise for an original explanation and labor on an intricate solution of myself. However, the ending revealed that the solution did run along the lines of that one logical answer and clues to it where not fairly shared with the reader.

It's kind of understandable why Stashower played those cards close to his chest, because revealing them would've given the entire game away well before the end, but this blog uses the Golden Age standard and therefore I'm obliged to nitpick about the fairness of the plot.

I did enjoy the book as a whole, but I wish the plot had adhered to the rules of Golden Age fair play, because I had the sincere hope The Floating Lady Murder would reveal itself as a companion to John Sladek's Black Aura (1974) – which has a similar, but fairly-clued, miracle problem about a mid-air murder.

However, I will not be deterred from trying the other two books in the Harry Houdini series, which have apparently more traditional locked room problems. So this will be continued!
Geplaatst door TomCat on 12/14/2015