Previously, I reviewed a book recommended by "JJ" of The Invisible Event, namely Impossible Bliss (2001), which was written by Lee Sheldon, a game designer and scriptwriter, who published the book independently, but the overall quality of the story is notably better than your average self-published novel – particularly the splendid detective-character, Herman Bliss. Sheldon stumbled across JJ's review and left some interesting comments. 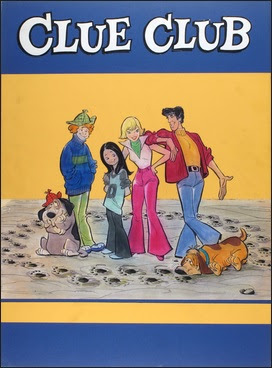 In one of his comments, Sheldon posted a list of all the impossible crime fiction he has written and tacked on some brief, but enticing, plot-description. A story-line from the mystery-themed soap opera, The Edge of Night, has a "murder by strangulation with a chain in a gazebo surrounded by snow" with "only the victim's footprints leading to the gazebo." There are a number of episodes from Blacke's Magic listed and an unpublished, untitled short story about a murder inside "a glass revolving door" with only "the victim inside and police both inside and out." Surprisingly, the one that intrigued me the most came from an obscure, 1970s cartoon show.

The Real Gone Gondola (1976) is the third episode of the Hanna-Barbera produced Clue Club, a bargain basement Scooby-Doo and Scrappy-Doo, which has an elderly, wheelchair bound woman evaporating from a closely observed ski-lift gondola as it rises up a mountain – commenting that he's certain that "the solution to this one has never been used." I'm afraid I have some bad news about that, but I'll get to that later.

Clue Club originally aired on CBS from August 14, 1976 to September 3, 1977 and had replaced Scooby-Doo, Where Are You! in the Saturday morning lineup.

The one-season series had sixteen episodes that followed the escapades of a group of teenage detectives, Larry, Pepper, D.D. and Dottie, who are accompanied by two dogs, Woofer and Whimper. The dogs here can only talk with each other, but the whole setup really can only be described as a discount Scooby-Doo. This made the cleverly constructed puzzle of a vanishing woman from a moving, closely observed gondola stand out like a sore thumb. Who would expect an authentic impossible disappearance with actual clues in an obscure cartoon show like this?

Mrs. Coldwell is the elderly, wheelchair bound woman and owner of the Blizzard Mountain ski resort, but lately, she has been receiving threatening letters from "some cook," signing his letters as Vortex, demanding two million dollars – or else "he'll disintegrate her." Sheriff Bagley and Larry of the Clue Club watch how Mrs. Coldwell is wheeled into the gondola by her nephew, Tom Coldwell, who goes back to fetch her a blanket, but she already started the gondola when he comes running back. And when it reached the top of the mountain, Sheriff Bagley and Larry are greeted by an empty wheelchair with a hat and a pile of clothes on it! Vortex had made good on his promise! 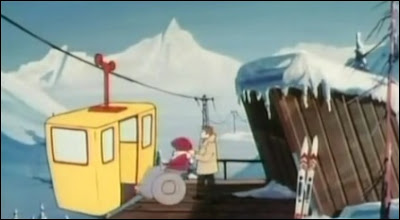 Admittedly, this is a grand premise for an impossible crime and this series has no right to something as good as this, but it didn't stop with a neatly posed and baffling disappearance.

A false solution is (briefly) raised when it was suggested Mrs. Coldwell could have been moved into an adjacent gondola traveling downward, which is not a bad idea had the door of the downward gondola not have been on the opposite side. Even then, you probably would not have enough time to make the switch. There are clues to the two, separate parts of the vanishing-trick. The clue to the first part of the trick is one of those tell-tale clues that practically tell you all that you need to know and showed that the obvious suspect was indeed guilty, but the target audience probably wouldn't be able to figure out the second part – which is more technical in nature. So the impossible problem really stands as something exceptionally good in an otherwise mediocre, knock-off cartoon.

A second, quasi-impossible situation occurs when the Clue Club encounters a snow mobile patrolling the area, but without a driver on it. You can easily guess the solution to this one. However, it was a nice little extra and sort of is another nod at the guilt of the culprit. The rest of the episode is fluff and filler with the two dogs acting as comedy fodder. Mrs. Coldwell's disappearance from a closed, moving and watched gondola is the only reason to watch this episode. So only to be recommended to locked room and impossible crime addicts.

Sheldon had said he was certain the solution to this impossible situation has never been used and mentioned here above that I had some bad news. Well, it has been used before. More than once. There's a short story from the same period as this episode that uses exactly the same trick and a locked room novel from 1942 uses an interesting variation. Another variation on this idea can be found in locked room novel from 1940.

So not exactly a first, but still a well done impossible crime story that deserved a better medium than this show to be told in.

Lastly, Sheldon wrote another locked room mystery for Clue Club, entitled The Walking House Caper (1976), in which an "impregnable safe built in a room vanishes" even though "it is too large to pass through any doors or windows." So I might return to this series for just that one episode, but first I want to see if I can track down those Edge of Midnight episodes.
Geplaatst door TomCat on 10/07/2018