Christopher St. John Sprigg was a British writer who left school at the age of fifteen to work as a cub reporter on a now defunct newspaper, Yorkshire Observer, where his father had been a literary editor, before becoming the editor of British Malaya, but earned his literary stripes as a young, versatile novelist – writing reams of poetry, ghost stories, plays and aeronautics textbooks. During a brief, five-year period in the 1930s, Sprigg produced seven well received, highly regarded and cleverly constructed detective novels. 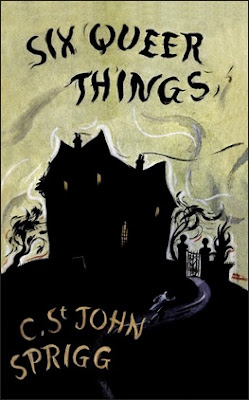 Some of them were praised by Dorothy L. Sayers for being "full of good puzzles" and bubbling with "zest and vitality."

Unfortunately, Sprigg contracted Marxism in 1934 and came to regard his detective fiction as trash he wrote to make money. Two years later, he joined the International Brigade to fight in the Spanish Civil War against General Francisco Franco, where he became a machine-gun instructor and editor of the Battalion Wall, but was tragically killed on his first day in the field – during the Battle of Jarama in February, 1937. I guess you could say communism kills.

Sprigg's untimely passing plunged his mystery novels into total obscurity and his books became scarce, expensive and hard to come by for regular readers. Ironically, this meant his books were primarily accessible to deep-pocketed collectors. Until recently, that is.

Back in 2015, British Library Crime Classics reissued Death of an Airman (1935) and earlier this year Valancourt Books published The Six Queer Things (1937). By the time this blog-post goes live, Moonstone Press has probably printed brand new editions of Crime in Kensington (1933), The Perfect Alibi (1934) and Death of a Queen (1935). So Sprigg is gradually being wrested from the dust of obscurity and wanted to knock The Six Queer Things from my list before the Moonstone Press releases become available.

The Six Queer Things was Sprigg's last, posthumously published detective novel and the story dragged the Victorian-era damsel-in-distress into the Golden Age with an eclectic plot encompassing mystery, suspense, fake occultism and an impossible poisoning – which tempted me to place the book in the John Dickson Carr-Hake Talbot school of detective-fiction. However, the dark, grim and humorless tone made it inherently different from Carr's wondrous "Baghdad-on-the-Thames" stories or Talbot's delightfully, thrill-filled hair-raisers. So what made this menacing, claustrophobic and often unpleasant story a great, but unusual, read was its excellent story-telling and plotting.

Miss Majorie Easton is a twenty-year-old, junior shorthand typist earning a modest wage at the Brixton Cardboard Box Works and is engaged to be married to Ted Wainwright. A young, hardworking man expected to become a foreman in the press shop of Bilford Metal Furniture Company, but, until they can afford it, Majorie has to live with her "stingy louse" of an uncle, Samuel Burton.

During one of their arguments over money, Burton tells her its time to stand on her own two feet and find a job that has more to offer than a 26-shillings-a-week salary. Shortly after this confrontation, Majorie is approached in a tea shop by a curious-looking, yellow-faced man and his sister, Michael and Bella Crispin – who tell her she may possess a talent of which she had been unaware. And they offer her a well paying job as their research assistant. Michael and Bella Crispin are psychical researchers and have gathered a group around them, Immortality Circle, with whom they hold weekly séances at their home. The only strings attached is that Majorie has to live with the Crispins and be available to them at all times of the day. 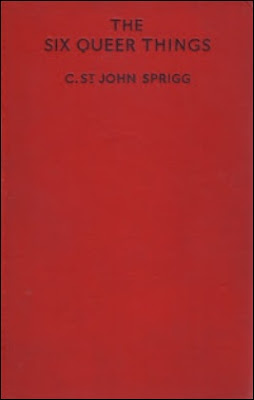 Slowly, but surely, Majorie becomes a believer as "phosphorescent shapes" took "visible bodily form" before her eyes. She witnessed how "disembodied voices" gradually acquired "an ectoplasmic face" and had felt "the touch of spirit hands." Even the ghostly, disembodied voice of her dead mother spoke to her through Crispin. Majorie eventually begins to develop her own mediumistic abilities, but in the process she began "to become more isolated" and "withdrawn into herself." This severed all her ties to the outside world and isolated her from Ted.

I suppose the most experienced mystery readers probably has an inkling of what's going on in that house, but these events are only the preliminaries and the story becomes really interesting, as well as more complex, towards the end of the first half – when the séance room becomes the stage of an apparently impossible poisoning. Once Majorie stopped attending the séances, Ted infiltrates the circle under the name of George Robinson. At the end of one of these séances, an exhausted Crispin asks Ted to get him a glass of water from the little sink and tap in the corner of the room. Ted went to the sink and held a glass under the tap, rinsing it out once or twice, before filling it. Then he brought it to Crispin, but, as he sipped the water, yelled out "you devil" and accused Ted of having poisoned him. After this accusation, Crispin dropped to the ground, convulsed and died!

This is the point where the plot splits in two distinctively different, but closely intertwined, story-lines combining police detection with a stiff dose of dark suspense.

Detective-Inspector Charles Morgan is a meticulous, detail-oriented policeman who tackles the detection end of the plot and has to find an answer to a number of pressing questions. Such as how it was possible that "clear, unpoisoned water had flowed out of the tap," but when it reached Crispin it contained a large dose of strychnine. Why was a small bottle with traces of prussic acid found in Ted's pocket? What is the meaning behind the six queer things Morgan found in a locked drawer Where are Bella and Majorie? They disappeared around the time of the murder and Morgan's investigation is interspersed with scenes of Majorie being held captive, which gives the plot its Gothic resonance, but can't tell too much about this end of the story without giving anything away. However, I can say that the suspense part of the plot was very well written and handled.

Most surprisingly, Morgan's meticulous detective work and the technical nature of the impossible poisoning-trick in the séance room (largely) reminded me of John Rhode's plotting-style (c.f. Invisible Weapons, 1938), which the unimaginative, fact-based policeman solved by an unexpected hunch "without any basis in hard fact" – which he uncharacteristically followed with "a shamefaced feeling." Perhaps the only real hint of humor in the whole story. Only facet of the plot that let me down was the explanation for the titular six queer things. I had expected more from these items, but that's my only real complaint. And a very minor complaint at that.

So, all in all, The Six Queer Things is a suspensefully written, solidly crafted story of detection and suspense, dripping with sinister gloom, which successfully transplanted the anxious, Gothic-style damsel-in-distress to the genre's Golden Age. The Six Queer Things certainly is not your typical, traditionally-styled impossible crime novel, but turned to be a surprisingly good and rewarding read. One that has made look forward to the upcoming reprints. Definitely recommended.
Geplaatst door TomCat on 10/01/2018