Specialist in the Impossible: "Sorcery in the Death House" (1943) by Curtiss T. Gardner

Curtiss T. Gardner is a now obscure, long-forgotten mystery and pulp writer from Maryland, United States, who wrote short stories during the 1940s for such magazines as Thrilling Detective, Popular Detective and G-Men Detective. Gardner also penned a few detective novels and Anthony Boucher noted that he introduced "the first big business detective on record" in Bones Don't Lie (1946), but not much else known about him or his work.

However, I made an interesting discovery when thumbing through my copy of Robert Adey's Locked Room Murders (1991) and came across four entries for Gardner, all of them short stories, of which three belonged to a series with an intriguing sounding protagonist, Val Vickers – who's known as "the one and only Specialist in the Impossible." This short-lived series was originally published in Dime Mystery, from 1943 to 1944, which had some fascinating, pulp-like premises. 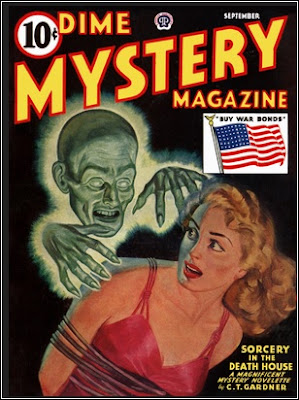 "Satan's Insidious Chessmen" has a murder with a poisoned dart in a room in which the victim was alone playing chess with an automaton and "In Bed We Die" concerns a death by electrocution in a house where a storm had taken out the main electrical power supply. But the first of these three stories, entitled "Sorcery in the Death House," had a locked room situation I simply had to read for myself.

"Sorcery in the Death House" was originally published in the September, 1943, issue of Dime Mystery and can be read on archive.org.

Val Vickers is asked to put a stop to an arch-criminal, named Merlin the Wizard, who has already spirited two condemned men from the electric chair in the death house and it looked as if it was done by magic, but Vickers is of the opinion that, "whatever laws Merlin may have broken," the "laws of nature aren't among them" – which is why he's attending the execution of Pete Audia with a concealed photographic apparatus. So he can immortalize the vanishing-trick on the photographic plate.

Just like on the previous occasions, the "glaring death house lights went black" and "a flash of fire puffed up from in front of the death chair." When the lights came back on in the smoke-filled execution chamber, there was a wounded guard on the ground and the death chair was empty! There is, however, not a nook or cranny in the death house "to conceal a broom stick" and the exists were being guarded, but Audia is nowhere to be found on the premises of the prison. Once again, Merlin has saved a condemned murderer from the electric chair.

Vickers succeeded in snapping a picture when the lights went out, but the murderer assaults him in the dark room and the photographic plate is destroyed. So he has to do it the old-fashioned way and reason his way to an explanation, which is path fraught with danger and botches an attempt to catch Merling using another condemned prisoner as bait. He also has to tangle with a beautiful woman, Marylee Church. Basically everything you'd expect from a pulp-detective.

Adey unfairly dismisses this story as "pretty feeble." Sure, the locked room trick, which is the main attraction of the story, is not one of the all-time greats on par with the best from John Dickson Carr and Edward D. Hoch. Nonetheless, this was perhaps the only way you could make a condemned prisoner, strapped to Old Sparky, disappear from the death house and nearly all of the components of the trick fitted the information supplied to reader – which deserved the proverbial A for effort. And the motive for helping condemned murderers escape the chair has a shimmer of originality to it.

My only complaint is that the death house setting was not played up to its full, sinister effect. Just imagine how different this story would have read had it been written by Carr. Even if exactly the same solution was used.

So, all in all, not one of the greatest locked room mysteries ever written, but still a fairly good, fun and pulpy detective story with a great setting that could perhaps have been better exploited. Nevertheless, I'll definitely be returning to Gardner in the hopefully not so distant future, because Wildside Press has reissued the previously mentioned Bones Don't Lie. Of course, I'll be on the lookout for the other Val Vickers stories.

On a final, semi-related note: Bill Pronzini has written a great short story, "The Arrowmont Prison Riddle," collected in All But Impossible (1981), in which a condemned prisoner has a noose placed round his neck and the trapdoor is sprung, but the locked and guarded execution shed underneath is scaffold is found to be empty – somehow, as the trapdoor opened, the prisoner simply vanished into thin air! Pronzini's solution is more original and involved than the one found in Gardner's "Sorcery in the Death House." So you might want to check that one out.
Geplaatst door TomCat on 10/12/2018