Last year, my fellow impossible crime addict, "JJ" of The Invisible Event, posted a review in one of his ongoing series, "Adventures in Self-Publishing," which bravely tackles independently published detective novels. A corner of publishing industry that is not always synonymous with quality, but this time around, he unearthed a minor gem. 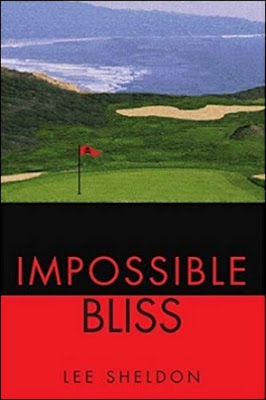 Lee Sheldon is an American game designer, television producer and scriptwriter, who happened to write the screenplay for a particular Blacke's Magic episode, Address Unknown (1986), which I reviewed back in late 2016 and concerned the inexplicable disappearance of an entire street – akin to John Dickson Carr's The Lost Gallows (1931) and Paul Halter's La ruelle fantôme (The Phantom Passage, 2005). However, this was not the only time Sheldon brought the impossible crime story to the small screen.

Sheldon penned an Edgar nominated episode of the short-lived The Eddie Capra Mysteries, entitled Murder on the Flip Side, that has a locked room murder with the only possible suspect being entirely innocent. He also introduced the locked room conundrum in further episodes of Blacke's Magic, Charlie's Angels, The Edge of Night and Father Murphy. What's even more interesting is that Sheldon used to collect first editions of impossible crime novels. A collection that included "a complete run of Carr" with "the Roger Fairbairn book" and was a credited contributor to the second, revised edition of Robert Adey's recently reissued Locked Room Murders (1991).

So with credentials like these, it was only a matter of time before Sheldon signed his name to a full-fledged impossible crime novel of his own. You can clearly see Carr's influence on Sheldon in the detective-character of Impossible Bliss (2001).

Herman de Portola Bliss is an often blunt, capricious and impossible character cut from the same cloth as Carter Dickson's Sir Henry Merrivale and Christopher Fowler's Arthur Bryant. Bliss is presented to the reader as "an atrocious painter" and "an unrepentant felon" with an extensive arrest record for numerous misdemeanors such as "trespassing, loitering, public nuisances, inciting to riot" and "even public indecency" – a list of complaints that numbered "close to four hundred." A record for petty criminality, but none of these cases ever reached the court. You have to read for yourself to find out why Bliss never went in front of a judge for his behavior.

One of the characters described Bliss as a clinging vine who "prods and pushes his way into cracks of your life until there's no dislodging him." Newly appointed Chief of Police of Carmel, California, Dan Shepard, finds this out the hard way when Bliss turns up as a witness when he looked into a bizarre disappearance.

Impossible Bliss begins with four businessmen, Alex Wagner, Loren Holly, Ben Webb and Leonard Romaine, strolling onto the golf course of the luxurious Carmel Bay Country Club for an early morning round of golf. Wagner is a mediocre golfer and one of his shots landed in the bunker. So he took a sand wedge from his bag, climbed inside the sand trap and the ball came sailing out of the trap, which landed eight feet from the pin and rolled into the cup for his par – a "miraculous shot." However, Wagner never emerged from the trap to gloat and, when they went over to look, he had simply disappeared. Something that simply could not have happened. A single set of tracks lead from the fairway to the edge of the bunker and the only way out of the bunker, unseen by onlookers, was over a patch of "thickly woven grass" with "a heavy rime of dew." Or to put it more simply, the grass was not walked or crawled over at the time Wagner was miraculously spirited away from the spot. And then there's the painter who had been overlooking the scene from a hillside, Herman Bliss!

Chief of Police Dan Shepard had read Bliss' police file, a hefty tome, but this had hardly prepared the poor man from unexpected, face-to-face encounter with the man. Bliss immediately clung to Shepard like catch-weed and immediately started shooting roots in his investigation, which he does in his own, inimitable manner that includes burglary and impersonating a police officer. Shepard is an honest, straight-laced policeman, who earned his position, but all of his attempts to hold Bliss legally accountable for his action were doomed to fail – even placing him under arrest barely slowed him down. Just imagine Merrivale in The Skeleton in the Clock (1948) and Graveyard to Let (1949), but without the angelic pretense of being "a good as gold" and "not bothering anybody." This unlikely alliance between Bliss and Shepard is undoubtedly the main attraction of the book.

A good second is the double (quasi) impossibility of Wagner's disappearance from the bunker and the miraculously golf shot he made before second before, which tied together nicely and are properly motivated. I agree with JJ that near-impossible golf shot helped the overall effect of vanishing-trick. I don't believe the trick, by itself, would help the book get onto a top 10 list of all-time best impossible crime novels, but it was a pretty decent trick and obviously inspired by one of the Merrivale titles – only in reverse. Or maybe I remember the trick differently, because JJ definitely had another Carr title in mind.

There's a good reason why these impossibilities had to happen and the whole scheme was cleverly screwed together with a great back-story and backdrop, but only marred by its uneven, even unfair clueing. Some aspects of the plot were definitely foreshadowed. However, this was hardly enough for the reader to figure out the who or why of the plot. You can't really lock-in on the murderer and the motive, arising from that great back-story, is given very late in the game.

So this one is best read for the nuts and bolts of the crime or for the exploits of the impossible Bliss. Either way, you won't be disappointed.

Two quick observations, the story struck me as being a good 10-15 years older than the publishing date suggests. There are references to DNA in the story, but forensics were primarily working with the victim's blood group and could have been written-in when Sheldon revised and updated the final draft – before it was finally published. The story read as one of those 1980s locked room novels. Secondly, Sheldon treats his readers to a mental image of Bliss playing tennis and I have not seen a character make a ball travel “according to its own physical laws” since I attempted to watch Prince of Tennis.

On a whole, I very much liked and enjoyed reading Impossible Bliss. The clueing could have been a lot fairer, where the murderer and motive are concerned, but the problem of the evaporated golfer and his miraculous shot are the meat of the plot. And they were clued. Sheldon is a good egg who showed here that, even in this day and age, there's still room on the printed page for the figure of the Great Detective. I sincerely hope he finds a publisher for The Beast of Big Sur, because I would like to see Herman Bliss return. He also has an unpublished short story about the impossible stabbing in a glass revolving door. S-should we start pestering John Pugmire?
Geplaatst door TomCat on 10/04/2018