Earlier this month, I reviewed The Six Queer Things (1936) by Christopher St. John Sprigg and pointed to the upcoming releases of Crime in Kensington (1933), The Perfect Alibi (1934) and Death of a Queen (1935), published by Moonstone Press, but the release date of September 10, 2018, came and went without them becoming available – leaving me a little bit disappointed. Fortunately, there was an unexpected surprise when another publisher reissued two of the titles I had been most looking forward to reading! 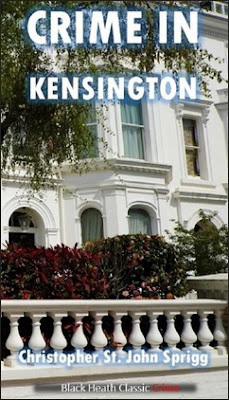 Black Heath has a miscellaneous catalog of Golden Age detective novels and turn-of-the-century thrillers of varying quality. There are some really good or intriguing titles on their list, such as Edward Gellibrand's The Windblow Mystery (1926), John V. Turner's Death Must Have Laughed (1932) and Nicholas Brady's outlandishly fantastic The Fair Murder (1933), but the overall quality has now risen with the single addition of Sprigg.

As of this writing, Black Heath has reissued Crime in Kensington and Death of a Queen. Hopefully, more will follow suit!

I picked the first mystery novel Sprigg ever published, Crime in Kensington, published in the United States under the suitable title Pass the Body, which always struck me as a must read for every self-respecting locked room fanboy, but John Norris, of Pretty Sinister Books, said in the comments on my review of Death of an Airman (1935) that he was not sure it was for me – warning me that I might find "the solution uninspired and underwhelming." Sure, the locked room trick was childishly easy to figure out, but the plot had so much more to offer than just an apparently miraculous disappearance. John was not entirely right this time. Did you read that, John? You were more wrong than right on this one. Suck on that!

Crime in Kensington reminded me of a lighter, but still darkly humorous, English counterpart of Anita Blackmon's Murder á la Richelieu (1937), which shares a very similar setting that becomes the backdrop of a clever, dark and gruesome crime.

Charles Venables is a monocled policeman-turned-journalist who currently works as a gossip-columnist for the Mercury, a powerful newspaper, that brings him to London. A long-time friend and romantic interest, Lady Viola Merritt, who works as a commercial artist from a residential hotel in Kensington invites him to take rooms at The Garden Hotel. She describes it as a comfortable, amazingly cheap hotel, but "there is something weird about the place" that she can't quite make out. And filled with "such odd people."

The moment Venables walked into The Garden Hotel it was like entering "the plot of a thriller of the vulgarest and most exciting description." Venables overhears how the husband of the proprietress, Mrs. Budge, threatened to slit her throat from ear to ear and meets a slightly sinister-looking, one-eyed Egyptian, named Eppoliki, who recognizes Venables – asking him if their "little hostess's game is up." Later that evening, Mrs. Budge has been put to bed with pleurisy. Or, as we so eloquently say in my country, de pleuris staat op het punt van uitbreken in The Garden Hotel. It's our way of saying shit is about to hit the fan. :)

That evening, Nurse Evans sees how Miss Sanctuary put her head round the door of the sick-room to say that Mrs. Budge is sleeping nicely when "a gloved hand emerged round the edge of the door" and "fastened about her throat." A long, drawn-out scream is followed by the slamming and locking of the door. When the door is opened by shooting the lock, Mrs. Budge and Miss Sanctuary have inexplicably vanished! 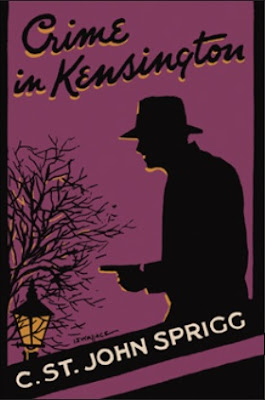 Venables is on the premise when this happened and is tasked by the Chief of the Mercury to get an angle on the case before the police, which allows him to rise from the position a special, on-the-scene correspondent to the star crime-reporter of the Mercury. Despite his monocle, wit and somewhat pompous appearance, Venables is a very different and more likable character than the detective he was obviously based on, Dorothy L. Sayers' Lord Peter Wimsey. You can really warm to him as a detective-character and he works together very well with the competent Detective Inspector Bernard Bray of Scotland Yard. Even though the latter makes a mistake or two when suspects where on the verge of spilling the beans about the hotel.

The police can do very little at this point in the story, as they have nothing to go on, but this changes when one of the hotel guests decided to hold a séance.

Miss Mumby is a terribly rich, elderly lady who "spends all her money on séances and cats" and her rooms are covered in either cat hairs or cat images. She has a large black tomcat with a torn earn, named Socrates, who she attempted to use as a bloodhound to find the missing proprietress without much success. Socrates also has a role to play at the séance, who went beserk towards the end, which lead to a gruesome discovery that lead to the police turning the hotel inside out – effectively turning their inquiry into a murder investigation. I particularly liked the scene with the hatbox and crowd of sight-seers outside of the hotel. Delightfully dark and comedic.

I can't reveal much more about the plot without giving away any vital information, but Crime in Kensington is obviously the work of a young, talented and promising, but inexperienced, mystery writer who could have become a household name had he stuck with the genre. Obviously, the problem of the locked bedroom is easily penetrated and the identity of the murderer was equally obvious. However, the why was not as easy to figure out and could have kicked myself for missing a blatant clue, or more of a hint, in this regard and then you have the secret of the hotel room, which was genuinely clever and original. Sprigg used a variation on this plot-thread in The Six Queer Things.

And then there's the excellent writing, story-telling, characters and splashes of dark humor. One scene that comes to mind is when Bray entered the room of Rev. Septimus Blood, who's obsessed with reconstructing the Coptic rites, and finds him with an embroidered cone in front of the mirror. So he groans "Oh Lord... another lunatic." That should give you an idea about the characters populating The Garden Hotel.
In summation, Crime in Kensington is a well written, proficiently plotted, but imperfect, debut from a promising mystery writer who, sadly, only got to write seven detective novels and some short stories during his short life. I really enjoyed me time with this book, even if it failed to (fully) fool me. So definitely recommended to everyone who loves a good, old-fashioned detective story.

This leaves me with one problem: what to read next? I want to immediately dip into Death of a Queen, but have already reviewed quite a few locked room novels and short stories recently. So I might do a non-impossible crime before tackling Death of a Queen. However, it's very tempting to do two Sprigg's back-to-back. But we'll see.
Geplaatst door TomCat on 10/22/2018